Running Out of Ammo on Gun Company Stocks 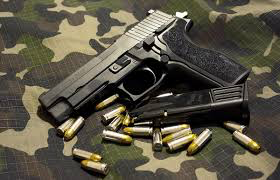 At the last Democratic presidential debates, Beto O’Rourke, former congressman from the state with the highest number of registered guns, said to a roaring and applauding crowd: “Hell, yes, we’re going to take your AR-15, your AK-47.”

This kind of anti-gun sentiment has spread nationwide, and sent the stocks of gun makers plunging. The shares of American Outdoor Brands have fallen over 30% in the last three months to $6.08 and the same is true for Vista Outdoors with share prices at $6.34. Down but less severely is Sturm & Ruger at $42.16, a 25% drop.

“Stock prices are affected by public backlash whenever there are bad headlines, and unfortunately, these events have become more and more prevalent,” said Anthony Campagna, global director of fundamental research at Institutional Shareholder Services.

Stock performance of the three largest publicly traded gun companies over the last 10 years compared to the NASDAQ Composite.

Stock prices have been plunging as anti-gun rhetoric has turned into gun control laws. Last year, shares fell by more than half as more than half of states passed gun restrictions that included raising the minimum age, strengthening background checks, banning assault rifles and high capacity magazines. In New York, gun laws have become so strict that the only thing a gun owner can do with a gun is shoot at the range or wait for an intruder at home. Even in states with fewer barriers to gun ownership, the industry’s largest retailers Walmart and Dick’s recently announced that they will be further restricting their gun sales and inventory.

“When we’re trying to conduct our business and the industry is trying to make firearms for law abiding citizens,” said Mark Oliva, a 25-year veteran of the marines and director of public affairs at National Shooting Sports Foundation, an industry trade group. “And on the national debate stage they say that we are enemies of the United States as an industry. That becomes a big hurdle to overcome.”

Despite the increased anti-gun rhetoric, sales remain strong with gun ownership steady for the last 50 years. Sturm & Ruger is expected to have a revenue of $513.7 million this year, a 3.6% increase. Gun manufacturing who sell more than just guns are projected to take a loss in revenue. American Outdoor Brands is projected to drop by 0.4% to bring in $636 million this year while Vista Outdoors is expected to fall 11.3% with a revenue of $1.8 billion.

The trade war with China has hurt the stocks of American Outdoor Brands and Vista Outdoors.  Both have diversified into selling outdoor recreational gear, most of which is imported from China. This represents one-fifth of their businesses, and it is heavily dependent on a sophisticated supply in China. Since the trade war started, Vista Outdoors stock prices have fallen by two-thirds while American Outdoor Brands has fallen more than 40%. Sturm & Ruger which has stuck to just selling guns has taken less of a hit at 17%.

A sell-off of American Outdoor Brands stocks last month sent share prices to one of its lowest, plunging by over half. In an industry that has tripled production and doubled revenue over the last 30 years, growth is slowing, and the cost to make a gun is rising faster than its price tag. The higher costs that come with being American made has put pressure on profit margins. These factors are key for judging how robust the stock is.

“Coming into an election year there will be a lot of attention paid to how the outcomes of the election will be with the incumbent administration being more favorable to gun makers as opposed to a change that could mean large scale reform or competitive pressures that aren’t currently priced in,” said Campagna, an analyst who watches gun stocks closely.

The crossfire of Trump’s pro-NRA speeches and presidential candidates like Kamala Harris who recently vowed to crack down on guns could push stocks higher over the medium-term, but investors see an apocalypse coming for the Second Amendment.

“The most challenging thing we’re facing right now is the push for those who don’t respect the rights of citizens to keep and bear arms and to infringe upon those rights,” said Oliva. “We see roadblocks being thrown up by politicians who want to infringe upon rights. It’s really difficult when they start to target the industry.”