Too little, too late: Comerica’s failed plan to offset falling rates will drag down main revenue source in 2020 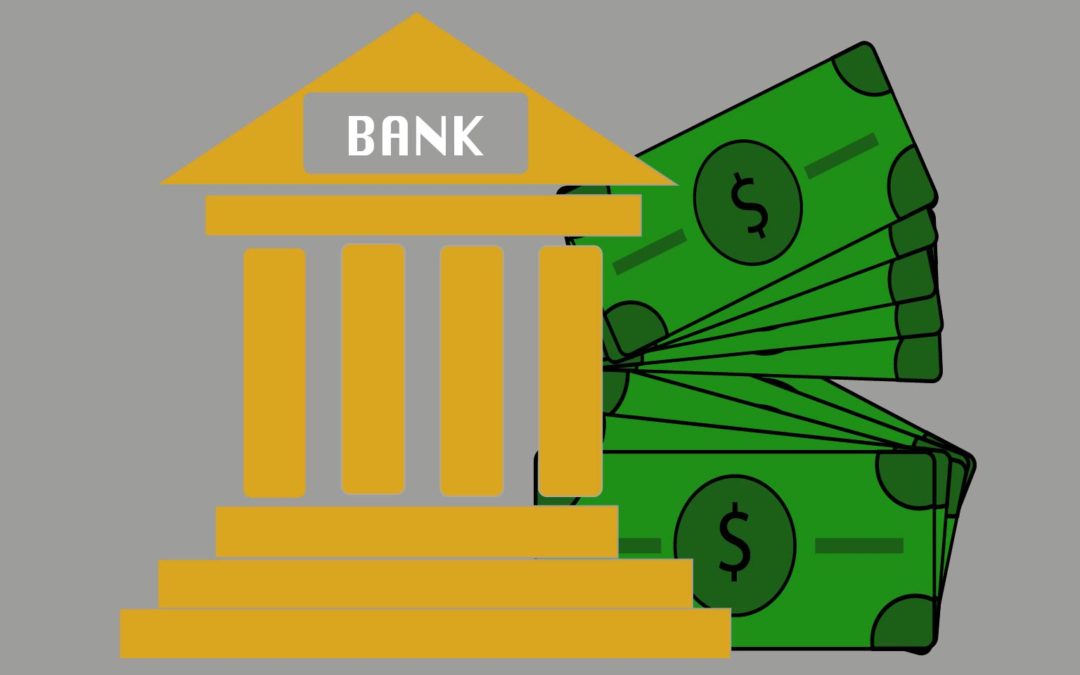 September was a stressful month inside the Dallas headquarters of Comerica Bank. First, chief financial officer Muneera S. Carr departed. Days later, a second U.S. interest rate cut forced Comerica to admit the move would hurt its revenue more than forecast. And by the end of the month, the bank decided to restart a program designed to protect itself from interest rate cuts that it had paused just two months before.

“Their expectation was that rates would continue to go higher,” said Herman Chan, a regional bank equity analyst at Bloomberg Intelligence. “They were caught a little off guard during the summer and fall when the market was pushing for rates to go lower.”

Additional interest rate and credit swaps –– a form of insurance against lower rates –– could have protected from some rate-driven revenue loss, analysts and investors say. Instead, its stock price has lagged and has lowered interest income targets.

In addition, the $30-billion asset bank and others of the same size are struggling to compete with industry behemoths such as JPMorgan Chase & Co. The merger between BB&T Corp. and SunTrust Banks Inc. earlier this year reignited speculation that Comerica would seek a merger. Its size, geographic footprint and concentration of commercial and industrial loans means it’s long been an attractive partner. 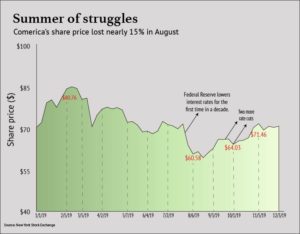 Comerica began its hedging program last spring, scooping up $2.8 billion in interest rate swaps between March and May. The swaps covered just a fraction of the bank’s $72 billion balance sheet. But management paused its hedging program prematurely in the second quarter, before the first of three cuts in late July.

“I do not foresee us adding hedges at this point,” chief executive Curtis Farmer said in the bank’s July earnings call.

Days later, the Fed lowered rates for the first time in a decade, citing a weak global economy and meager inflation. The cuts have cost the bank more than $90 million in each of the past two quarters and sent shares down over the summer.

Lower interest rates often curtail bank profits because they put pressure on the net interest margin, or the difference between the interest charged on loans and that handed out on deposits. Banks can lessen the blow by purchasing products including interest rate swaps, which trade floating-rate assets for fixed-rate ones. More than 80% of Comerica’s loans have a variable rate, or one directly influenced by rate changes.

But Comerica has purchased just $3.8 billion in swaps this year, or less than 10% of its commercial loan portfolio. That’s a stark contrast to regional banks including M&T Bank, an institution with rate protections that cover almost half of their similarly sensitive assets.

Over the past two years, the upstate New York bank added rate protections regularly, giving them more rate control than a bank like Comerica.

“If we could replay the 2020 hindsight here, we’d have probably added more hedges in the latter half of last year,” Farmer said during Comerica’s earnings call in mid-July. “But at that point, there was still a forecast around potential rate increases.” 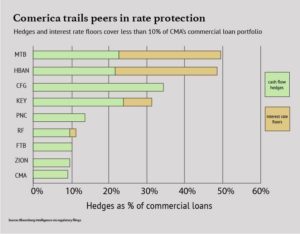 With the market expecting additional fall rate cuts, Comerica scooped up $1 billion in interest rate swaps in September. Even with increased protection, the impact on net interest income increased between the second and third quarters.

“They’re late to the game on that,” said Marty Mosby, a bank research analyst at Vining Sparks. “It could have been done a lot less expensively.”

The bank could have locked in higher lending rates in the second quarter when it chose to shelve its hedging program, Mosby said.

“We are working towards getting to a larger swap or hedged position over time and that we’re going to take a programmatic and measured approach to get there,” Farmer said in an October earnings call. 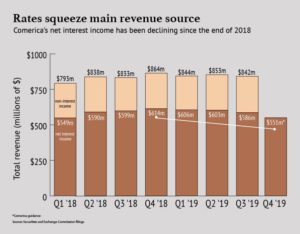 The search for rate protection came amid the departure of chief financial officer Muneera S. Carr, a longtime employee responsible for the bank’s hedging strategy. Carr, the only woman and person of color on the management team, had risen from an accounting fellow to one of the company’s most important leaders.

The company said the end of Carr’s one-and-a-half-year tenure wasn’t caused by a personal or financial disagreement. When pressed during a second-quarter earnings call, chief executive Curtis Farmer sidestepped the question, emphasizing his search for a permanent replacement.

The Fed’s signaling that it would pause rate cuts after its October meeting is unlikely to solve Comerica’s problems. Analysts expect the bank’s net interest income to be squeezed more than that of its peers as low rates continue through 2020.

After two years of double-digit gains, Comerica’s profit growth stalled through the first three quarters of 2019. Net income ticked up less than 1% through the end of September. In the third quarter alone, when two of this year’s three cuts fell, dropped $26 million, or 9%. 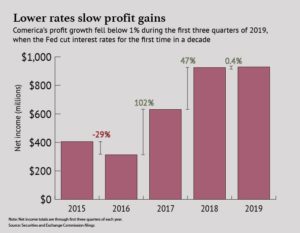 Without a series of share buybacks and cost-cutting measures including layoffs, profits would have decreased, analysts said.

“We expect less-diversified regional banks to pursue M&A as a means to add scale, rationalize costs, and enter new markets,” Pauline Bell, a banking analyst at CFRA Research, wrote in a recent note.