Mired in a Funk, Gap Needs a New Fit in Its Search For a CEO 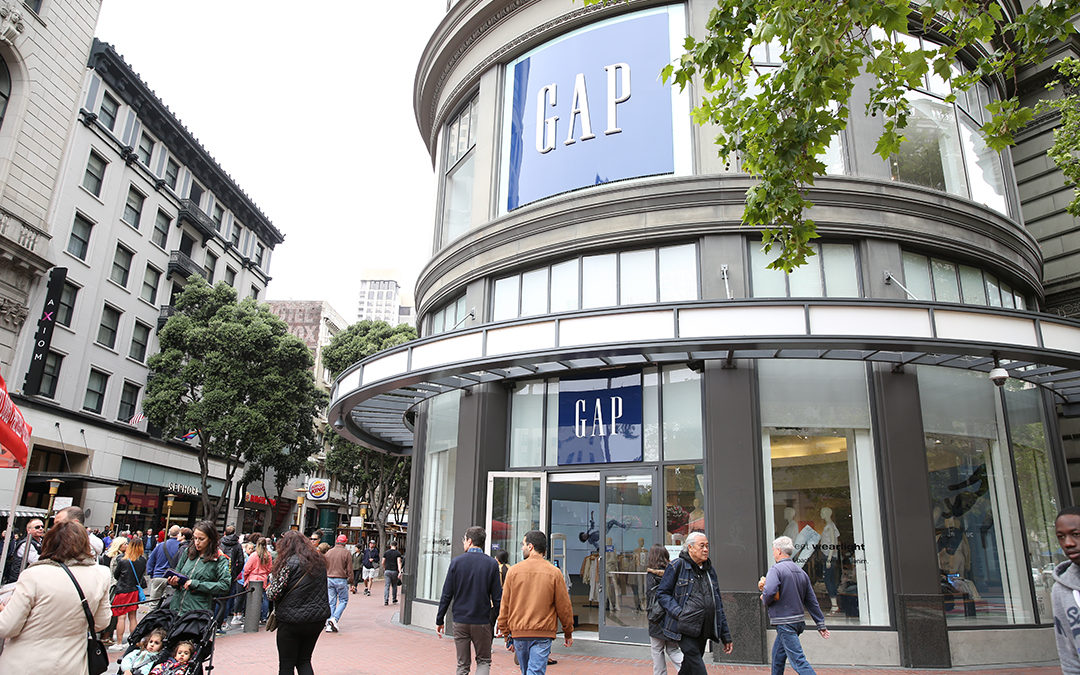 Gap Inc. celebrated its 50th birthday this year, but the golden anniversary is so far looking more like a goose egg.

Once a trendsetter in retail apparel, Gap Inc. has seen its position as a fashion frontrunner fall to the back of the pack under the recent leadership of Art Peck. During Peck’s four years as CEO of Gap Inc., the company’s stock value fell by over half, with Peck unable to win customers or come up with an adequate response to the growing popularity of online clothing retailers, such as Amazon and Everlane.

The combination of steadily declining shares and a long streak of subpar earnings at two of its signature brands finally led to Peck’s ouster in early November. While some industry experts felt the move was overdue, the timing of it still stunned retail watchers, fueling the impression that Gap Inc. was not just operating rudderless, but was in a state of turmoil. 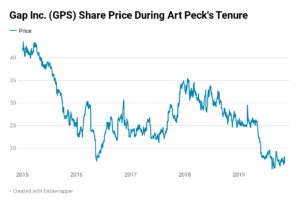 The clothing retailer is possibly at its most pivotal point in history. Earlier this year, it announced plans to spin off what was its most successful unit, Old Navy, into a separate public company next year. At the same time it is dealing with the split, Gap Inc. suddenly finds itself searching for a CEO to lead what will be a slimmer, weaker organization. Its choice of a new chief executive will go far in determining whether Gap Inc. can rebuild itself or joins the likes of Sears and JCPenney – former giants now a shell of their former selves.

“Gap is known for good core basics that are compelling. They have no compelling products. That’s the problem.” said Jennifer Redding, consumer retail analyst at Wedbush Securities.

“You can do basics, no matter what the trends are, except that they’re not. They’re doing something very boring that nobody wants.”

Peck was tapped to lead Gap Inc. in 2014 after more than a decade at the company. One of his first moves as CEO was to fire all of the company’s creative directors, calling them “false messiahs.” Instead, Peck determined that data analysis would be more effective in shaping strategies and product lines. But that data-driven approach yielded little for the bottom line.

“They need to return to the product,” said Redding.

“They gave it up. Art Peck, all he cared about was data and paying consultants. That’s not what they need.”

Peck’s biggest accomplishment was improving the omnichannel retail experience by connecting online shopping with in-store visits to benefit customers.  He was also credited for closing stores and cutting costs. While these moves allowed Gap Inc. to keep pace with competitors in the digital age, they did little to improve sales. 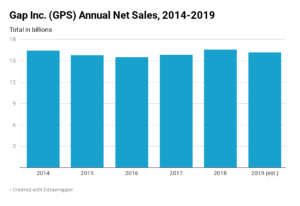 The best performer at Gap Inc. under Peck was the affordable and fast-fashion focused Old Navy, whose profits helped prop up the entire portfolio for years. Comparable same-store sales at Old Navy grew at least 3% for nine straight quarters. The other two high-profile units, Gap and Banana Republic, were sluggish during the same period, consistently posting flat or negative same-store sales.

While Gap and Banana Republic have reputations for higher quality merchandise than Old Navy, their items appeared to barely resonate with customers, apart from the higher prices.

“I think they’re like the same – not long lasting,” said Chinara Abdullayeva, a graduate student at New York University who prefers fast-fashion outlets like Old Navy over Gap and Banana Republic.

“When you pay less, you’re fine with that,” she said.

But Old Navy’s streak of positive sales growth also came to a halt in late 2018, and its financial numbers worsened this year. Comparable same-store sales dropped 4% in the third quarter. Figures were no better at Gap and Banana Republic stores and led Gap Inc. to lower its company earnings guidance for 2019. 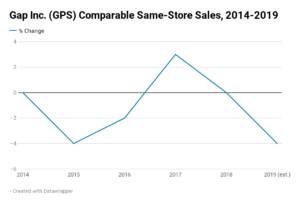 In February, while Old Navy was still riding on a solid 2018, Gap Inc. announced plans to spin it off to “unlock its value.” The company is still planning for the split to occur in the second quarter of 2020 despite Old Navy’s slowdown, but given current challenges, several industry analysts have openly questioned the plan.

“You’re talking about a hugely complicated and expensive transaction, and they have no permanent CEO to do it right now.” said David Swartz, director of consumer equity research at Morningstar.

Gap Inc. so far has offered few hints about an executive succession plan. On the company’s third quarter earnings call, Interim CEO Robert Fisher would only say that both internal and external candidates were being considered. The reticence is par for the course at Gap Inc.

“Gap has always been very scripted – never one to really give a whole lot of details until they’re certain, and they know exactly what’s going on,” said Susan Anderson, analyst at B. Riley FBR.

Reluctance to reveal information about a matter as important as an executive search would normally alarm investors. At Gap Inc., though, shareholders and governance overlap. 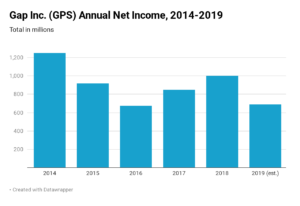 Although publicly owned, Gap Inc. operates much like a family business. The company was founded in San Francisco in 1969 by Donald and Doris Fisher before going public in 1976. Today, the Fisher family still owns 43% of the company, and three of the Fisher brothers hold seats on the 11-member board of directors. Robert Fisher is president of the board and became Interim CEO after Peck’s dismissal.

The nomination of Fisher, rather than a current Gap Inc. executive, to serve as Interim CEO, seemed to indicate that Gap Inc. had no preparation or idea of how to deal quickly with a leadership search.

If Gap Inc. wanted to promote from within its own ranks,  Sonia Syngal, current CEO of Old Navy, would be a logical successor. Before running Old Navy, Syngal led the Gap Inc. portfolio’s global supply chain and product-to-market model, and her expertise would be a potential antidote to Peck’s losing approach.

But she had already been named to become CEO of a new publicly-held Old Navy after its 2020 separation, a job considered a big promotion. Syngal has already been hard at work, announcing ambitious plans to open an additional 800 Old Navy stores. A cancellation of the split would risk further internal strife and carry a healthy dose of embarrassment after the spinoff had been promoted with fanfare for months.

With or without Old Navy in the company, the new leader of Gap Inc. will have a formidable task to lead a turnaround and get customers to shop as they did in the late 20th century. The company has struggled to summon the innovation it had in the ‘90s, when Gap khakis were the epitome of cool.

Even when present trends provide a head start, Gap Inc. hasn’t had an answer.

“We’re in this retro ‘90s wave, and they haven’t seemed to be able to capitalize on that,” said Anderson.

“That’s where they came from, so it’s just kind of amazing that they haven’t been able to capitalize on that as much.”