For Jeoff Burris, who lives near Detroit, the heart of the American auto industry, there’s nothing better than his 2018 Ford F-150 pickup truck.

“You got idiots like me who love ‘em,” said Burris, founder of the Metro Detroit Supply Chain, a consulting firm whose clients include major auto suppliers. “I don’t think anything about spending $60,000 on an F-Series pickup truck.”

But not everyone shares Burris’s enthusiasm for Ford Motor Co.

Ford struggles to sell to international buyers, especially in China, the world’s largest auto market, because its vehicles don’t resonate with local preferences. But despite abysmal sales in nearly all markets outside North America, Ford CEO Jim Hackett says he’s confident he can steer Ford’s global business on track, beginning with China. If Ford fails to turnaround sales in China and elsewhere, the automaker could implode, analysts said.

“At the rate they’re going, all they’re going to have left is — I would it call the core, but whatever you want to call it — the body, and that’s North America,” said veteran auto industry consultant Jon Gabrielsen, who likened Ford to a diabetic patient, losing limbs due to lack of circulation. 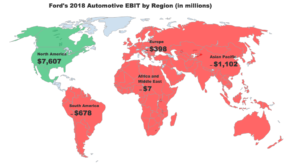 Gabrielsen noted that Ford has lost more than half of its global market share in two decades, dropping from 13.6% in 1998 to 5.9% in 2019, and it may cost too much to simply leave markets where Ford struggles.

China is one of the most cruel markets that Ford needs to win.

“We’re clearly not satisfied with our standing in China, and the team is working exhaustively to return to profitable growth in this important market,” Hackett told analysts in October, after Ford released its third-quarter profits.

Ford’s fight for a bigger share of the Chinese market is emblematic of the automaker’s global problems, experts say. The American automaker has long relied on profits in North America to offset losses elsewhere.

Ford lost $1.8 billion in China in 2018, while earning $7.6 billion in North America, according to filings. 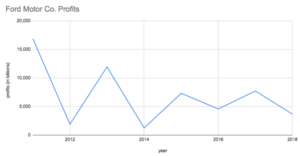 The company’s share of the Asian Pacific market peaked at 4.1% in August 2016, but since has fallen by more than half to 1.7% this year.

Ford isn’t the only American automaker losing its grip on the Chinese market. U.S. automakers’ share of the Chinese market is shrinking overall, falling to 9.5% in September 2019 from 10.7% just a year earlier, according to the China Association of Automobile Manufacturers.

Volkswagen, the German automaker, is currently the number one seller in China, followed by GM, a longtime U.S. competitor. Ford trails in third.

Both GM and Volkswagen became established in the Chinese auto market much earlier than Ford, which has since been playing catch up.

“They got behind and it’s just hard to catch up,” said Burris, noting that GM got a jump start with the aid of government connections and a strong chief executive. Burris also said that cycling through executives happens more frequently outside the U.S., and that’s been the case for Ford in China.

Electric vehicles are a key sector in China, and GM and Volkswagen capitalized on it by selling multiple models to satisfy local tastes. Ford, on the other hand, barely introduced its first electric vehicle, the Territory, in June.

In October, in an attempt to revitalize business in the Asian Pacific, Ford created a stand-alone business, Ford China, and appointed Anning Chen as its president and CEO, “a newly created position focused on driving sustainable value creation,” according to a Ford press release.

Ford’s shakeup in China comes amid the automaker’s ambitious, multi-year $11.5 billion restructuring of its global enterprise. Since Hackett took the helm in 2017, the automaker has closed manufacturing plants in Asia, Europe and North and South America. The company has entered partnerships in sluggish markets, such as India. Additionally, thousands of employees worldwide have been laid off, including in the United States. 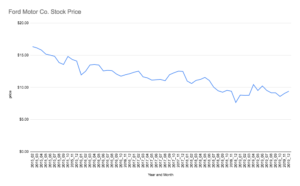 It’s hard to tell how much of an impact Ford’s global restructuring efforts will have on business, Burris said, but in “30 years of living through this boom and bust stuff, it never ceases to amaze me that when times are good they add too many people, and they end up having to take people out, and it creates almost a perpetual state of restructuring.”

When that happens, vehicle launches get delayed and other problems arise, Burris added.

The automaker recently delayed the rollout of its 2020 Ford Explorer SUV after experiencing problems at an assembly plant in Chicago.

Hacket’s efforts have surely slimmed down Ford’s international operations, but it isn’t clear where this will lead the company in the future. 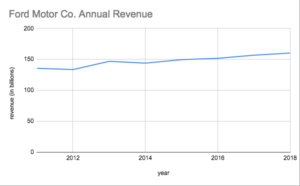 One analyst doesn’t see a bright future for Ford at all, going as far as calling the automaker’s entire global restructuring plan “20 years too late.”

“I predict that before the next auto downturn has run its course, whenever that may be, Ford will have been through bankruptcy and either have its remains acquired by another non-U.S. automaker, or all that will remain is a very weak North America-only maker of SUVs and light trucks,” Gabrielsen said.

As Ford looks to the future, the automaker will continue to focus on improving international sales. Buyers, ultimately, will decide Ford’s fate.

Burris, the Ford-loving consultant, is thankful the automaker at least has the F-series lineup going forward, because without those trucks, which have sustained automaker’s profits, he said, “Ford wouldn’t exist today.” 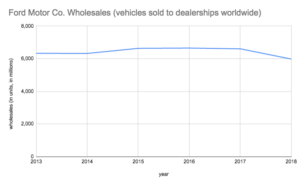