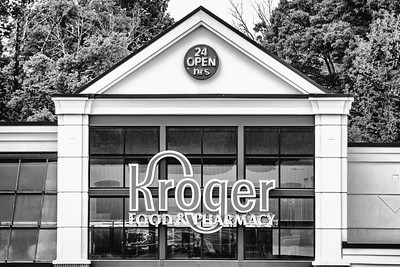 Knowing that online shopping had to be part of its future, Kroger in 2018 had announced a plan to build robotic customer fulfillment centers across the country through an exclusive partnership with British online-only grocer Ocado.

When the pandemic swept the country earlier this year and online grocery sales soared, Kroger should have been prepared to meet the demand.

“Customers are at the center of everything we do and, as a result, we are growing market share,” CEO Rodney McMullen said in the most recent second quarter earnings call. “Kroger’s strong digital business is a key contributor to this growth, as the investments made to expand our digital ecosystem are resonating with customers.”

But the company’s efforts to grow in the e-commerce space are way behind schedule, raising doubts about whether it can maintain its place in the business against the formidable threat from giants like Amazon and Walmart.

Krooger’s stock price rose at the beginning of the pandemic, but is ending the year only marginally higher than it started. (Chart from Google Finance)

Kroger was founded in 1883 by Barney Kroger, who invested all his money – $372 at the time – to build a grocery store. “Be particular. Never sell anything you would not want yourself,” was Kroger’s motto at the time.

Since then, the company has grown to 2,800 stores in 35 states, including through mergers with the likes of Fred-Meyer, Harris Teeter, and Roundy’s, which owns the Mariano’s chain. It’s the largest traditional grocery chain by sales. Its nearest competitor Albertson’s does about half the sales Kroger does.

The company says the Ocado partnership will be more multifaceted than just the large customer fulfillment centers they have announced so far. Most recently, Kroger announced that the company will begin working on driving up efficiency at Kroger’s in-store picking operations.

But Kroger has also been “cagey” about the details of the partnership, says Morningstar analyst Zain Akbari. “We really do see that as a potential game changer for Kroger as it attempts to really improve the economics of its e-commerce offering,” Akbari said.

“We think that the fulfillment centers that Ocado has built in Europe have delivered some really impressive results.” But without knowing exactly what the numbers are or how, specifically, sales will become smoother through the partnership, there’s no saying how profitable the operation will actually be. 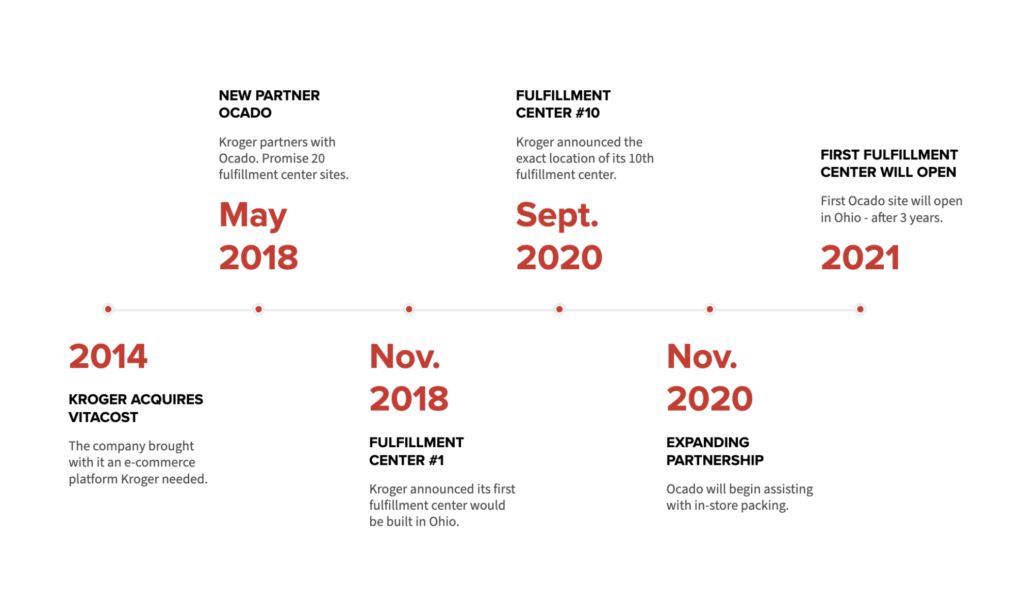 Kroger’s revenue has been flatlining since 2017, and the company hasn’t released estimates of how that could change under the Ocado partnership. The company is predicting same-store sales will be up 14% from last year in 2020.  Kroger’s stock has gone up by over 13% so far in 2020, and revenue for 2020 is so far over $72 billion. Kroger estimates it will achieve adjusted EPS growth of 45% to 50% for 2020.

Competition is fierce in the grocery space, where profit margins are slim and e-commerce giants like Amazon/Whole Foods, Walmart and others have the potential to eat into Kroger’s customer base due to their nationwide presence and rapid delivery. Kroger saw a 92% increase in online sales in the first quarter this year and a 127% increase in the second quarter, but even smaller competitors have seen major increases in digital sales since the start of the pandemic. Albertson’s has seen over a 200% growth in online sales in the first two quarters of the year.

‘Tis the season for fresh, family and fun! With Free Pickup, you’ll have everything you need to make the holidays a success. https://t.co/X0mLl6a5ab pic.twitter.com/TNhAufa4kU

Kroger is betting on the pandemic seriously shifting long-term habits for customers, according to McMullen. “We are… positioned to deliver 2020 and beyond for our customers, associates and shareholders, as we believe a number of impacts of COVID will be structural and lasting,” McMullen said during the company’s Q2 earnings release call in September.

Analysts agree with McMullen about some of the lasting effects of the pandemic on customer behavior. But if the online grocery experience is poor, it will alienate customers. McMullen will be counting his eggs before they’ve hatched, and the CFC model will be obsolete before many of the sites have broken ground.

Morgan Clark of Firestone, Colorado, does her regular shopping at King Sooper’s, a Kroger-owned grocery chain. In March and April, Clark put in her King Sooper’s orders online and would have them delivered to her house. She loved the convenience of it.

The only problem she had was the number of replacement items she ended up getting. “I would order what I normally would buy in the store and then i would end up getting a text message from the shoppers saying, ‘Oh, this item isn’t in stock; that item isn’t in stock. Can we substitute it for you?” Clark says that happened a lot, and the substitutes were things she wouldn’t have picked for herself. She stopped ordering online, and now shops in person again.

Experiences like Clark’s are common, as evidenced by the frequent customer complaints in Kroger’s Twitter feed. Grocery stores are designed so that shoppers have to walk through the whole store in order to find what they need, with some of the most commonly bought items, like milk and frozen items near the back.

That was meant to encourage shoppers to meander and pick up additional items that were not on their lists as they work their way towards necessities. That model doesn’t seem to be working well in the online age. “Online, you kind of need to flip the script, and make it as efficient and experienced as possible,” Akbari said.

Kroger hasn’t released the exact terms of the Ocado deal, although Kroger said it increased its stake in the British company by 5 percent. The company seems to think the investment is worth it.

Although it’s a big investment up front, “everybody is trying to figure out a way to enhance their distribution and supply chain infrastructure,” and it could be a big win for the company says Joe Feldman, Senior Managing Director and the Assistant Director of Research at the Telsey Group.

Amazon recently announced a plan to put 1,000 smaller warehouses in suburban areas around the country, which will undoubtedly create even more competition with Kroger’s upcoming fulfillment centers.

Analysts see the future of grocery shopping as a “blended channel,” meaning some shopping will be done online and some will return to in-store purchasing.

“Maybe they got used to cooking dinner for themselves,” Feldman says. “They realize it’s more healthy and costs less than just going out all the time. So there are some behavioral changes that will stick and give us some confidence.”