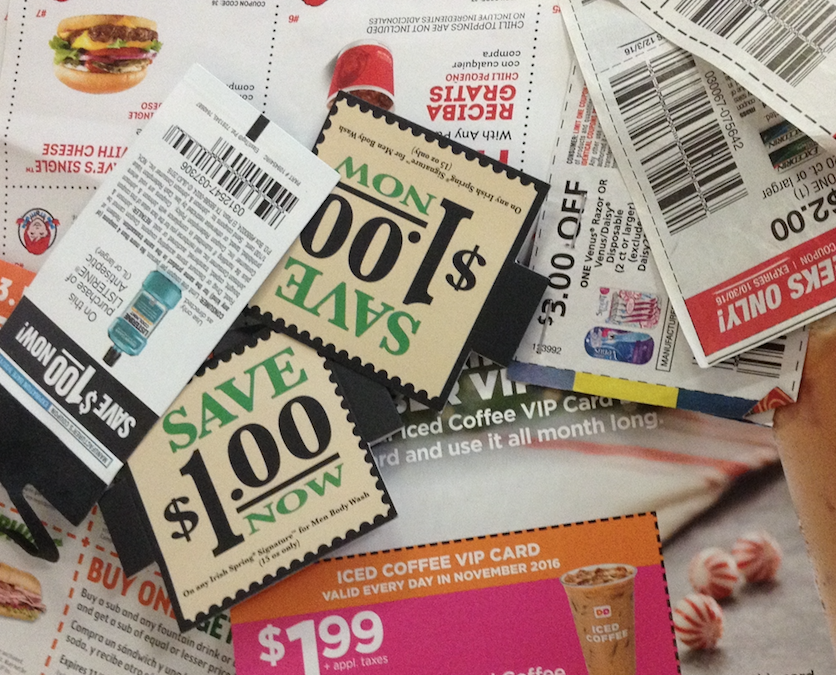 When was the last time you clipped a coupon? Although sitting and clipping coupons is not the fad that it once was in the 1940’s it is still a major practice for a consumer seeking great deals. With companies and rebate programs now just one download away, consumers are raking in deep discounts on groceries and everyday goods by combining old school coupons with new age applications.

The average American overspends by $140 dollars every day according to the Bureau of Labor Statistics’ annual Consumer Expenditure Survey. Many of these are full priced last minute purchases that were not discounted.  For many coupon experts, the solution here is budgeting, planning, and coupling.

“There are a ton of coupons, coupons are everywhere,” said Tina Su, creator of FreeStuffFinder.com.  Tina’s website has hundreds of thousands of hits a day and she has almost a half million Instagram followers who just like her rake in cheap of free deals for top retailers such as Target, CVS, Walgreens, Yankee Candle, Amazon and more. Every day followers to Tina’s accounts claim these cheap and free deals mainly by using coupons.

“As a kid, I didn’t have a lot of things. And so when I became a mother, I wanted to provide the world for my kids without breaking the bank, said Su in a blog post. “Living on a single income, I started with free sample hunting and was getting freebies in the mail every few days. Then I accidentally became an extreme couponer. I dove in head first and learned everything I needed to become a couponing pro.”

Even if you are not a couponing pro there are five simple steps you can take to start saving money.

Yep buy an actual foldable newspaper and give the digital a break for one day.

According to Su, the most successful coupons combine inserts from Sunday newspapers with e-mail or app based coupons. Su recommends purchasing at least 2-4 papers a weekend for the weekly Smart Source and Red Plum coupons.

Jasmine Quinones mother of two from New York considers herself an average couponer. She often buys a newspaper on Sunday only buying multiple papers when she feels it is worth it. “Twice a month there are double the coupons in a paper so I will buy two then,” said Quinones. “Then Proctor and Gamble has a special insert and when that comes out once a month and I get 4 papers that Sunday.”

Toni Parrish of the popular YouTube channel “Couponing with Toni” understands that depending on where you are buying tons of newspapers may not be ideal. “To avoid a waste of paper sign up for a couponing service. You can just pay for the inserts you want. In fact, sometimes you can purchase coupons from regions all over really saving you more money than other locals.

70 percent of coupon based e-mail campaigns have higher open and click rates than other mailings sent by the same brands, according to Experian . The data also reveals that e-mail coupons available for online redemption provide a 34 percent average increase in open rates stores that require in-store redemption have an open rate of 51 percent.

Parrish encourages you to set up an e-mail just for couponing. “Just enter the e-mail on your favorite store’s website and they will start to send you coupons, said Parrish. “Sometimes high value 25 percent or 30 percent off coupons from retailers like CVS and Target when paired with Cash Register Tape or coupons printed on register paper.”

While shoppers like Quinnones, are not a fan of the e-mail systems in fear of being over spammed she has opted for text programs from fast food restaurants and department stores and think they are a solution to the e-mail shy.

According to the experts, If you were also not sold on purchasing coupons, all is not lost. All you will need is log on to coupons.com and print manufacturers coupons that suit your needs.

During the early 2000s, many grocery stores rolled out loyalty card programs with retail stores soon joining the bandwagon. The cards offered direct discounts without the need of clipping coupons. However, mergers of companies such as Duane Reade and Walgreens led to a new group of blended customers and made using loyalty programs a very expensive and uncertain overhaul.

At this time the number smart phone users  began to rise from a mere 10 million users in 2007 to now over 267 million users in 2016, according to Statista. Companies now had the challenge of increasing foot traffic,  meeting the consumers wants of having coupons and simultaneously accessing the power of the everyday consumer’s smartphone.

What consumers saw was the push of companies such as Walgreens and Duane Reade having a unified loyalty card an app and companies such as American Express convincing retailers such as Macys, Exxon Mobile, Hulu, Rite Aid, Nationwide Insurance, Expedia and more to combine influence under the plenty app and reward program in hopes of increasing consumer traffic online and in store inevitably increasing their profits. Companies not only learned data about the types of consumers that

“Loyalty programs tell the stores what you like and often stores will give your personalized CRTs to keep loyal,” said Parrish. “When stores know your shopping habits, you are able to find coupons that fit the needs of your family, saving you more in your budget.”

4. Find the App for That

“Cashback apps are very valuable. They are the easiest way for someone new to couponing to start saving,” said Su. “All you need is a smartphone.”

Ibotta, founded in 2012  links all your loyalty cards to your Ibotta application and provides instant rebates for specific items you may or may not always purchase.

So who are these apps really for? Most couponers already use these apps. For bargain hunters, like technology manager Martise Carruth 26, who does not see why he should clip coupons in 2016 rebate apps are perfect. “If I can scan a barcode or just scan my phone and get all the benefits of a clipped coupon that works best for my style. If I can save little by little in the end it all adds up.”

Boy does it add up. Since it’s inception 4 years ago, Ibotta has already returned almost $133 million dollars back to its users.

5. Find What Your Coupon Recipe

For those who know the art of savings coupons, loyalty card, and rebate apps are part of a recipe. “Strategically stacking % off offers, with store sales, manufacturer’s coupons and coupons, you can get some incredible deals at the lowest prices you’ll see anywhere, said Su. “Sometimes up to 80% or even 100% off.”

As a result, avid couponers who find a coupon friendly store, Target for Su and CVS for Parrish, not only remain loyal but spread the word on their platforms for those looking to save money. Yet, there are so many more Americans in need.

With Americans having increased their spending by 30% in the last 25 years and spending $1.33 for ever $1 they earn it is safe to say that couponing  trend can still bare to earn some new followers.

“Opportunities to save are all around us. If you can pay half price for something than you normally would, it would be like throwing money away if you didn’t take advantage of it, said Su.”

The practice of couponing is not as arduous as it once was and saving money is just an app away.