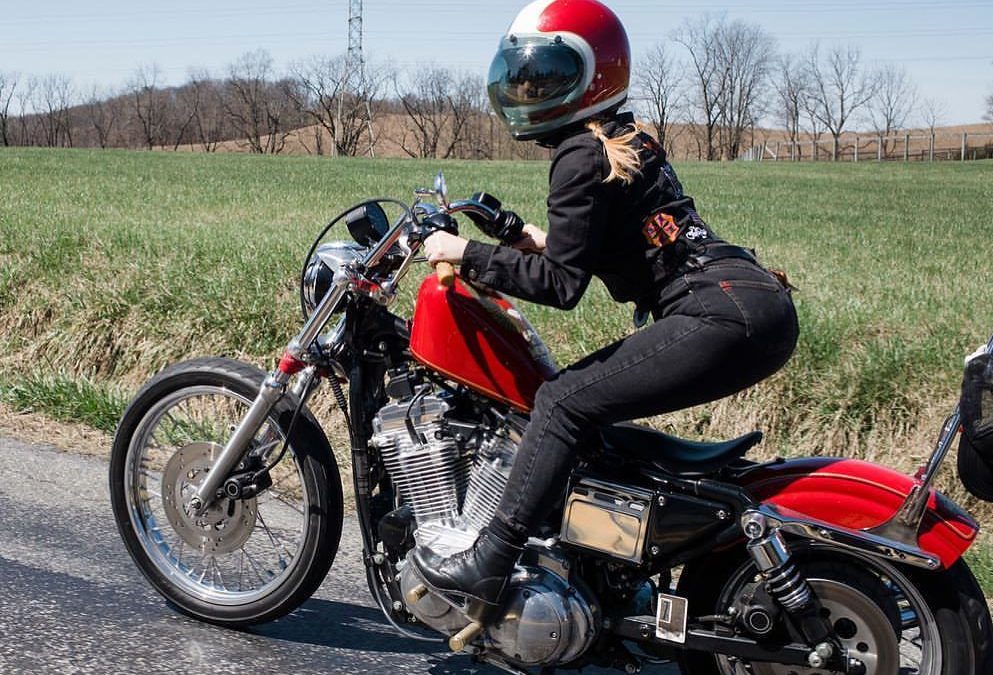 Harley Davidson built its image on attracting one demographic: white male baby boomers, the tough guys on big loud bikes. As those customers die or age out of riding, America’s largest motorcycle manufacturer is struggling to attract new customers, a crucial factor in turning around its three-year decline in sales of over 12%

The largest growing demographic of new motorcycle enthusiasts is women, one in five riders, double from a decade ago. Despite the growing number of female bikers, less than 10% of them rode off on a new Harleys last year.  It’s not from lack of trying. Harley’s ten-year campaign of events, marketing and advertising aimed to get women in the saddle has brought some through the doors, but not added up to significant bike sales.  Its virile image persists in its advertising, gear selection, bike design, and threatens to alienate women from straddling the most iconic motorcycles. If the company fails to expand its customer base by enticing more female riders, it could face an existential threat.

“For Harley to survive, they have to attract new people to their bikes,” said Brian Yarbrough, analyst for Edward Jones. “There’s no other way to reach their goal of 4 million riders.” 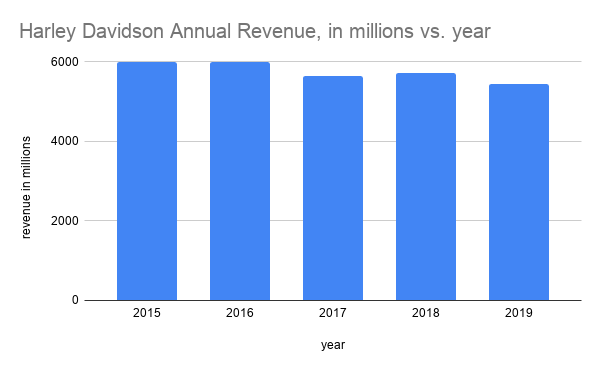 Despite motorcycle registrations growing every year for the past decade in the U.S., an increase of 75%, Harley has had to cut motorcycle production by as much as 5% per year for the last three years. Its market share has decreased by over 8% in the last five years to just under half the market. Last year, its share prices hit a five-year low closing at $30.39.

Harley Davidson share prices have been in a downward spiral.

Maria Mogaverse, 45, a theatre artist from Oregon, said she got a Triumph because of the design. Mogaverse pointed out that the handlebars, riding position, heavy weight and stiff clutch make it awkward and difficult for her to ride a Harley.

“They need to make a bike that I don’t have to pay all this money for aftermarket adjustments just so I can ride it,” said Mogaverse. “And I want to be able to sit on a Harley without hunching over with my crotch on the tank.”

Ducati, also popular among female bikers, has grown for the last eight years. Admittedly, Harley is bigger than its competitors. It sold 228,051 bikes last year compared to the 64,752 bikes sold by Triumph and the 53,004 bikes sold by Ducati. Harley’s 2018 revenue is nearly tenfold of Triumph’s.

Ashley “Larry” Zeolla, a former motorcycle mechanic for Triumph, said the few smaller bikes sold by Harley do not have enough power and torque. Triumphs with the same power as the average Harley are half the weight, and more compact in design, making them easier to park, ride and pick up if the bike is dropped.

Women also expressed dissatisfaction with Harley’s riding gear. Amira Steffany, 46, a Harley salesperson in Texas, tried to purchase a rain suit for riding. She had a choice of only two colors, white and pink. Then, she observed that men had five options, including two that had hi-res which allow a rider to be more readily seen in difficult conditions. She also noticed all the women’s boots had heels.

By contrast, Triumph and Ducati carry just as much gear for women as for men, and it’s not pink or purple. It looks exactly like the men’s gear, but cut to fit women.

Many female riders had a lot to say about Harley’s image including its ad campaigns and the way women are portrayed with motorcycles. Lucy Perritt, 29, an artist in Lancaster, Pennsylvania, was hired by Harley in 2017 to do marketing and events to attract women and younger people to the brand. With too few women in its ranks, she found Harley’s attempts to be ineffectual.

“Women are one of their target markets,” said Perritt. “But I don’t think what Harley is doing is working at all actually. They can’t just put women in their visual and think that’s all. Then they’re just trying to cash in.”

Traditionally women literally took the back seat in Harley’s visuals. Women were often depicted without proper riding gear and on the back of the bike. The most popular dealer sponsored event is the annual bike wash which features bikini models washing motorcycles.

Ducati ads focus on the bike or show depictions of it as a race bike. Riders depicted in Ducati ads are portrayed with full-face helmets and full gear which obscures the gender. Women wear full proper riding gear even when they are on the back in Triumph ads.

Harley’s marketing and advertising mostly features men. And while they do have women-only events like its “garage parties,” where women learn more about riding, these events are annual and are not offered by most dealerships. The Riding Academy, available at less than half of the dealerships, was conceived to lure women to their bikes by offering lessons and licensing, but only attracts about 10,000 women every year, 20% of its students despite offering women only classes.

As for its top decision makers, the photo that appears over its company leadership web page depicts a woman on the back of a Harley clutching the man at the helm. There are two women on their board of 10. Women hold two of the six executive positions, one is chief human resources officer. Women are more than half the chief human resources officers in the top 1,000 companies in the U.S.

It’s evident that women are its target market, says Nashville Harley saleswoman, rider and country singer Vivian Nicastro, 27, but admits that she can’t figure out the “magic formula for Harley to attract more women.”

“It’s a question I’ve asked myself many times,” said Nicastro. “All I can say is that women – specifically millenial women – value authenticity and experience.”