For Single Moms with Jobs, Retirement Planning Doesn’t Need to Be a Luxury

Alesia Williams was 41 when she became a single mother in 2006. Now a speech pathologist, she has come a long way since losing her job and home, raising her infant children in a shelter and relying on food stamps to remain independent.

But when Covid-19 struck, the challenges resurfaced for Williams, now 55, who works for a school district in Killeen, Texas. As a contract worker,  she has no income in the summers, when schools close, especially this year, when lockdown restrictions prevented her from offering private speech therapy in clients’ homes. “We are trying to play catchup on the rent because it’s all behind as well,” said Williams, now 55, who has over $100,000 in student debt related to her master’s degree and doctorate, along with medical debt and personal loans that helped her get by as income slowed.

Although she is just ten years away from the average retirement age, retirement planning is the last thing on her mind. “I don’t worry because I know that won’t change anything,” she said.

Financial planning can be overwhelming for anyone, but even more so for single moms who are the sole caretakers of their children. They juggle multiple responsibilities and often receive little or no child support. 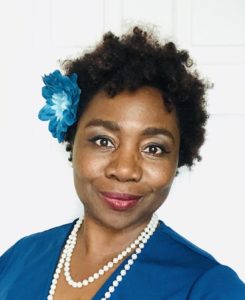 Samantha Gregory says single moms who are struggling with low income can start their retirement accounts by putting in $10-30 a month.

Samantha Gregory, an Atlanta-based blogger on financial and personal development content for single moms pointed out that those struggling with low income should focus on investing in themselves first.

“I think the focus should be on increasing their skills to get a different job that pays more,” said Gregory. “And that gives them a sense of financial cushion security, to be able to even begin to think about retirement.”

“Start putting money in, $10 a month you know, $30 a month,” Gregory said.  “Incrementally, build it up as your income increases, that’s the best way.”

Motivation to Save for Retirement: Single Moms vs. Married Moms

“If you think it’s hard to make ends meet now, imagine trying to do that when you are 75,” Cagan said. “As hard as things may be now, you do have options that you will not have when you are older.”

One of the biggest challenges for working single moms with reduced or delayed income during the pandemic has been saving for retirement said Marguerita Cheng, a certified financial planner who heads Blue Ocean Global Wealth, a financial advising firm, and serves as an ambassador for the CFP Board  which oversees standards for financial planners.

But “when we talk about those essential expenses, there’s a lot of opportunity to free up cash flow,” said Cheng. “Maybe by having them refinance their mortgage and lower their fixed expenses so that they can save more for building emergency funds for investing for their long-term goals.”

While saving for retirement is a priority, Cagan said, it is important to plan for day-to-day expenses first, given the uncertainty about jobs.

“You need to have your survival and essential expenses covered right now,” she said. “Once those are covered, if you choose to put some money away for retirement, that’s OK.”

In addition to job uncertainty, single moms may also be solely responsible for essential expenses and childcare costs, from buying food to school supplies to medicines. According to a 2018 study by the Pew Research Center, in single-parent households, children were more likely to live with their moms than their dads.

The burden of meeting their children’s expenses, particularly college, limited single mothers’ ability to plan and provide for their own retirement.

“What single moms do is, they prioritize their children’s education over their retirement,” Cagan said. “And that’s a huge mistake because you can borrow for education, but you can’t borrow for retirement.”

She pointed out that children could apply for scholarships and student loans or choose community college over an expensive four-year college to reduce their financial burden.

When it comes to retirement plans there are many to choose from. The traditional 401 (k), the most popular plan, is offered by companies and allows employees to save a portion of their income for retirement and employers to match contributions.  The 401 (k) Roth is a variation of the traditional 401 (k) in which contributions are taxed immediately and are spared from taxes upon withdrawal.  There’s also the 403 (b) plan associated with non-profit institutions like schools or religious organizations.

Single moms who don’t have employer-sponsored retirement accounts like 401(k)s may want to consider individual plans like Individual Retirement Plan, or IRAs,   offered by brokerage firms and banks.  Like the traditional 401 (k), the traditional IRA is exempt from taxes during contribution and taxed on withdrawal. The Roth IRA works the opposite way: it is taxed during contribution. For the self-employed, there are other accounts such as the SEP (Simplified Employee Pension) IRA and the solo 401 (k).

The Internal Revenue Service sets rules  on every account about the maximum annual contribution, the age when money may be withdrawn without penalty, and the amount of penalty on early withdrawals. 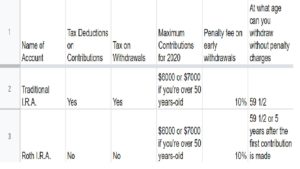 When it comes to choosing the right plan for single moms who don’t have a company sponsored retirement plan, Cagan advised paying attention to the tax rate.

“If you expect your tax rate to be lower when you retire, a traditional IRA makes a better choice,” Cagan wrote in her blog in 2017. “But if you think your tax rate will be the same or higher than it is now, a Roth IRA is the hands-down winner.”