For Intel, manufacturing is a losing battle. To win, it will need to outsource. 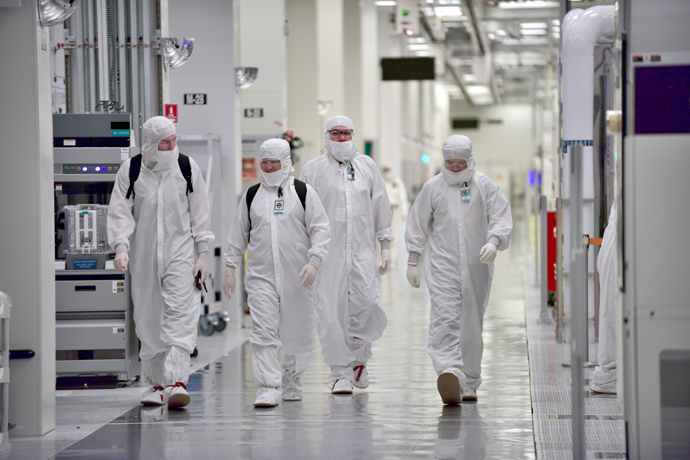 The top semiconductor manufacturers are locked into an endless race to engineer smaller, more powerful and more energy efficient processors. It’s what guarantees that when you buy a new laptop it will be thinner, lighter and have longer battery life, while still delivering more computing power.

Almost every computer used to have an Intel chip inside. But the company’s persistent manufacturing issues have allowed its rivals to leap ahead, especially Advanced Micro Devices (AMD). Now two years behind its competition, according to management’s estimates, Intel has lost its high ground in the industry.

Intel has no time to waste, it needs to outsource its manufacturing to the experts. Otherwise, it won’t catch up.

Intel is the last semiconductor company to go it alone, keeping everything in-house, from design to fabrication. It’s been the company’s defining advantage, when marshalled capably, enabling it to produce the best chips in the industry without paying for outside expertise. And, historically, the company hasn’t needed outside help – it already employed the best engineers and operated the most advanced factories.

But over the past two years the company has proven itself incapable of keeping pace with its nimbler competition’s manufacturing technology.

In the race to pack more transistors into a smaller piece of silicon, fabrication-only firms like Taiwan Semiconductor Manufacturing Co. (TSMC) and Samsung have mastered new manufacturing processes and jumped two generations beyond what Intel’s plants are capable of producing.

For over two years TSMC and Samsung have been producing chips with seven nanometer technology, building transistors 1.4 million times smaller than a centimeter. AMD has already produced and shipped its own seven nanometer chips manufactured by TSMC.

Intel, meanwhile, says it isn’t likely to begin producing its own seven nanometer processors until at least 2022.

By outsourcing their manufacturing to TSMC and Samsung, AMD and fellow upstart Nvidia can devote their resources to designing chips using the latest technology.

Getting a new semiconductor factory up and running requires billions of dollars in capital. The facilities, called “fabs,” need specialized equipment and highly skilled workers. Manufacturing semiconductors, to put it mildly, is expensive.

A longtime also-ran to Intel, AMD reversed its fortunes only after shedding its own manufacturing arm in 2006. Spinning-off the manufacturing business, now known as GlobalFoundries, freed up cash and allowed AMD to devote its resources to designing the best chips possible.

According to AMD lore, W.J. Sanders III, the company’s co-founder and longtime chief executive, once said that “real men have fabs.”

Dirk Meyer, the CEO who led the 2006 divestiture, told the New York Times’ Ashlee Vance at the time that “we feel like we’re still pretty manly at AMD.”

Under the leadership of Lisa Su, the company’s first female chief executive, AMD has finally become a formidable threat to Intel – no fabs required.

Intel is still evaluating whether to maintain its manufacturing status quo or to work with outside foundries, said Bob Swan, the company’s chief executive, in an interview last week with CNBC.

Swan and Intel shouldn’t be blinded by the same misguided machismo that afflicted AMD’s Sanders. Intel’s products, and their bottom-line, will be better off for it.