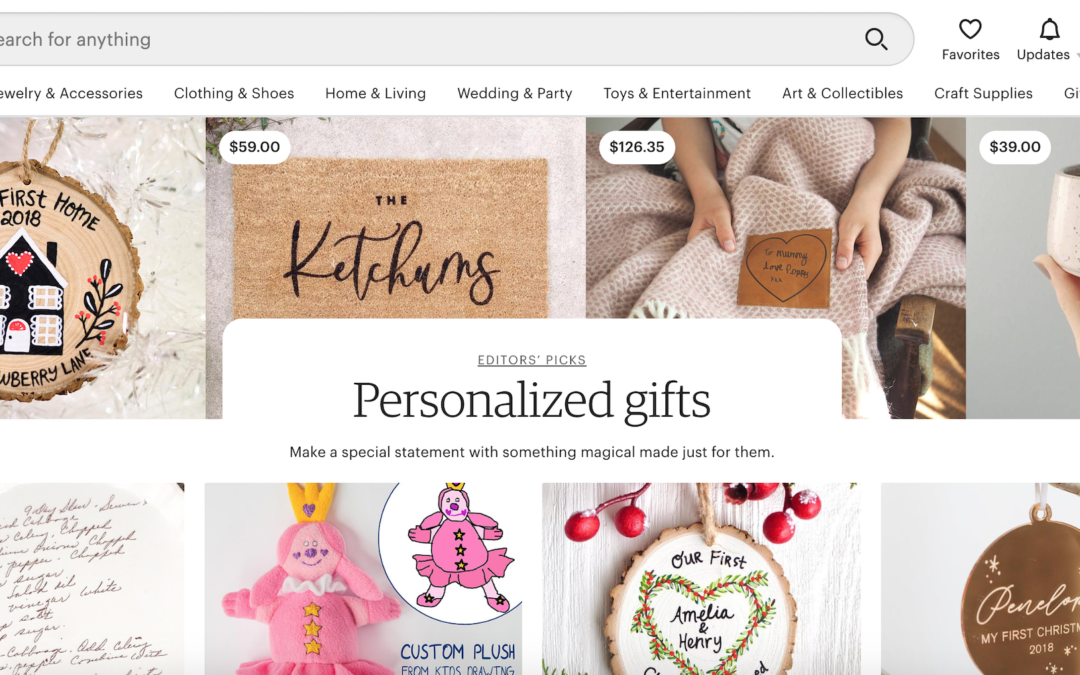 When the Centers for Disease Control & Prevention announced in April that Americans should wear masks to stop the spread of Covid-19, millions scrambled to find face coverings. Etsy sellers saw the demand, and started sewing. That quick thinking led to over $600 million in mask sales and sent the stock soaring.

Etsy has profited from the boom in e-commerce brought on by the coronavirus. But mask sales are slowing, and hopes of a vaccine are increasing. Etsy is looking to play up its strengths so that new customers will keep coming back and plans to put its emphasis on the ability to personalize products.

“This is an on ramp for people who hadn’t considered us before,” Etsy CFO Rachel Glaser said in an interview. She noted that 83% of new buyers who purchased a mask returned again to make a non-mask purchase. (Etsy declined to comment for this story.)

For now, Etsy has seen customers return for home goods and jewelry. But it’s starting to bump up against big competitors in several industries that dwarf it in size, including Target, Wayfair, and Gap. 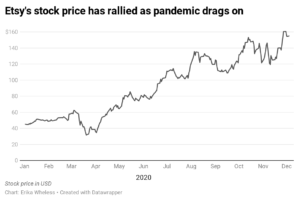 Brooklyn-based Etsy was founded in 2005 as a site for makers and crafters looking to sell their handmade items. After going public in 2015, the company has grown steadily under the direction of Josh Silverman, a former Etsy board member who was installed as CEO in May 2017. The eBay and Skype veteran made some swift changes, including layoffs and cutting projects that wouldn’t do much for the bottom line. Rather than change the company’s corporate structure, Silverman let its B Corp status lapse, a certification symbolizing high social and environmental standards. Employees were stunned by the culture change and layoffs.

But the tough love worked. The company’s stock saw a 50% uptick after six months under Silverman’s leadership. Its number of active buyers more than doubled from 31.6 million in late 2017, to over 69.6 million today. Analysts estimate that Etsy will close the year with $1.6 billion in revenue, a 95% change from 2019, and $346 million in profits, a 300% increase.

Sales are expected to continue to grow next year to an estimated $1.8 billion for 2021, but profits are going to decline to $329 million because of a drop off in mask sales.

This year, masks accounted for 11% of Etsy’s $2.6 billion in sales on the site for the third quarter. Etsy reported strong sales in its other top three categories, boosted by Americans sprucing up their homes with prints, mugs, plants, and lamps. Homewares and home furnishings posted $772 million in sales for the third quarter, up 4.3% from last quarter and up 126% from last year. Jewelry and accessories, and craft supplies are the next two. If masks were their own category, they would be the fourth largest. 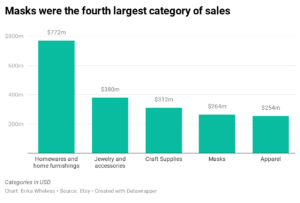 “The biggest strength for Etsy is the significant amount of new buyers that it saw come to the platform this year,” says Ygal Arounian, a research analyst at Wedbush Securities. “The opportunity is for Etsy to keep a portion of those buyers coming back to the platform next year to buy categories that Etsy typically excels in.”

Buyers are already doing just that. Return visits have boosted Etsy’s profits, with 2020 already more than double 2019 profits. Sales from other categories have also seen growth. General sales were up 93% year-over-year for the second quarter of 2020, and up 92% for the third quarter. 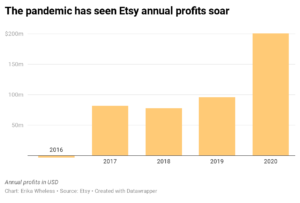 Samantha Ruotolo, 28, turned to Etsy last Christmas when searching for a personalized necklace for her mom. She found herself back on the site earlier this year after a friend told her about a pair of linen face masks. “They were great in the summer, and didn’t give me acne,” Ruotolo says. She recently bought a t-shirt and a beanie that says “NYC is dead.”

Etsy has an uphill climb as it competes with retailers in several industries. Carpenters selling custom desks are up against the likes of Ikea and Wayfair; jewelry and accessory makers have to stand out from Target. Etsy’s 2019 revenue was $818 million, compared to Target’s $78 billion, Wayfair’s $9 billion, and Gap Inc.’s $16 billion. While they had a first-mover advantage, Etsy mask-makers are starting to lose some sales to big box stores. Gap, Inc. reported $130 million in mask sales in the second quarter. Under Armour’s $30 face mask, specifically designed for working out, sold out in under an hour and continues to be a hot commodity. 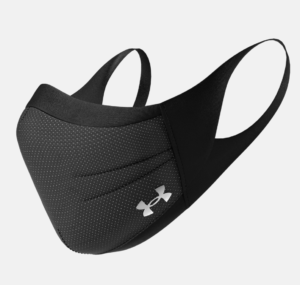 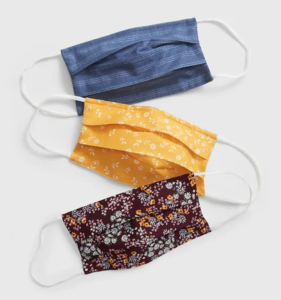 A three-pack of masks from Gap

But the pandemic has highlighted Etsy’s strengths over its competitors. At a logistics level, Etsy has fewer supply chain hiccups. Sellers can ship items from their homes or the post office, instead of relying on central warehouses for distribution, like Amazon. The pandemic has also underscored the struggle of small businesses to stay afloat. More conscious consumers like that Etsy allows them to directly support small businesses, and the idea of buying fewer, yet better, more personalized items.

“Large [online retailers] like Amazon are great to buy things that are very cheap and arrive very fast, and you use them and you’ve forgotten about them two seconds later and then they’re in a landfill,” Etsy CEO Josh Silverman said in an interview last month with CNBC. “I think there’s always a need for things that are going to be cheap and arrive fast, but more and more I think people want an alternative to that.” 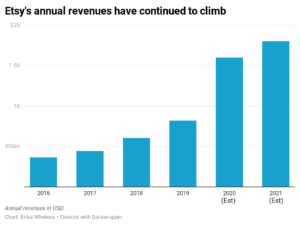 Etsy’s biggest strength is sellers’ ability to customize products – from toys, to jewelry, mugs, shirts and bags. According to Silverman, “personalized gift” has been the most-searched term on the website this year. This is a huge draw for consumers looking for more thoughtful gifts, since gifts like cooking classes or spa days won’t be popular for the foreseeable future.

“We saw a big uptick in experiential gift giving over the last several years and because of the pandemic I don’t think we will see that, as people aren’t traveling as much,” says Bill Thorne, VP of communications for the National Retail Federation.

Etsy has also rolled out personalized searches with the goal of helping customers quickly find what they are looking for. Now, when two buyers search for the same word, they will get different results based on their previous purchases and saved items. It also pushed for sellers to offer free shipping on orders over $35, and recently partnered with Klarna to offer payments in installments on more expensive products. 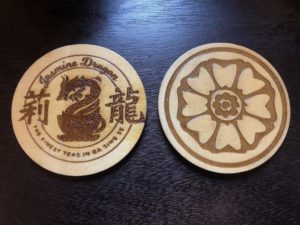 Etsy predicts its mask sales will drop off, but customers that did not come to the site for a mask have stuck around for the niche products. Alex Mise, 31, turned to Etsy when he started working from home to add more personal touches to his room. He bought two carved coasters for his desk and a new print for his wall. A few months later, he went looking for a specific size of pot for a new cactus, and ended up messaging Carl Mankert, a potter, for a custom planter. Mankert responded with a rough drawing, a price estimate, and a timeline for when the planter would be done. The planter arrived ahead of schedule, and just as described.

“That’s just something I would never be able to get from Amazon,” Mise said.