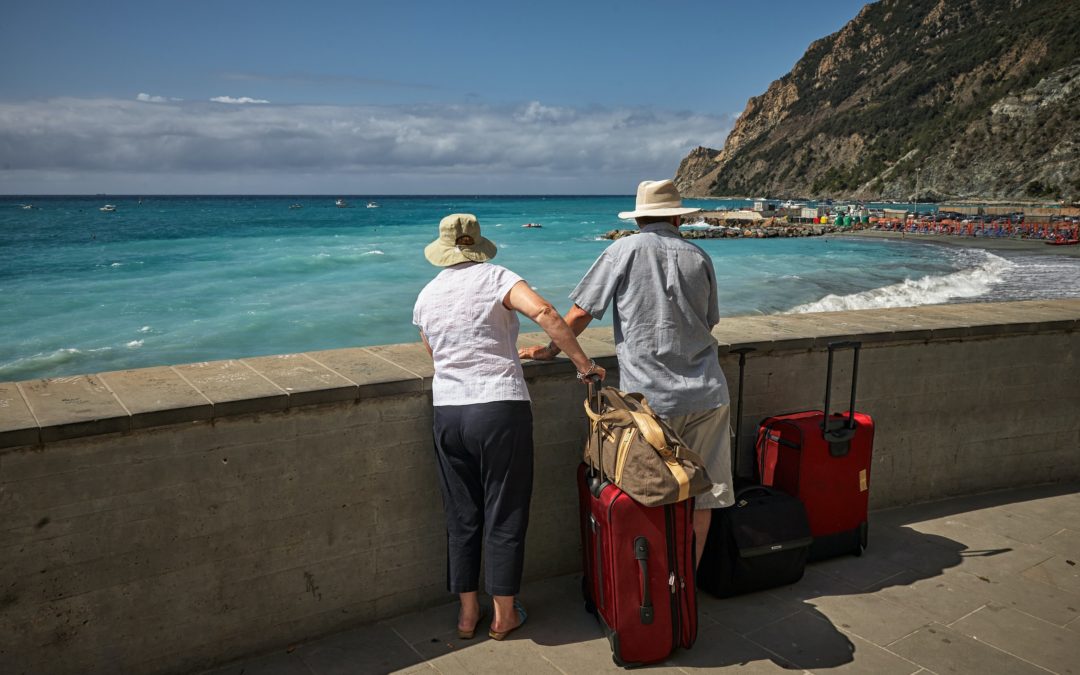 Royal Caribbean says it’s ready for a comeback in 2021. Its most vulnerable customers aren’t so sure.

After experiencing the worst year in its history, Royal Caribbean Group not only has the daunting task of resuming operations in a world severely altered by the COVID-19 pandemic, but convincing a frightened consumer it is up to the challenge.

“These days, I wouldn’t be comfortable (going on a cruise)” said Stacy Dileto, a 68-year old cruise fan from New York City.

“It’s the close quarters on a cruise ship, I mean if the virus can spread so rapidly, and a person or two gets sick..” she continued before trailing off.

Dileto is one of many senior cruise goers questioning when they would feel comfortable setting sail again. Seniors, a group most vulnerable to COVID-19, make up a sizable portion of cruise passengers, Royal Caribbean included. Convincing them that cruising will not endanger their health is pivotal to a Royal Caribbean resurgence in 2021.

Early consumer analysis indicates it has a long way to go.

According to Rollo’s travel agent sources, cruise bookings fell between 80-90% in October.

As of 2017, 46.7 was the average age of those booking cruises, according to a study done by the Cruise Line Association of America. Patrons over 60 make up nearly a third of all passengers at 32%. 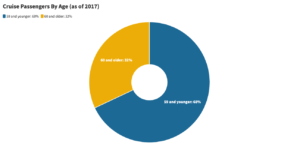 The average age of a Royal Caribbean cruiser is slightly older at 48.8, and these customers led the company to a record $10.95 billion in revenue in 2019 before the pandemic shattered its fortunes. 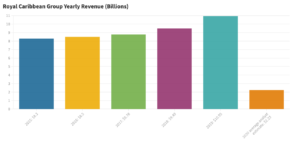 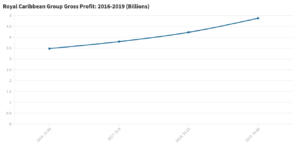 2020 has been so bad for Royal Caribbean, that its refunds actually exceeded sales during the third quarter, leading to negative revenues of $33.7 million.

Yet, Royal Caribbean’s stock has skyrocketed ever since its nadir at the onset of the lockdowns in March. The share price has more than tripled between March 18th and December 4th, making up much of 2020’s massive decline. 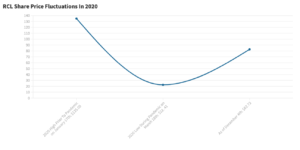 Still, the stock’s rise could be misleading about Royal Caribbean’s immediate future. The S&P 500 has risen sharply over the same span, indicating Royal Caribbean is riding the tailwind of a larger bull market. And the average analyst revenue estimate for 2021 is $4.32 billion, less than half of 2019’s mark.

While the news on COVID-19 treatments has been good so far, it remains to be seen how effective these treatments will be in the long term and how soon they will make customers most fearful of COVID-19 willing to cruise again.

Chole Urban, 80, is a frequent cruiser who is especially worried about a ship’s ability to deal with a COVID-19 outbreak. She needs to see Royal Caribbean meet certain benchmarks before she would even consider coming aboard again.

“They would have to have several cruises with NO outbreaks on board or at any of the ports of call,” Urban said.

While Royal Caribbean and its competitors have agreed to a bevy of health and safety guidelines, the company has a troubling history of viral outbreaks. In 2006 both its Mariner of the Seas and Explorer of the Seas cruises reported hundreds of cases of the Norovirus, a highly contagious gastrointestinal bug.

A scared customer base is one reason Rollo is continuing to classify Royal Caribbean’s stock as well as its chief competitors’ as poor investments. The CDC’s recent decision to rescind its No-Sail Order has done little to change her analysis.

“The CDC’s ‘Conditional Sail Order’ is arguably a pyrrhic victory,” Rollo said in her report.

Rollo cited an extensive anonymous travel agent survey to back up her pessimistic outlook. While some agents believe there is broad pent up demand for cruising ready to be unleashed, most remain skeptical.

“A majority of those wanting to take cruises will not do so until there is a proven, safe vaccine; Covid cases are at or near zero for at least two weeks, and we have seen the end of the second cycle of the illness,” asserts one travel agent in the survey.

Until Royal Caribbean can demonstrate to customers like Chloe Urban that its cruises are safe, its prospects for 2021 are murky.

“I wouldn’t go until we are told the virus is under control in this country and wherever in the world we would be visiting,” said Urban.