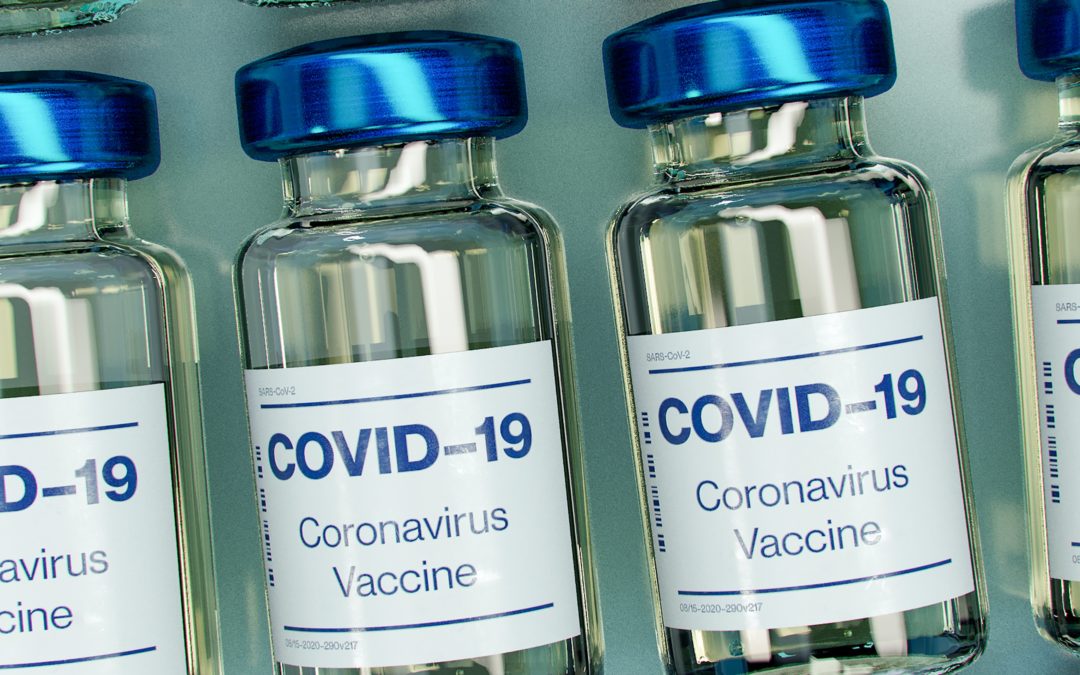 This time last year, Moderna, Inc., was starting to look a lot like Theranos.

Moderna had spent the large part of a decade selling investors on the idea of an unprecedented product—a messenger RNA drug. The company, valued at $7.5 billion, made history in December 2018 with the biggest-ever initial public offering for a biotech, but immediately saw shares slump as investors grew skeptical of the company’s investment splurges, mounting losses and absent results.

Then came the coronavirus.

In the 11 months since Moderna sequenced a Covid-19 vaccine, the company has nearly made good on its promise to design an mRNA medicine worthy of Food and Drug Administration (FDA) approval. Authorization is expected Friday. Shares soared when the company applied for emergency approval of its mRNA-1273 vaccine, and profits, lined with taxpayer dollars, are soon to follow.

Moderna will capitalize on the U.S. government’s desperation for a return to normalcy, pumping up its vaccine price to meet demand, bringing in billions and ignoring the ethics of profiteering off a public health crisis turned economic catastrophe.

“They could have priced the vaccine at half of what it’s priced at now, and they would have still been profitable,” Hartaj Singh, an analyst at Oppenheimer & Co. said. 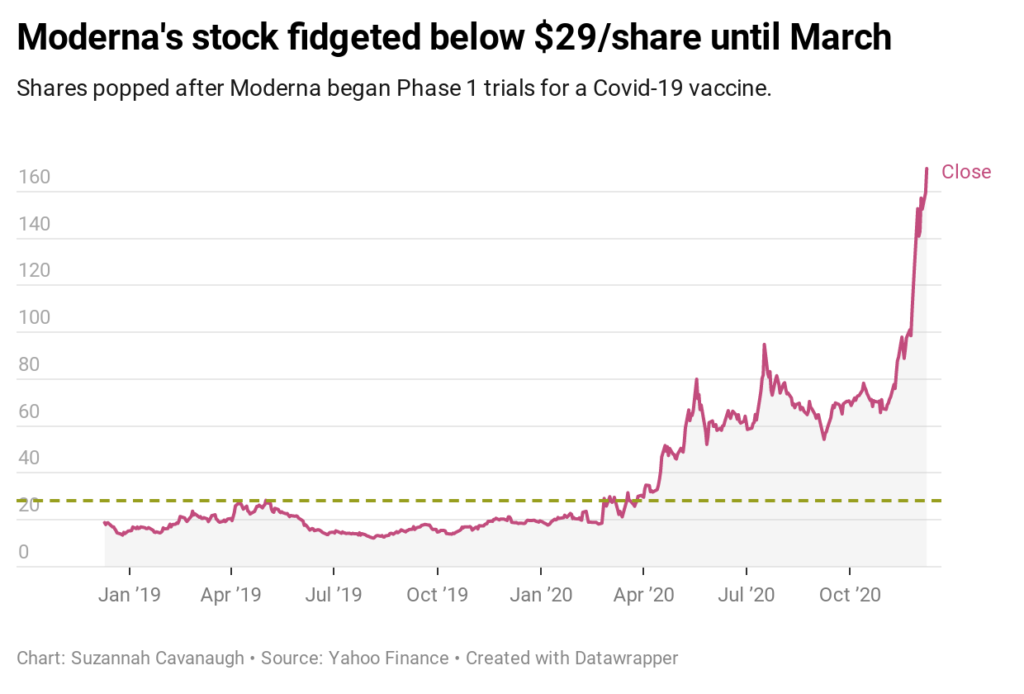 Moderna’s price, far from a value-judgment, is their escape hatch from a decade of losses.

Lack of sales—due to a lack of products to sell—are to blame. Before Covid-19, Moderna’s revenue stemmed primarily from grants to fund research; the company had never produced a marketable product.

The company’s high operational expenses mean Moderna is likely to report record losses in 2020. On average, analysts estimate Moderna’s annual losses of $688.5 million, up from $514 million in the red in 2019. 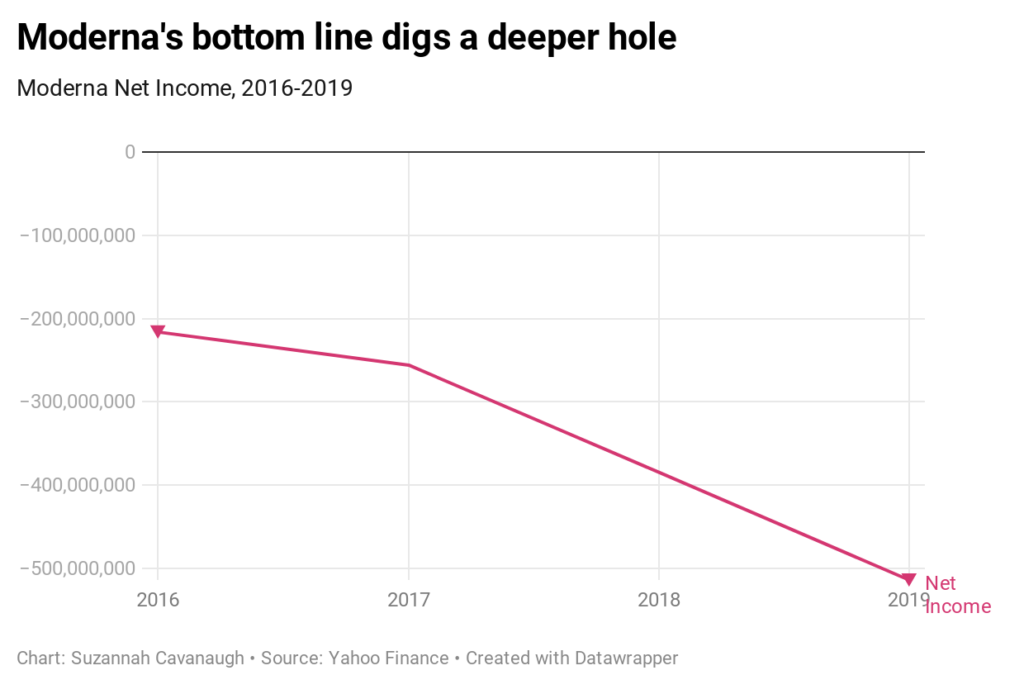 A successful vaccine would beget sustained revenue. Moderna has already inked deals to distribute 381.5 million doses to seven governments in 2020, with options to tack on more shots.

This year alone, the U.S. government sank just shy of $2.5 billion into research and development for Moderna’s vaccine.

Analysts estimate Moderna will pull $446 million in revenue this year, a figure that balloons to $7 billion come 2021.

“They will have, what’s called, pandemic kind of revenues,” Singh said. 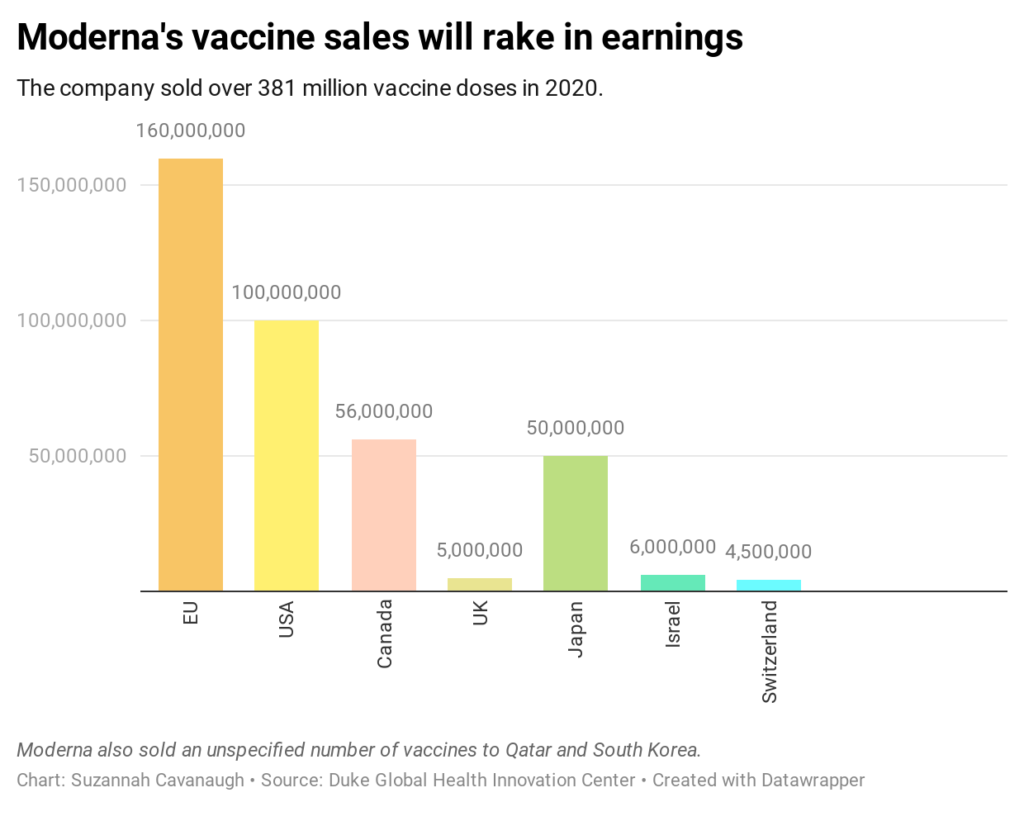 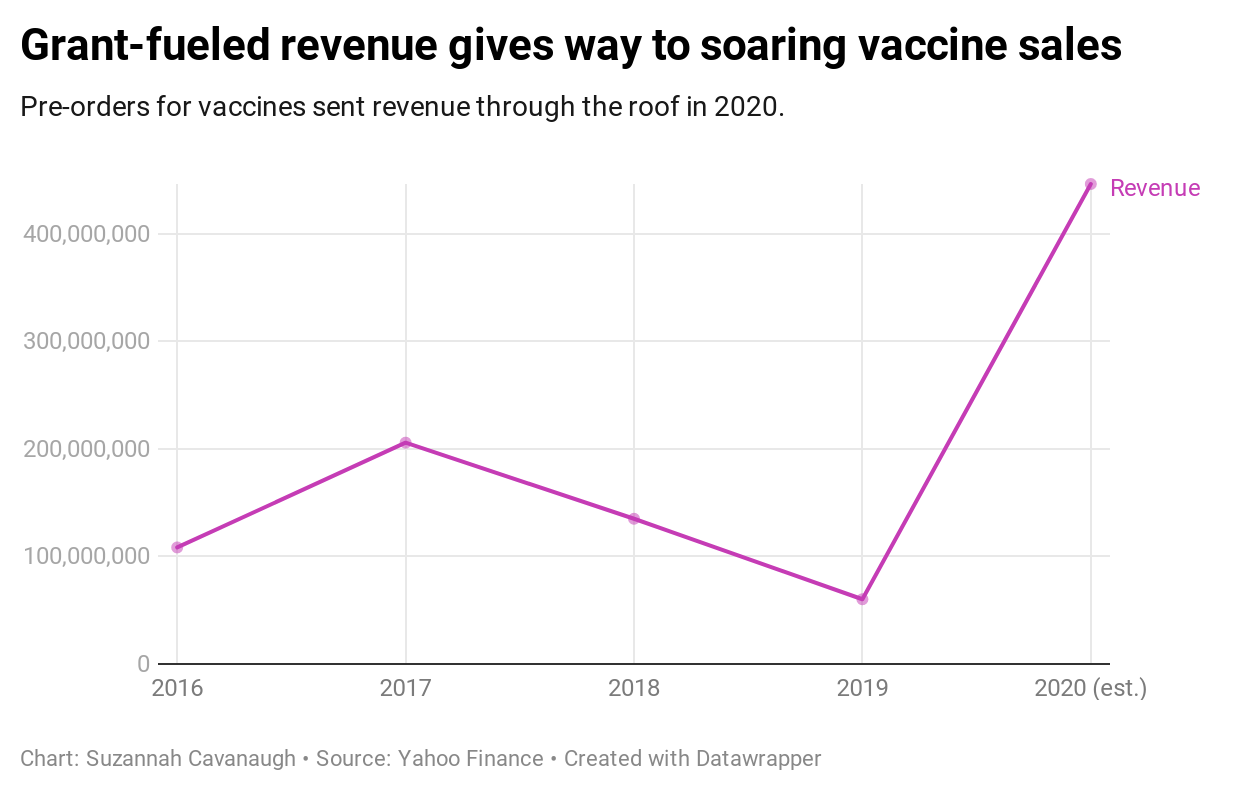 If projections are correct, profits will take off too.

When Moderna secured its first U.S. deal for 100 million doses at $1.5 billion, the company provided a baseline for cost—$30.50 per person for a two-dose regimen.

Earlier projections valued mRNA-1273 between $32 to $37 a dose, or $64 to $74 for a full round, but Moderna’s pre-sale price still billed the vaccine above competitors. Pfizer, producing another mRNA drug, had promised a $20 vaccine sequence; AstraZeneca said it would sell doses for a few bucks a shot. Others vowed to forgo profits entirely.

In an earnings call, Moderna CEO Stéphane Bancel revealed that the starting price had a coupon baked in. Once trial results were conclusive, governments would be expected to pay a yet-to-be-determined full price.

“As the product’s risk decreases with data we give less of a discount,” Moderna CEO Bancel said.

The final cost of a vaccine is hard to pin down because it rests on myriad variables, like real-world efficacy, accessibility, ease of use, and whether competitors produce comparable or superior results, Dr. Bruce Lee, professor of health policy and management at the City University of New York, said.

“These are preliminary prices,” Lee said.

Even using current, conservative estimates for Moderna’s vaccine price, analysts predict the company will clean up: average per-share earnings of $6.41 in 2020 and as high as $24.14 in 2021.

By comparison, Pfizer, which regularly brings in tens of billions of dollars yearly, has posted par-for-the-course earnings estimates for this year and next: $2.84 in 2020 and $3 in 2021; in 2019 the company brought in $2.9 per share.

Thomas Speight, an essential worker at a Sprouts grocery store in Pomona, California, is sickened by the dissonance between Moderna’s bottom line and the country’s stimulus needs.

Upon hearing the vaccine would be made free to all Americans, Speight, a permanent residentand a taxpayer, feared he’d end up paying the company twice just to get vaccinated.

That cost won’t rub off on most consumers. The government has agreed to finance Covid-19 vaccines for Medicare and Medicaid recipients and private health insurers and reimburse providers administering vaccines to the uninsured.

Bancel has defended his vaccine’s mark up. The CEO, in a call during the Jefferies 2020 Virtual London Healthcare Conference in November, compared the vaccine pricing to the low-end of flu vaccines.

“We are not, of course, trying to maximize profit,” CEO Bancel said.

Moderna did not return a request for additional comment.

Because the data on Moderna’s production and distribution costs is not yet available, it’s difficult to gauge whether mRNA-1273’s price is indeed inflated.

Both Pfizer and Moderna’s vaccines boast the advantages of new technology that’s produced 90th percentile efficacy rates. Each drug uses synthetic mRNA, a technology that instructs the body’s cells to create a protein that triggers an immune response against SARS-CoV-2, the virus that causes Covid-19.

But while Pfizer’s product requires dilution, dry ice and Antarctic temperatures, Moderna’s drug is a relatively low-maintenance, higher-class product. Singh likened Moderna’s vaccine to a Porsche, and its competitors to Fords—not to knock Fords, he noted. 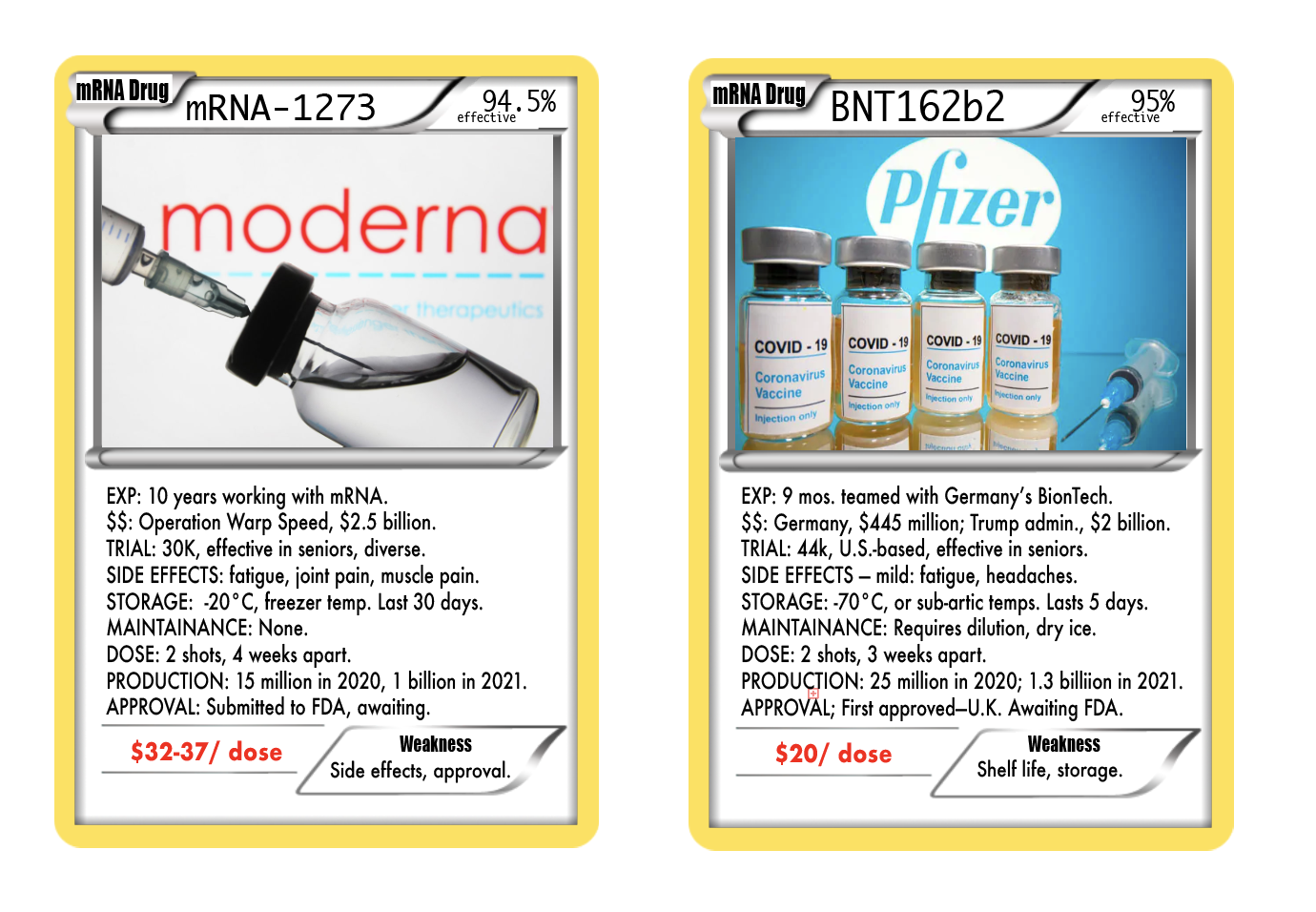 “If somebody told you, ‘Hey, you should sell that Porsche at the same price as a Ford.’ You’d be like ‘No, it’s a Porsche,’” Singh said. “It’s the same concept in medicine.”

Singh said for-profit companies should make the most of the market’s willingness to pay.

“The U.S. government appears to co-own this vaccine. It can insist on reasonable pricing and conditions” Maybarduk said.

For Moderna, seizing the government’s hesitance to lay down the law on prices could ensure profits for years to come.

While early studies on Covid-19 immunity show antibodies lasting for months to a year, there may still be a demand for booster shots. Extra doses would secure a lasting and possibly significant revenue stream, depending on Moderna’s dominance in the U.S. market.

Follow-up shots to keep the coronavirus at bay could bring Moderna $10 billion in annual revenue, Salveen Richter, analyst at Goldman Sachs said in a note.

Barring an unlikely no-vote from the FDA advisory panel, Moderna will be sitting pretty for most of 2021. They let the public foot the bill.