One year later: The tide is turning against Tesla’s Shanghai factory

After waiting almost a month for his Tesla Model 3 to arrive from the company’s Shanghai factory, Jacky Teng canceled his order and opted for an electric vehicle that cost a fraction of the price.

The 31-year-old Guangzhou, China-resident said he was fond of Tesla’s design and expertise with EVs, but changed his mind about its sedan after a friend told him about a sleek, mini-car with a much cheaper price tag.

“I went with the lesser-known car, mostly because the cost was so low. But it had a nice design also,” said Teng, who bought a Wuling Hong Guang MINI EV in August. The microcar is the latest ride to come out of China’s big push into widespread electrification, and it’s yet another rival eating off of Tesla’s plate.

Tesla’s main business is building and shipping EVs, and its China operations are crucial to the company’s growth in the years ahead. While the automaker is an electric vehicle favorite in America, China is home to the world’s largest EV market, accounting for almost half the global EV purchases in 2019.

In a bid to dominate China, Tesla opened its Shanghai production facility in January and the strategy helped the company scale tremendously amid the ongoing pandemic.

But almost a year later, the tide is turning.

Tesla is losing ground with Chinese consumers, slashing prices to win them over and facing a wave of competition. Its prized Chinese factory is now shipping cars to Europe, where Tesla also faces intense competition. If it fails, it will lose its high-flying $608 billion valuation pegged mainly to its popularity outside of the USA.

Tesla’s annual revenue was $24.6 billion in 2019, up more than $3 billion from the year before. Analysts estimate that number to grow to $30.9 billion in 2020. And since the automaker ramped up production overseas, its receipts are projected to swell to $45 billion in 2021.

Choosing the world’s second-largest economy as the location for its first factory outside the US was a smart yet expensive move in 2019 when Tesla secured billions of dollars to break ground and eventually expand the facility.

“The factory has been a paradigm changer for Tesla, in terms of production capacity and opening up to the Chinese market, which is seeing a flood of demand heading into 2021,” said Dan Ives, senior equity research analyst at Wedbush Securities. “There are also massive players there seeing phenomenal success, but Tesla had to go after that opportunity.”

In an initial funding round, the Palo Alto, California-based firm secured about $2 billion in loans to get its Shanghai plant off the ground, according to JL Warren Capital, an investment research firm. In a second round, Tesla secured about $1.6 billion to pay off some of its debt and produce more parts locally, according to documents filed with the Securities and Exchange Commission. The factory paid off big time in its first year. Tesla said it is on track to deliver roughly half a million vehicles this year, up from 367,500 vehicles in 2019. 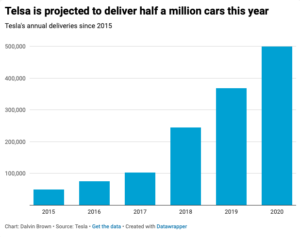 The focus on China enabled the Elon Musk-led company to avoid higher import tariffs imposed on cars made in America and thus create cheaper Model 3 sedans in the country. Tesla doesn’t break down its deliveries by geography. However, Chinese wholesale deliveries show that it went from shipping close to 3,000 Model 3’s locally in January to unleashing close to 15,500 a month in June.

Musk praised the factory’s growth in Tesla’s most recent earnings call in October, claiming the manufacturing facility’s trajectory is “beyond all reasonable expectations.”

But that’s only part of the story.

In the first quarter, Tesla said its China plant could produce 200,000 cars per year, or 17,000 units per month. But since July, it has struggled even to hit 12,000. It only made 10,881 vehicles in September. That month, GM’s two-door Wuling Hong Guang MINI EV became the most sold EV in the county, according to data from the Chinese Passenger Car Association. 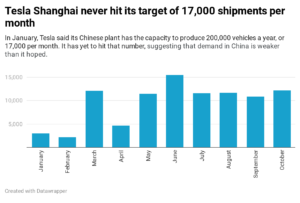 The company’s Model 3 retails for about $43,000. Teng, who canceled his Tesla delivery to buy the MINI EV, paid about $6,000 for a premium version of the new car, which has a much smaller battery and nearly half mileage per charge compared to the Model 3.

Teng said the car meets his needs, enabling him to get around the city and occasionally to work and back.

Tesla skipped over the news of its falling demand in China  in a call with investors, only briefly mentioning that it’s reducing the Model 3’s price in China by 8% – a sign that people aren’t buying it. The automaker didn’t respond to a request for comment, though analysts say it is likely rethinking how easy it will be to remain China’s EV market leader.

“Nowadays, Tesla is not clear how dependent on that market they necessarily want to be, because you have some companies that are becoming quite, quite formidable,” said Joe Osha, equity research analyst at JMP Group.

As it faced waning consumer attention in China, Tesla repositioned its Shanghai factory to focus more on Europe. In October, Chinese media reports said the company plans to ship China-made Model 3’s to Germany, France, Italy and Sweden. But Europe also isn’t a sure thing. 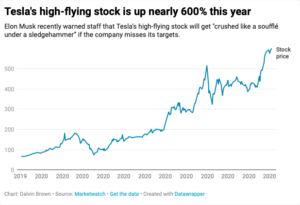 Tesla’s sales in Europe are also down for the year with registration volume falling by 5%, while its closest competition, Volkswagen and Renault, saw surges of 352% and 211% in September. The following month, Tesla’s monthly registrations in growth markets such as Norway, the Netherlands and Spain fell to just 35 cars. That’s down from close to 300 registrations that month in 2019, according to the sales tracker Eu-evs.com.

Tesla is also dealing with a sore spot in Holland where a major taxi purchaser is suing the automaker citing faulty vehicles, according to local media.

Despite the shadowy international outlook, Tesla needed to start its global expansion when it did. 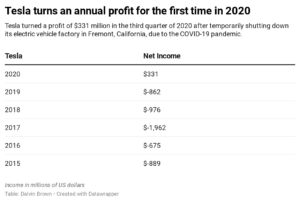 Electric cars aren’t as popular in the US, and stubbornly represented less than 2% of the overall auto market for the past several years.  Tesla is also positioned to have a brighter future ahead in the states, as President-Elect Joe Biden has plans to renew tax credits for American EV buyers.

Tesla also made the right to move to pick China before pivoting to Europe. Both of those countries are focused on clean energy and have booming EV industries. China has the world’s largest car market, while Europe is enjoying record-breaking EV sales.

“Expanding in China and in Europe is all exactly what they should be doing,” said David Whiston, equity strategist of US autos at Morningstar Research. “They’re investing for growth. And despite a few headwinds, the prospects that have never looked brighter.”