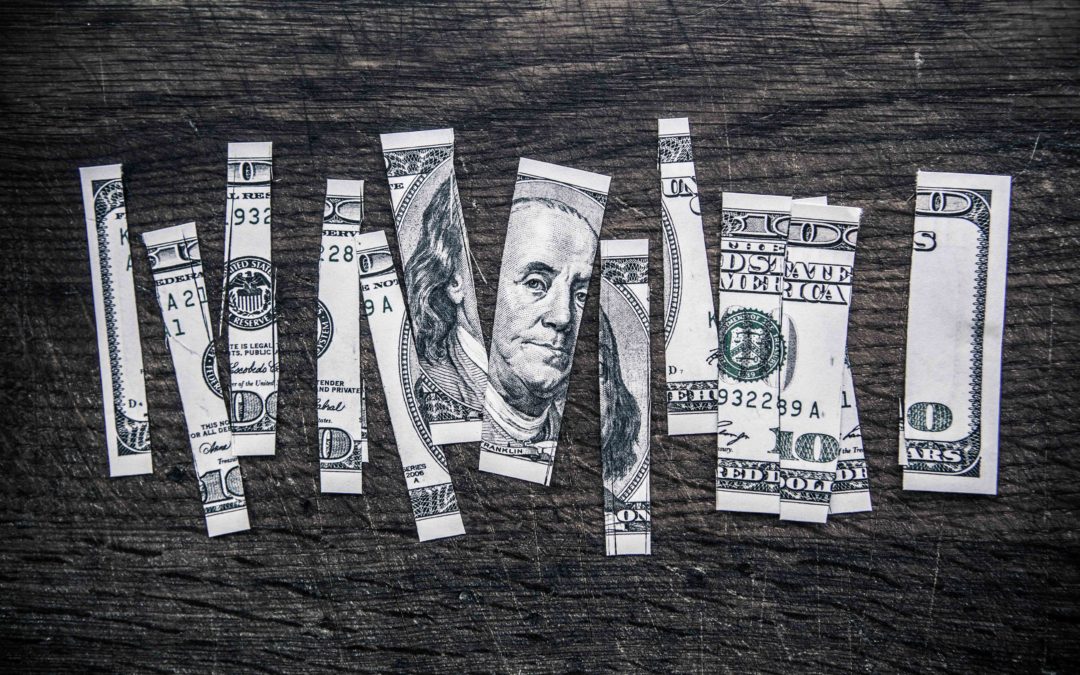 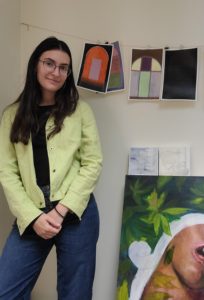 Savanna Sullivan, a 27-year old artist from Portland Me., knew that pursuing a degree in painting from a prestigious art academy would be a difficult and expensive journey. But everyone around her instilled in her that this was the best way to hone her craft, regardless of the cost.

Sullivan graduated from The Maine College of Art in 2016 with a B.F.A in painting. While she continues to paint and contributes work to an artists’ cafe in Portland, she makes her living as a babysitter. She does not have health care or other benefits. She tries to save enough money for emergencies and retirement, but between her living expenses and $650 a month student loan payment, it just is not feasible.

And $650 only covers half the monthly payment. The other half is still being paid by her parents.

“I think being young and also having never worked a real job before and having no concept of money, I assumed I’d figure it out. I basically signed my life away at 18 for a very expensive school,” said Sullivan.

Sullivan is one of many young college graduates for whom saving for retirement and emergencies like the COVID-19 economic meltdown is extremely difficult. Nearly 40 years of rising student debt has coincided with stagnating wages and large cost of living increases in fast growing urban areas, making the path to financial independence for new graduates harder and harder.

“The ideal situation is that you get an education and incur debt because that enables you to fetch earnings on the market way above what you could get without an education. But that income premium has been eroding over time,” said Diego Zulaga, economist at the Cato Institute. 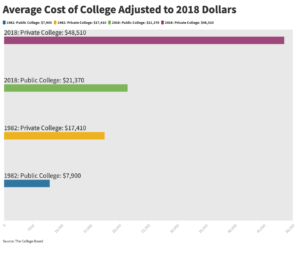 But, over the next nearly 40 years there has been an exponential rise: $21,370 for public college and $48,510 for private college, as of 2018. Seventy percent of college students need to take on loans, and according to the Federal Reserve Bank of New York they set aside an average of nearly $400 dollars a month to pay them off.


Meanwhile, the cost of living in urban areas with the most competitive markets for college graduates has badly outpaced wage gains in those areas. According to the US Census Bureau real incomes in New York City rose slightly over 20% while real median rents rose nearly 80% between 1980 and 2014. Most major cities have seen a similar discrepancy.

“The irony of all of it is that I had no time to actually make my own personal art because I had to work so much to pay for my bills and student loans,” said Sullivan.
Decades of soaring student debt, flat wages, and cost of living increases are correlated with a steady decline in American’s savings.

In 1982, the year college costs began their dramatic climb, the personal savings rate sat at 12%. It reached 11.3% in 1984, and did not touch 10% again until the lockdowns drastically reduced spending options. 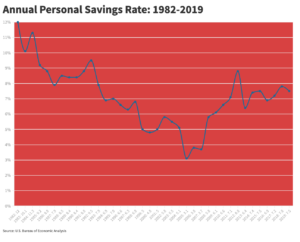 Net national savings were 7% of Gross National Income in 1984. They have yet to reach 7% again, and were just 2.6% of GNI for 2019, right before the pandemic hit the United States. 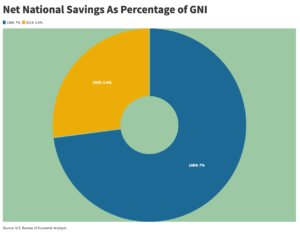 And millennials seem to be less able to save than previous generations. According to a 2019 Morning Consult study of American’s financial habits, 30% of millennials surveyed did not have a savings account while 58% had savings under $5000.

There are other obstacles to recent graduates building savings. Even if they are able to put aside a portion of their income for retirement and emergencies, the average interest on a savings account badly lags even the currently low inflation rate, reducing the true value of the money over time.

Low interest rates encourage people to spend more, save less and go into piles of debt, according to Mark Thornton, economist at the libertarian think tank The Mises Institute.
“It’s much worse than just not saving…Americans aren’t saving much, and they’re spending all of their income and they’re going into debt,” said Thornton.

With The Federal Reserve committed to keeping interest rates at nearly zero for the foreseeable future to stimulate the economy, the only way a saver is able to truly increase their store of money over time is to invest in riskier ventures like stock market funds or even individual stocks. While the stock market has mostly roared over the last four years, its sharp downturn at the onset of the pandemic-and dozens of other times throughout history-shows how quickly savings could evaporate during a crisis.

“The Federal Reserve has got itself boxed in. If they allow interest rates to rise, a lot of the zombie companies in the United States are in a lot of trouble, and the government itself would be in tremendous trouble in terms of paying interest on the national debt,” said Thornton.

To be sure, students who graduate college without significant amounts of student debt can build some savings.

Emma Wolfson graduated from the Main College of Art the same year as Sullivan. She got her B.F.A in printmaking, and now works as an art instructor with special needs students. Unlike Sullivan, her parents were able to pay for her entire education, and she is debt free. This allowed her to save enough to ease worries when her hours were cut during the pandemic shutdown and her live-in boyfriend was laid off.

“I see how difficult it is for everyone I know who is in student debt, that’s the majority of debt I see,” said Wolfson.

“A lot of my friends, they just pay things immediately as soon as they can, they aren’t really saving anything.” 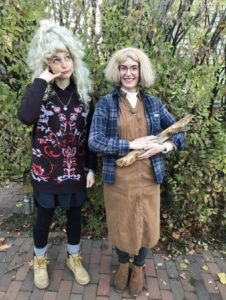 According to Thronton, one of the few ways people can truly save is by consuming goods they need in bulk.

“A way to get around this, particularly in the case of consumer good price inflation, is simply to buy large storehouses of consumer goods that aren’t going to depreciate”, said Thornton.

“You don’t put the savings in the bank, you put it into Sam’s Club.”

Yet, buying large stores of goods can be difficult for young people with limited living space, and personal finance experts have proposed other inventive methods working people can use to save.

Think tank Funding Our Future found in a survey of American’s saving habits prior to the pandemic that 62 percent of respondents said they would save more if there was an easier and faster way to save portions of their paycheck. Based on this, they are working with a company called Daily Pay to create an app that automatically transfers a part of your daily earnings into a savings account the very same day you earned them, in essence borrowing against your next paycheck.

“On demand pay options are ways people can borrow from their future selves when necessary. You can just push a button which puts five dollars into an account which compounds over time. The key here is to make it automated. If people have to go through a lot of hoops, they are less likely to follow through,” said Shai Akabar, economist at Funding our Future.

For Danielle Owen, a recent graduate of Barnard College, the key to saving money is still personal responsibility. Like Sullivan and Wolfson she graduated with a liberal arts degree, but with a moderate amount of debt. She prioritized paying it off as soon as possible.

“My focus was on paying off my student loans. Even more important than saving in my 401k, was paying off the debt I had to increase my net worth faster. I think the general principle is you want to remove your debt before you save for your retirement fund,” said Owen.

Because Owen makes only a moderate salary as a writer for a global health consulting firm while living in expensive Manhattan, she has been forced to cut out what she does not find essential. She tries to buy clothes and household items secondhand, and she rarely eats out. This allows her to build savings while continuing to spend on things that are important to her like going to the ballet and artistic hobbies like learning the harp.

“I’ve always felt there are things worth spending money on that bring me maximum returns on happiness, and there are things you can skirt on. It’s about knowing what makes you happy,” she said.

The recession and uncertainty around COVID-19 have only made her more conservative.

“I’ve been more cognizant of the need to have an emergency fund should something happen to my job,” she said.

For economist Mark Thronton, any shift in values which leads to more saving is badly needed.

“Civilization could have only started if the hunter gatherers had been able to save up enough food and materials to build structures and things of that nature. Society only improves if there is more and more saving,” he said.