The world of gamers that spend countless hours fighting zombies and cowboys is a far stretch from that of scientists fighting the coronavirus and climate change. But even though their world’s couldn’t be farther apart, they still have three things in common, an enemy, a mission and a Nvidia chip.

Graphics processing units (GPUs) are what Nvidia does best and those chips can be used in a wide range of industries including gaming and data research. But, the company has spent the last few years focused on ramping up its capacity to further expand into the frontiers of data, artificial intelligence, and research by scoring groundbreaking contracts while buying up suppliers that support those projects. Its most recent deal, to power the world’s fastest up and coming supercomputer, Leonardo, is currently in development by a non-profit consortium called Cineca in Italy.

But unlike the millions of gamers around the world that desperately await for the release of Nvidia’s next chip, Leonardo isn’t a customer that will bring the company billions of dollars or a high volume of sales, it is more like an insignia on a service member’s uniform.

“Leonardo is more a validation of their technology and their GPU map and how important GPU has become in training and working with higher workloads,” said Rakesh Vijay, Wall Street analyst at Mizuho Securities. “These are used more as milestones just to show the capability of the platform.”

Nvidia’s data sector has been under a microscope as investors and analysts closely watch its revenue growth. The company’s expansion depends on the ability to grow in this area because gaming sales are expected to slow as people go back to work once the Covid-19 vaccine is readily available.

“Investors want to be sure this segment [data] of the business is growing in the next few quarters and it is a big area of focus,” said Ruben Roy, equity research analyst at The Benchmark Company.

Clients like Cineca are crucial to showing off the capabilities of Nvidia’s core technology and the technology of its acquisitions. Nvidia’s website claims its data hardware is “the world’s fastest” and “the most powerful”, when touting the technology’s ability to support AI models for deep learning and high-performance computing.

The sleek marketing campaigns that hype upcoming products such as their traditional gaming GPUs through video ads on their website and using well-known retailers like Asus and Evga as distribution channels won’t have any effect on customers in the data world. The specialized supercomputing sector is taken up by the few pioneers who are leading research in drug discovery, space exploration, and weather modeling. Establishing dominance in this industry has Nvidia going beyond shiny ad campaigns and towards proving its technological capabilities by powering the world’s leading projects, even if it means buying up other suppliers, a move that could put it on the map as the gold-standard for data centers.

The global supercomputer sector is an industry that seeks to find solutions for the world’s greatest challenges such as climate change and the ongoing Covid-19 pandemic. The need creates a race for companies to develop leading-edge hardware that can manage a higher and faster capacity for graphics and data.

Prior to Leonardo’s announcement, Fugako in Japan was acclaimed as the world’s most powerful supercomputer. The hardware is powered by ARM, a manufacturer of central processing units. Nvidia is currently in the process of acquiring ARM as its next big acquisition. Intel also has its share in the industry; its hardware powers the U.S. department of Energy’s supercomputer, Aurora.

Leonardo would put Nvidia on the map and introduce its hardware as the new standard in high-performance computing because the project’s capabilities will surpass both Fugako and Intel’s systems.

Leonardo is part of a larger European initiative being undertaken by the European High-Performance Computing Joint Undertaking (EuroHPC), that is creating four new supercomputers using Nvidia’s most-advanced technology in high-performance computing. The computers will be among the world’s 50 most powerful when completed. Leonardo’s installation is expected to be completed by the end of 2021.

Navigating the global platform has been a challenge for Nvidia. Yet the company has seen increased revenue growth in gaming and data over the past two years, even as it faced challenges that impacted its sales. Trade tensions between the U.S. and China slowed Nvidia’s revenue in 2019. A second drop in overall demand for Nvidia’s chips from China impacted 2020 sales after the coronavirus pandemic led to factory line shutdowns. China accounts for approximately 25 percent of the company’s sales.

Nvidia holds the majority of the GPU Market Share for 2019 revenues at 56 percent, followed by AMD at 26 percent and Intel at 18 percent.

Analysts estimate Nvidia’s revenue growth will improve in 2021 as the consensus estimate for the new year stands at $16.5 billion in revenue. The optimism stems from an expected uptick in sales, partly led by an increase in data center demand. 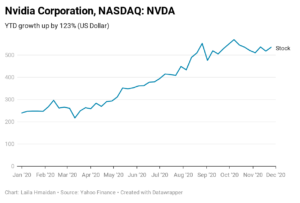 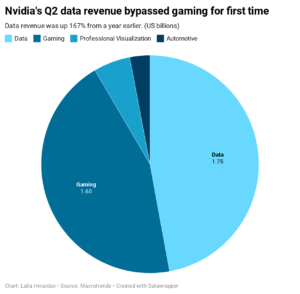 Nvidia is actively implementing a vertical integration strategy to help accelerate the continued expansion of its data sector reach. In April, it completed a $7 billion acquisition of Mellanox, a supplier of computer-networking products. Mellanox contributed 14 percent of the data revenue in the second quarter of 2020.

“The biggest overall expansion will come from the data side of the segment, driven partially by the acquisition of Mellanox, and investors are very focused on it,” said Roy.

Mellanox’s technology has been used by many of Nvidia’s clients, including the supercomputer Marconi, which was also built at Cineca at the beginning of this year. In October, Nvidia announced the same Mellanox technology would also be used in Leonardo.

Sanzio Bassini, head of the High Performance Computer Department of Cineca, proudly touted an image of Marconi in his Zoom background as he discussed the center’s supercomputing capabilities.

“Marconi was installed at the beginning of this year, it was ranked in the top 500 powerful systems in the world… Leonardo will be an evolution in that thread,” said Bassini.

The acquisition of Mellanox now means that Nvidia powers two-thirds (333) of the world’s top five hundred supercomputers, up from 203 supercomputers for the two separate companies combined since 2017.

Nvidia’s focus on powering the world’s most advanced supercomputers could prove to be its biggest success, beyond its sleek marketing campaigns, major acquisitions and its vertical strategy, because if Leonardo is able to solve some of the world’s biggest problems, it would make the hardware supplier a pioneer in the sector, putting it on the map and making it attractive to the private and government sectors alike.