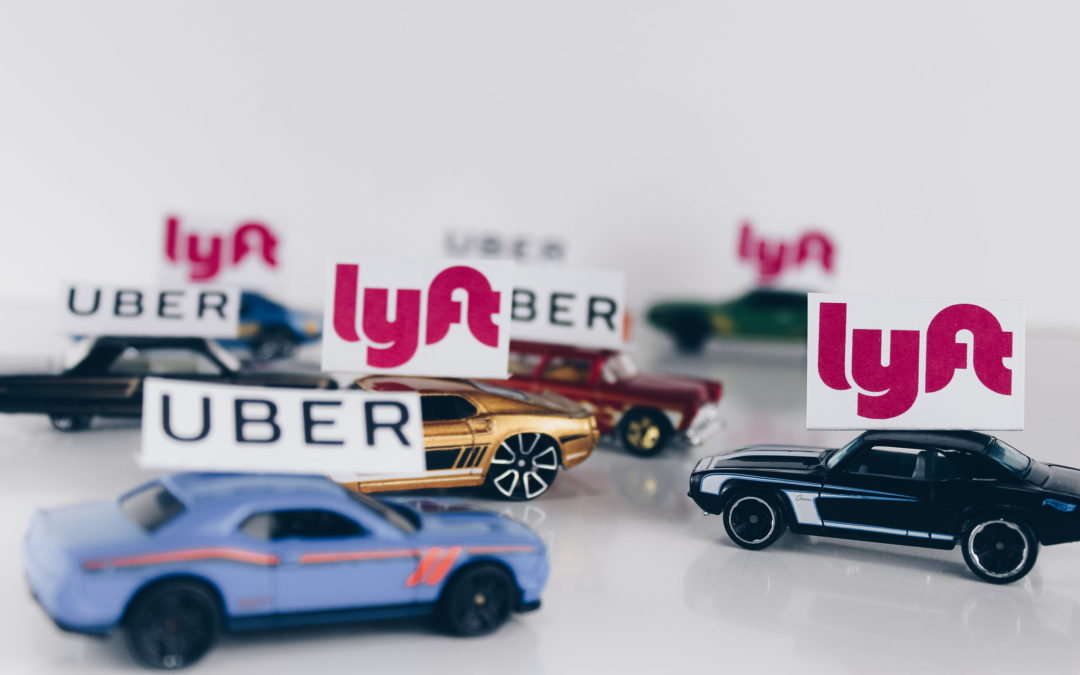 Ridesharing companies Uber Technologies Inc. and Lyft Inc. have seen their stocks stuck in neutral as the S&P 500 motors ahead.

After some of the most disappointing IPOs in recent history, Uber and Lyft saw their stocks plunge when the pandemic almost shut down their business. Now a recovery that accompanied the ebbing of the coronavirus has turned into another decline as the apps’ inability to meet demand and mounting losses offputs investors. 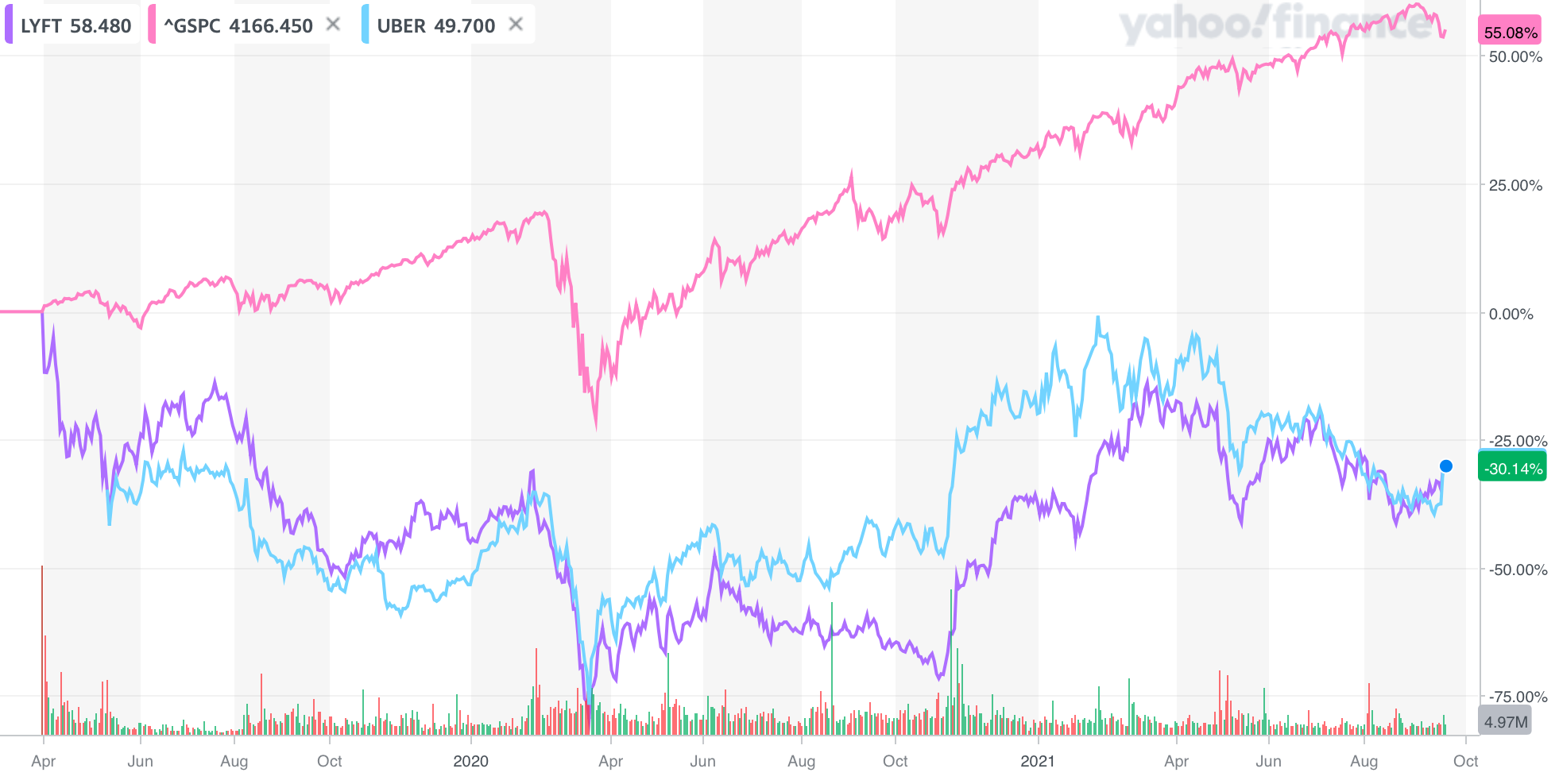 Uber and Lyft both aim to record a profit by years’ end. If they are able to meet that goal, investor sentiment will likely improve. “The street wants to see that happen,” said Steve Fox, CEO and founder of Fox Advisers.

The pandemic slammed the rideshare companies, slashing over 60% of both stocks’ value over the course of a month. Lyft hit a record low of $16.05, while Uber dropped to a rock-bottom $14.82. Both stocks mounted a recovery over the next year, roughly tripling in price, with uber reaching an all-time high closing price of $63 in February 2021.

Since April, though, both saw their fortunes fade again as Uber dropped over 25% and Lyft nearly 20%. Over the same period, the S&P 500 posted gains of over 10%.

As it became clear that demand rebounded for rides much faster than drivers were returning, Uber and Lyft faced a dilemma: How to incentivize workers, many of whom left for grocery and restaurant delivery services, to rejoin the apps. Uber announced a $250 million “stimulus” for drivers in April, while Lyft has spent $572 million on incentives through the second quarter.

Yet these large expenditures made some investors nervous: Neither company was turning a strong profit, causing prices to dip despite promises to be in the black by year’s end.

Yet things might be looking up, at least for Uber. Its stock ticked up 15% over the past week as the company projected better-than-expected numbers for the third quarter. Instead of a $100 million loss, they now anticipate its core businesses to generate profits of up to $25 million.

While both stocks have taken a beating since their IPO, some investors look past the current challenges and are confident in the potential they see.

For James Mellin, an accounting master’s student at the University of Virginia, the most important thing is the future––in 10 to 15 years, he sees a world where ridesharing will be a permanent fixture of life.

“They’re so popular with Millennials and Gen Z. To live in a world where everybody has a smartphone and with one click, you can get someone to drive you from point A to point B––that’s only going to grow in popularity,” said Mellin. “There’s nothing that’s going to overtake that––unless you can disapparate, like in Harry Potter, from one place to another.”

Mellin sold his shares of Uber last spring as the price began to decline. While he doesn’t currently own Uber or Lyft stock, he plans to buy Uber again sometime early next year, once there’s more clarity around where the economy is heading with inflation and the delta variant.

While both companies are seen to have been managed impressively in the face of adversity, many analysts favor Uber. Though this isn’t reflected in the stock prices––Lyft has been trading higher than Uber since February––analysts’ ratings are more bullish for Uber.

The UberEats network gives Uber more options for monetization than Lyft, which many found particularly attractive during the pandemic when ridesharing was all but suspended.

Ed Yruma, managing director at KeyBanc Capital Markets, observed in a research note that UberEats looks to be gaining market share in key cities and that substantial opportunities exist in grocery delivery.

Uber’s delivery business looks poised for long-term growth overall. “We think the overall delivery landscape (food, groceries, among other items) remains in the early innings and Uber can serve as a critical last-mile solution for retailers,” Yruma said.

Uber also has a strong presence overseas, whereas Lyft’s operations are limited to the U.S. and Canada.

Fox says that analysts and investors are often too North American–centric when evaluating Uber. “They have very strong positions outside of the United States in Latin America, Europe, and Asia that don’t get discussed enough,” he said. “I think there’s a lot of ways you can come to the conclusion that the stock should be trading a lot higher.”

Yet worker classification remains a major source of uncertainty for investors moving forward. “What’s the hardest thing to figure out going forward with owning any of these stocks––it’s got to be regulatory,” said Fox.

Last week, a Dutch court found that Uber drivers are employees, while last March drivers were reclassified as workers in the U.K. Massachusetts may follow California’s lead, putting Uber and Lyft’s worker classification system––and, by extension, their business model––to a vote.