WWE (NYSE: WWE) is trying to find new streams of revenue amid a post-pandemic world.  The company has begun to dive into the world of blockchain technology, selling non-fungible tokens (NFTs).

NFTs are digital assets which are bought and sold online, typically with cryptocurrencies, according to Forbes.  The assets are said to be one of a kind and in limited supply, and have unique codes which differentiate them from one another.

WWE’s foray into this new universe began this past April at the company’s headline annual event, WrestleMania.  The first NFTs that went on sale were in honor of coveted WWE star, The Undertaker.  A second set featuring WWE star John Cena went on sale the weekend of August 20, 2021 in conjunction with SummerSlam, another major WWE event.

“These are the baseball cards of the digital world,” said WWE’s president and chief revenue officer Nick Khan on the company’s second quarter earnings call.

The NFTs are another way WWE is seeking to keep revenue high in the improvement of performance metrics.  After trading at a pandemic low of $33.80 on March 23, 2021, the stock has consistently increased as the company has welcomed fans back to their live events and the increased monetization of their viewing content.  Trading at the close of business on October 11, 2021 saw the stock at $58.28. 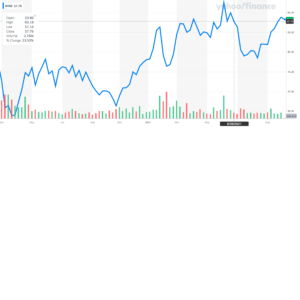 Michael Hickey, research analyst for Benchmark Co. LLC says although still in the early stages, WWE selling NFTs is “definitely intriguing” and credits the deals controlling their performers name, image and likeness as a reason the company’s NFT drops may find success. “It’s really interesting just because the library of content they have is really powerful and of course they’re making content every week,” he said.

WWE experimented with a few different prices for its latest drop of NFTs. Cena’s NFTs had two tiers, a Gold tier of 500 NFTs that cost $1,000 each and a Platinum tier which was auctioned off to the highest bidder.  The Undertaker featured tiers of Bronze, Silver, Gold and Platinum levels and prices ranged from $100 to $100,000.

Reception from the two drops has been mixed.  While the Undertaker’s NFTs have completely sold out, Cena has sold just under 100 as of this writing.

“I talk a lot about failure — this idea failed,” said Cena earlier last month at a convention panel.. “Myself and the folks in the WWE thought $1,000 was a fair price point. We were wrong. We were absolutely wrong.”

Eric Handler, media & entertainment research analyst for MKM Partners LLC says WWEs foray into NFTs is still in a stage of experimentation and it is too early to determine whether it will fail or succeed. “They’re just dipping their toe in the water.  I think they will continue to experiment and see what works and what doesn’t work.It’s all part of WWE’s growing initiative to expand its consumer product offerings.”