Beyond Meat’s Partnership with McDonald’s is the Gamechanger the Company Needs Right Now. 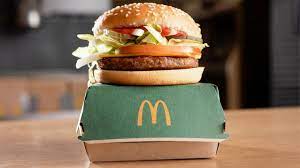 Beyond Meat’s new deal with fast-food giant McDonald’s could boost the plant-based meat company and help promote the entire industry.

Earlier this month McDonald’s introduced its new plant-based burger developed with Beyond Meat in eight U.S. stores, one month after a 100% vegan version of the burger was introduced in Europe.  Beyond’s stock price (BYND) jumped 5% a share to $104.51, the S&P 500 was flat on the day of the McPlant trial run in the U.S.

Beyond Meat needs this partnership to be a success. The company hit a rough patch this year. Beyond Meat recently lowered its revenue expectations for the third quarter citing lower retail sales, although net revenues were up 31.8% year-over-year to $149.4 million in the second quarter. But the weak guidance coupled with some downgrades by analysts at Piper Sandler and CFRA have caused investors to lose faith in the stock.  The price has dropped 37% in the past year to close at $99.77 at market close on Nov. 5th.

An analyst at the investment bank BTIG, Peter Saleh estimates that a full national launch of the McPlant at more than 13,000 McDonald’s locations could add as much as $200 million in sales for Beyond Meat and could boost the top line for the company by as much as 35% annually.

The likelihood of a full scale rollout is high as the McPlant burger has already been introduced in 250 McDonald’s locations in the UK, where demand for vegan and vegetarian options is greater.

Partnering with McDonald’s is a huge gamble but one that makes sense given the track record for the company. Beyond Meat has always had an aggressive approach to building partnerships in the foodservice sector.  The company also has agreements with Yum! Brands home of KFC, Pizza Hut and Taco Bell as well as PandaExpress, and A&W .

Not all of their partnerships have worked out as Beyond’s collaboration with Tim Horton and Dunkin both ended with the companies dropping their products. McDonald’s has also had its flops with the ill fated Arch Deluxe in the mid-1990s and their much maligned McPizza. Both companies have invested three years into developing this product which is a good sign for its future success.

McDonald’s is a marketing powerhouse with more than 39,000 stores in over 100 countries.  Fans of McDonald’s who might not normally try a plant-based burger could be won over by the McPlant.

Demand for plant based food is already booming, according to MarketsandMarkets. It estimated the plant-based meat market is worth $4.3 billion in 2020 and projected to reach USD 8.3 billion by 2025. Vegan, vegetarian, and flexitarian (people who eat some meat) diets are also more popular with Gen Z and Millennials than older consumers.

Fans of Beyond Meat are excited as several positive reviews of the McPlant are already online with most customers saying it tastes almost identical to a meat-based McDonald’s burger.

Shareholders are also optimistic about this collaboration.

“McDonald’s like everyone else, they’re into this for making money, ” said Jesse Shuja, shareholder and host of PlantStock on YouTube. “More people are going to want to buy an alternative that tastes as close to meat as anything out there. I think this is going to be huge.”