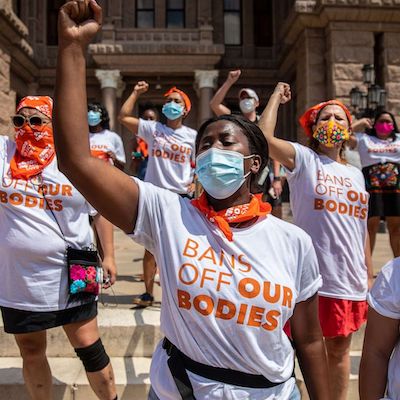 The Fund for Texas Choice is a practical fund that is desperately trying to cope with an onslaught of requests from women and people needing to travel out of state because Texas’s new law sharply restricts abortions.

“Typically, we would help around 40 clients a month and now we get up to 40 calls a day,” says Sahra who declined to give her last name due to the sensitive nature of her work. Sahra is a manger at Fund Texas Choice, a practical support fund that helps clients financially with the logistics of travel.

Abortions are a regular part of reproductive health care and Texas’s recent SB8 bill has increased the financial burden on the seven million women and menstruating people of reproductive age in Texas who cannot access an abortion after six weeks of gestation.

In October, the Texas Policy Evaluation Project reported a significant drop, 59%, in abortions within the state of Texas since the law was implemented in September.  The Guttmacher Institute reports that if some or all of the abortion clinics were shut down in Texas, the average driving distance to a clinic for someone who needs to access abortion care would on average grow from 17 miles to 247 miles increasing the driving time by 3.5 hours if someone were driving nonstop for 70 miles.

For a one-way trip to a clinic, someone making minimum wage in Texas –$7.25 an hour –would have to put those 3.5 hours of earnings toward gas expenses in a car that gets 25 miles per gallon if the gas price was around $2.80 a gallon as it was in August of this year.

Someone making $58 a day would have to put a little over $25 of their wages towards a one-way trip that would cost $27, or a full day’s wages for a trip to the clinic and a return trip home.

In a state where as of 2017, Texans could not use public or state-regulated  private health insurance to pay for an abortion, the introduction of SB8 –the most restrictive abortion ban in the United States –greatly reduces the window of time that a person can access the care they need. The ban does allow exceptions for a medical emergency, but there are no exceptions for rape or incest. 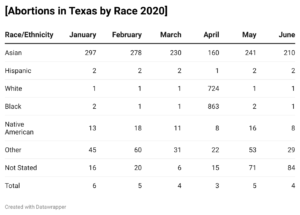 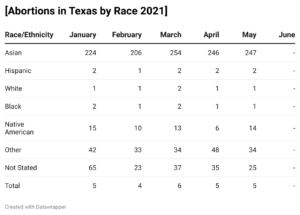 “Primarily, people are going to Oklahoma or New Mexico,” says Sahra. “But we also have a lot of people going to Kansas and Louisiana. We’ve had few people go even further than that. We’ve had people go to Seattle, Chicago or Atlanta.”

In many areas  throughout the South, even obtaining information about abortions is difficult. For one woman who is a medical resident and wants to remain anonymous until she finds a job, accessing an abortion in New Orleans, Louisiana wasn’t easy. She booked an appointment with her obstetrician’s office. The nurse excitedly told her she was pregnant and when the resident reminded the nurse that she would like to access an abortion, the nurse responded by saying that they only took care of pregnancies at that clinic.

“She was very reluctant to give me any kind of phone number or refer me to any kind of provider. And eventually, I lost my patience and told her that I was a physician and that this is a choice that I’m making to save my career. And to save my future,” said the medical professional. She [the nurse] immediately was apologetic and backed down and flitted about trying to find me the right phone numbers because I demanded to be referred to somebody who could provide me this and that I was not some kind of depraved creature for wanting it and needing it. You know, and it was terrible. I ran out of the office crying in the rain.”

The medical professional had to travel outside of the city because no one was answering the phone at the Planned Parenthood clinic in New Orleans. She was able to get someone on the phone in Tallahassee, Florida and so she drove about 5.5 hours. In a strange twist for a high-income earner, she ended up paying much less for her care.

The Guttmacher Institute reports that on average abortions without insurance in 2014 were around $500 for first trimester care and $1,195 for later term abortions.

In addition to costs, the stigma around abortions is another barrier that activists and advocates point to. In addition to logistical support, practical and procedural funds seek to counter that stigma. Of abortion stigma, Denise Rodriguez, communications manager at the procedural fund Texas Equal Access Fund says,

“It’s stigma against abortion that enables a lot of these politicians to be able to try and pass these laws. Abortion stigma is what makes people feel like they can’t talk about their abortion.”

For those seeking to aid abortions, donating to abortion funds or organizations like Planned Parenthood is a legally protected First Amendment activity in Texas. Also, creating a culture where less stigmatization exists can also provide some aid. For those who need to access care, a procedural or practical support fund in your state may be in a position to provide logistical and financial support.