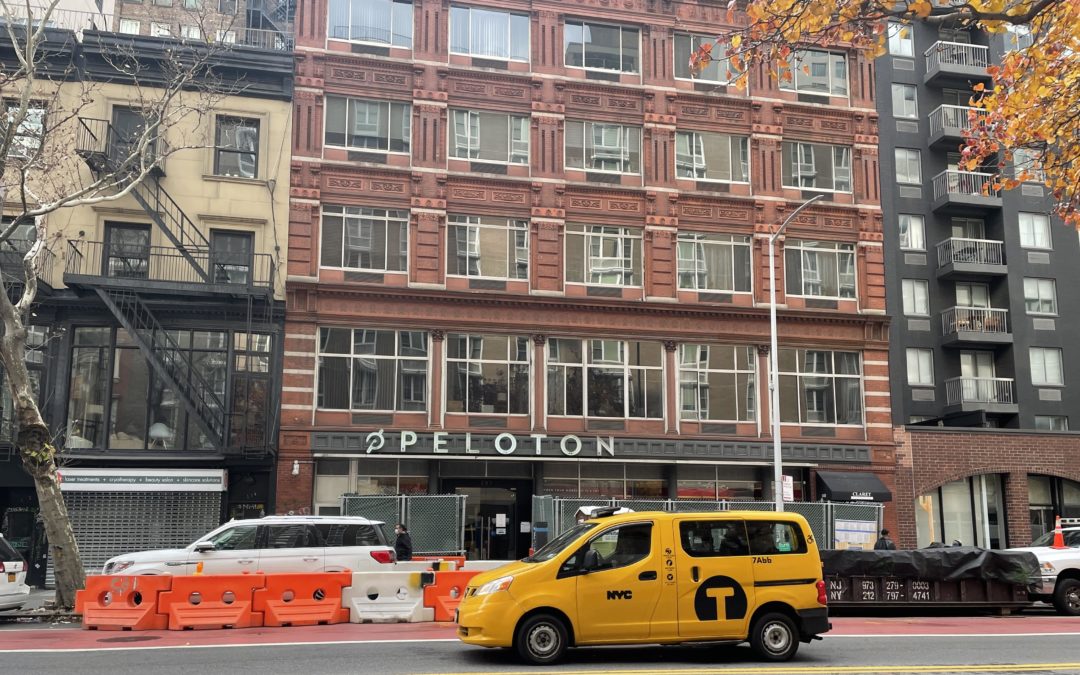 Jessica Katzen bought a Peloton bike after her favorite Hot Pilates studio closed during the pandemic. She has no plans to return to her gym, but she is not convinced by Peloton to expand her home gym by purchasing the Tread.

“I hate running,” said Katzen. “There’s no way the Tread would fit in my apartment.”

Peloton experienced booming sales and a surge in subscribers during the pandemic after lockdowns forced people to workout from home. Its core exercise product, the Bike became incredibly popular and annual revenue increased fivefold.

But sales growth has stalled and profitability now seems elusive. Even though it lowered the price of the Bike by $400 to compete with other connected fitness products and re-launched its lower-priced treadmill, known as the Tread, in August, the latest earnings report was still weak. Following the report, shares plunged 35% the following day, and have descended even more in the following weeks, now closing at $37.80 a share, compared to closing at $167.42 a share on January 13, 2021.

Peloton’s product strategy has not been effective enough to offset the decline in consumer demand. 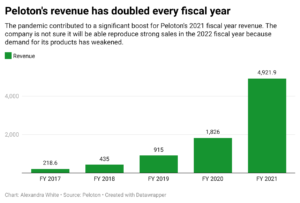 The company’s product strategy first encountered a challenge in April when a child died from being pulled underneath the treadmill. As a result, the Consumer Product Safety Commission warned consumers in April to stop using the Tread over safety concerns and urged the company to recall its treadmill products. At first, Peloton did not follow the commission’s advice but eventually, it recalled the Tread and the higher-end Tread+ in May.

“The biggest challenge in the short-term is to get Tread on brand,” said Jason Helfstein an analyst at Oppenheimer & Co. “Ever since a toddler died on the treadmill, they’ve had terrible publicity around the treadmill.”

The company expected demand for its products to remain strong post-pandemic, and quickly pushed the Tread back on the market. It re-launched its lower-priced Tread in August and expected existing customers to buy it.

On a November earnings call, Jill Woodworth, chief financial officer at Peloton, said that the company expected 50% of Treads to go to existing connected fitness households.

But the most recent earnings report showed that customers are not jumping at the opportunity to purchase the Tread. 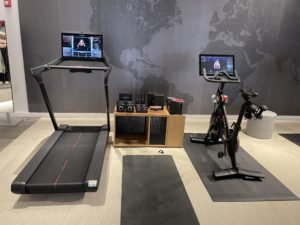 The Tread and BIke in the Peloton showroom in Manhattan. Photo by: Alexandra White

To make matters worse, demand for Peloton’s popular Bike products is declining, even though the company lowered the price. The company adjusted its 2022 fiscal year outlook downward by $1 billion because of the decreasing demand.

“As we think about the three or four or four contributors to the reduction guide, I would say the bike portfolio is the largest,” said Woodworth on the November earnings call. “And that is obviously a decrease in the demand profile.”

The Bike price reduction also contributed to a drop in revenue. In August, Peloton reduced the price of the Bike by about 20% to $1,495. The company tried to convince analysts on the August earnings call that the decision to lower the price was an offensive strategy to find more customers, rather than a defensive strategy.

But the price reduction led more consumers to purchase the cheaper Bike, rather than the Bike+, which hurt revenue. The Bike made up about 50% of Bike sales before the August price cut, compared to 75% of sales this fall.

“We have also seen a richer than anticipated mix of Bike sales versus Bike+, further impacting both revenue and our gross margin expectations,” said Woodworth on the first quarter of 2022 earnings call.

Sales from connected fitness products represent 62% of total revenue. As customers flocked to the cheaper Bike, revenue was impacted and the last quarter’s total revenue of $805.2 million was below analyst and company guidance. The company adjusted guidance and expects 2022 fiscal year revenue to range between $4.4 billion to $4.8 billion. Analysts expect the company’s revenue to increase to $4.57 billion. 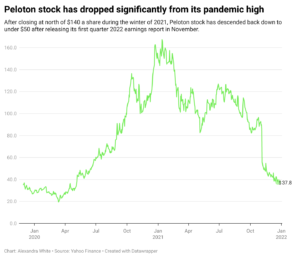 Investors are now skittish that Peloton can regenerate its pandemic sales boom. Some analysts are not surprised by the stock’s rapid descent.

“Peloton stock was detached from reality,” said Simeon Siegal, an analyst at BMO Capital Markets. “The stock was where it was because people expected pandemic-level growth to continue.”

The company burned through $650 million in cash in the first quarter of 2022. It spent 35.3% of its total revenue on sales and marketing last quarter, compared to only 15% a year earlier. It said on its most recent earnings call that it had enough capital, but about two weeks later it announced a $1 billion stock offering to raise capital.

Peloton is now aggressively advertising its Bike product and the price reduction to find more customers.

The advertising and reduced price lured in Aidan Taelor, who purchased a Bike the week before Thanksgiving and took advantage of a Black Friday deal where he could purchase the Bike and accessories for $1495 before taxes.

“The Black Friday deal did influence me,” said Taelor. “But I have been planning on buying one for a few months now.” 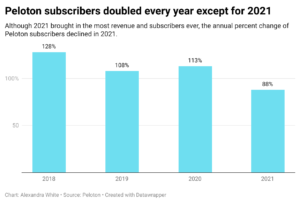 The treadmill could be a big market for Peloton and the company said that the Tread could be an even bigger seller than the Bike. The global treadmill market was valued at about $3.3 billion in 2020 and is expected to reach $5.9 billion by 2030, according to Allied Analytics, a global market research firm. In comparison, Allied Analytics reported that the global exercise bike market was valued at 1.2 billion in 2019 and is expected to reach only $2.3 billion in 2027. 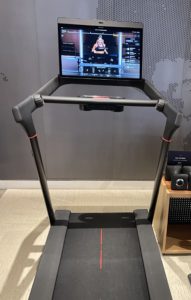 But Peloton has a branding challenge. The company name, Peloton, is named after a pack of bicycle riders, so many people who purchase treadmills or attend Orange Theory or Barry’s Bootcamp classes may not associate the company with treadmills.

Some analysts have said that the company needs to increase product awareness. But on its most recent earnings call, Peloton said it plans to optimize marketing spending and limit showroom development to save money this upcoming quarter.

The company can’t seem to catch a break. It agreed to allow its Bike to appear on the Sex and The City sequel, And Just Like That, but the character Mr. Big, played by Chris Noth, ends up having a heart attack after riding his Peloton Bike. The day after the episode aired, the stock dropped 5% closing at $38.51 from $40.50 a day earlier. Peloton quickly released a cheeky ad a couple of days later with Chris Noth riding the Bike that acknowledged he was still alive. But a couple of days later Noth was accused of sexual harassment and Peloton pulled the ad.

That’s more advertising money down the drain for a company that is struggling to recover its pandemic boom.