Best Buy is overhauling its stores to keep up with online deliveries. Will it be enough to take on Amazon and larger rivals? 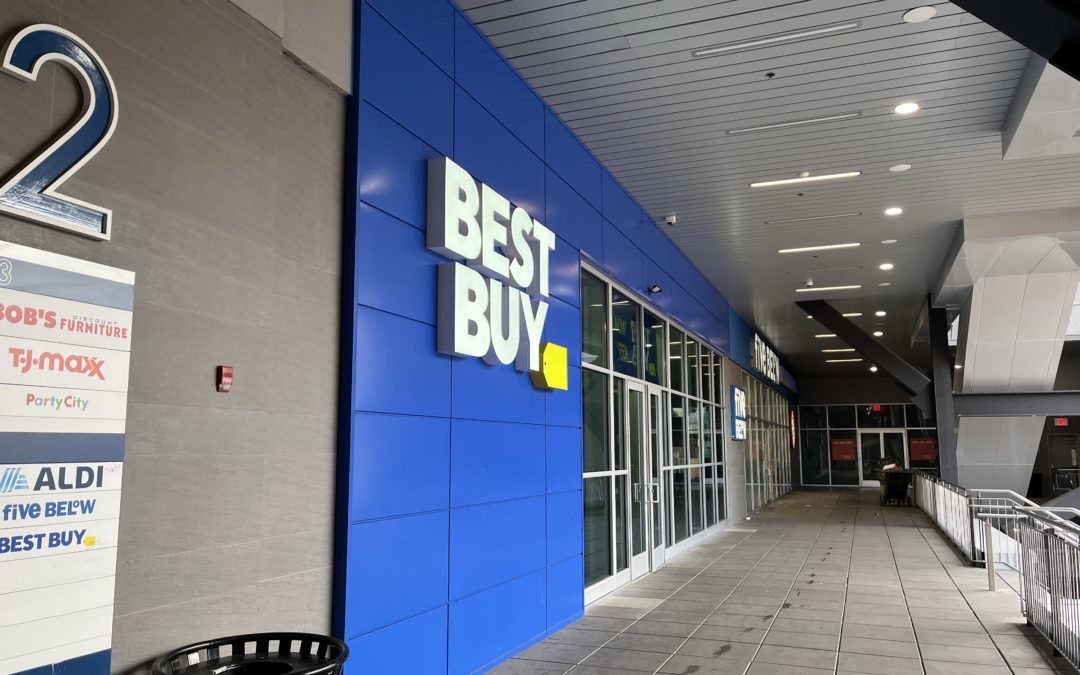 Best Buy Co Inc. (BBY) is merging its in-store shopping experience with delivery as it scrambles to meet the rising demand for online shipping.

The Minnesota-based electronics retailer began in March 2020 shifting its brick-and-mortar business towards a digital one.

Rather than moving to a completely warehouse-driven operation, Best Buy wants to use its stores to boost its delivery speeds and volume without sacrificing the experience that customers are familiar with, of getting products and help in-person.

It’s testing this out in North Carolina at five smaller-sized stores that measure 15,000 square feet, and in a 30,000-square-foot outlet-sized store. For example, at its Charlotte warehousing location, the retailer is offering purchase pick-up only, and no in-store shopping experience.

The shift comes as the 55-year-old retailer is trying to compete with corporations including Amazon, Walmart and Target, all while shrinking its international footprint to focus on boosting sales in the US. The company shuttered 40 stores in Mexico this year, which cost it about $90 million in revenue.

The decision to test these new store models, primarily influenced by the pandemic, has boded well for the company, which mainly operates in the U.S. and in parts of Canada.

Same day delivery was up 400% during the third quarter of 2021 compared with 2020, and the company said it nearly doubled the percent of products delivered within one day.

In just the last two years, however, the company has undergone significant management changes. It’s previous CEO is why the retailer is still around today.

Best Buy’s pulse continues to beat because of its former CEO and chairman Hubert Joly, who is credited with turning around the electronic retailer in the face of stiff uncertainty.  Joly saw an opportunity to reinvent the company by lowering inflated product prices and building an online shopping experience that had been nonexistent. He stepped down as CEO in 2019, by which time the company held steady with increases across revenue, market share, and margins.

Joly’s strategies helped the company, but only momentarily. The retailer has increased revenue by 15% over the past five years, and brought in $43.6 billion in 2020.

Still, it’s faring worse than its competitors. In comparison, annual revenue for competitors like Walmart reached $559 billion in 2020, while Amazon’s revenue inched just above $386 billion. Target skyrocketed over 20% to land at $93 billion, and still, Best Buy trails behind.

It’s not clear whether Best Buy’s shrinking in-store footprint will help it boost online sales either. This year the company did, however, bring in the highest in annual profits, nudging over $10 billion, the highest amount in the last five years.

“I think it’s too early to tell if it’s working,” said Steven Valdez, 27, who works security at a Bronx Best Buy location. The store, an estimated 15,000 square feet, is located in the Riverdale neighborhood, and opened in July of this year.

While delivery did pick up, according to Valdez, 2022 will give a better outlook of the store’s success long term.

The retailer, which is known for its vast array of electronic products, is expected to continue navigating supply chain constraints, higher costs and even shrinking stock. That’s in part due to the increase in organized retail crime, which has affected a number of retailers, including Best Buy. With fewer products, the retailer has less items to ship and could slow down delivery.

Employees in-store are also playing a larger role, according to Barry. More than 400 stores are focusing on employee delivery, which means increased efforts by team members to track, package, and ship items.

On the other hand, retailers are shifting away from delivery intermediaries, following in the footsteps of Amazon, Nate Shenck, North America Retail Leader at Boston Consulting Group, said.

“We’ve seen an uptick in retailers developing their own delivery solutions,” Shenck said. “A clear example is Best Buy with its employee delivery capability.”

During the third quarter, more than 90% of online orders were available for pickup in less than half an hour of being placed. Now, over 40% of orders customers made via the web are picked up by curbside delivery.

The ambition to become an omnichannel retailer that gives consumers a seamless shopping experience, whether it be in-person or online, could pay off in the long run.

Barry, who became CEO in June of 2019 has been with Best Buy for over 20 years. Barry has served in executive positions during her two-decade stint and most recently held the title of chief financial and strategic transformation officer.

During her tenure as CEO, the retailer’s stock has held alongside the S&P 500.

According to Barry, the company is in a unique position to expand its outlook of operations. With 15% more inventory going into the fourth quarter, the company expects it will be able to continue filling orders and getting them out of the door quicker.

The shift comes at a time when consumers are looking for flexible shopping options.

“This is a pivot toward the future, as the industry acknowledges that accelerated online shopping behavior during COVID-19 is here to stay,” Shenck said. “Shoppers want convenience – therefore, the retailers who can get products to customers at the speed they want, and in the most efficient and profitable fashion, will be the future winners.”

But at the same time, now is not the time to neglect brick and mortar storefronts. Those locations will continue to play a critical role in the overall retail experience. If companies like Best Buy can find a way to merge the two, it could continue to stay competitive.

“The firm generates the bulk of its sales in-store, with mobile phones and tablets, computers and appliances,” said Sean Dunlop, equity analyst at Morningstar. But because of the pandemic accelerating e-commerce fulfillment, and doubling Best Buy sales, Dunlops estimates that about 30% of sales moving forward will be led by e-commerce. That prediction is a reflection of the 31% of sales that the company made due to e-commerce. Just a year ago, e-commerce sales accounted for only 16%.

The transition is representative of an industry-wide trend, but it’ll depend on the timing that retailers take to embrace e-commerce methods, according to him. For retailers that have jumped on the trend, like Best Buy, getting ahead of the fray is about being intentional, even after the hype has died down.

“COVID-19 normalized e-commerce to a great degree, and this comfort has continued to drive channel shifts across the retail sector,” Shenck said. “Shipping and delivery will continue to grow in importance for the success of retailers like Best Buy.”