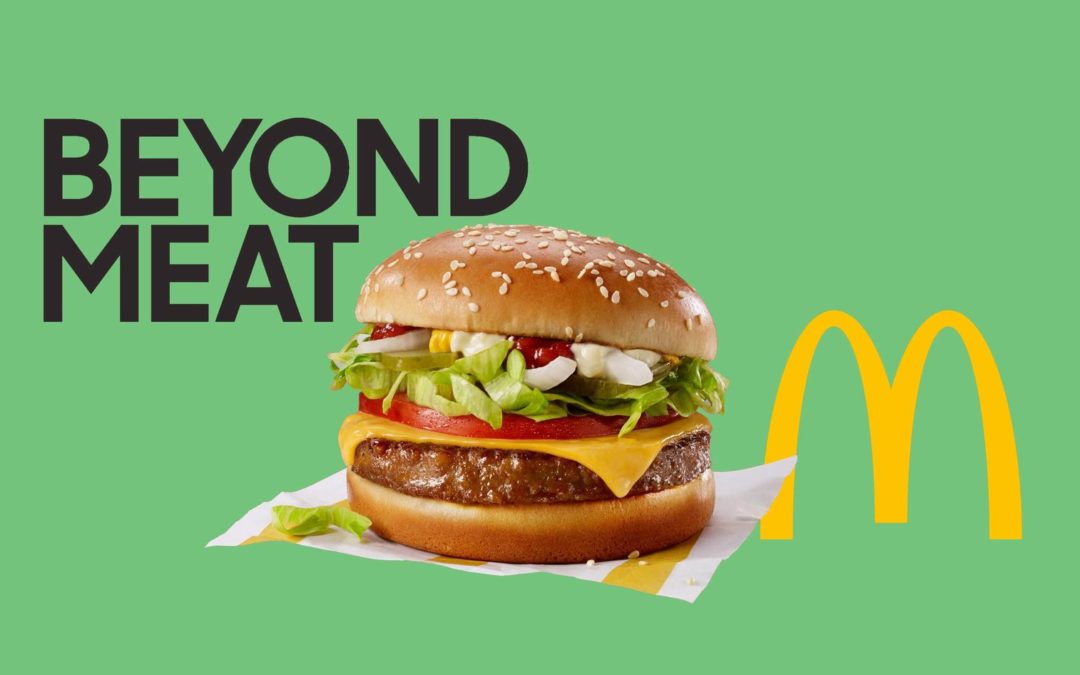 Beyond Meat’s growth has gone from explosive to anemic and could collapse due to increased competition and lack of demand. Its strategy of partnering with much larger foodservice giants such as McDonald’s could help change the course for the company.

Ethan Brown, a passionate vegan with a background in the green energy sector, founded Beyond Meat in 2009 as a means to reduce the greenhouse gases produced by the meat and dairy industry. The company started with Beyond Chicken Strips based on a formula developed by two University of Missouri professors.  .

During the pandemic, Beyond Meat continued to climb while shoppers stockpiled food in their pantries and freezers. Demand for Beyond Meat’s products has since dropped off a cliff and the stock has plummeted. A partnership with McDonald’s, the largest quick service restaurant (QSR) in the world, could help put the company back on track or damage the brand.

Brown’s strategy has been getting Beyond Meat’s products in the foodservice market in the hopes that customers will fall in love with Beyond Meat and then pick up plant-based burgers, chicken fingers, or breakfast sausages in their local supermarket.

McDonald’s is its biggest partner yet. The companies in October launched the McPlant burger in eight U.S. stores as well as more than 250 stores in the UK and across Europe.

Beyond Meat was once a hot stock that traded as high as $239 a share in late July 2019 as investors treated this niche food company more like a tech stock and responded to the hype and expectations of increased demand for meat alternatives. The stock has dropped back down to earth, to $69 in recent days. 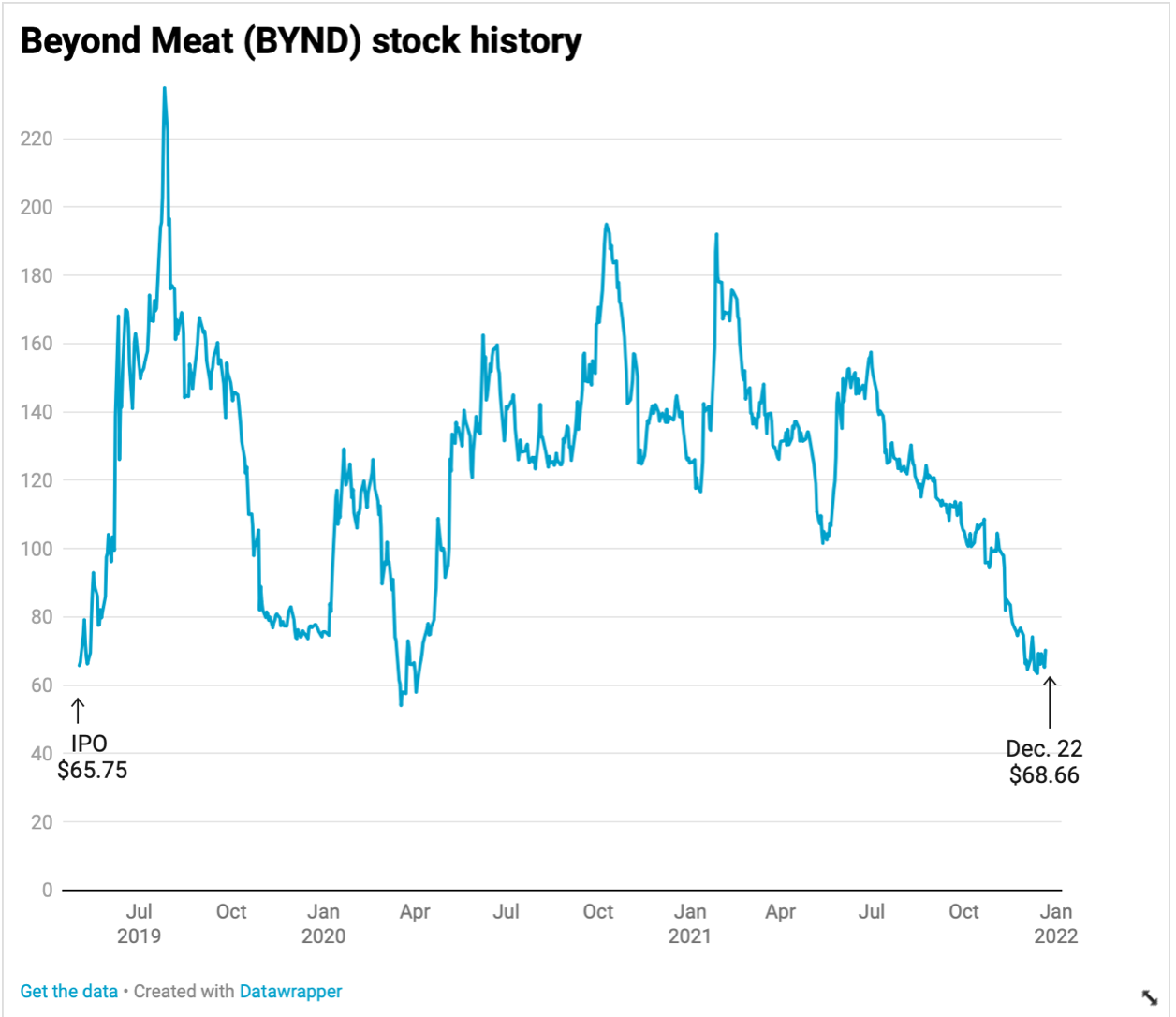 The company’s revenue has risen each year since it went public in 2019. Revenue shot up dramatically at first, but Beyond Meat’s estimated revenue for 2021, $461 million, is only slightly higher than 2020, and well below what analysts had expected. 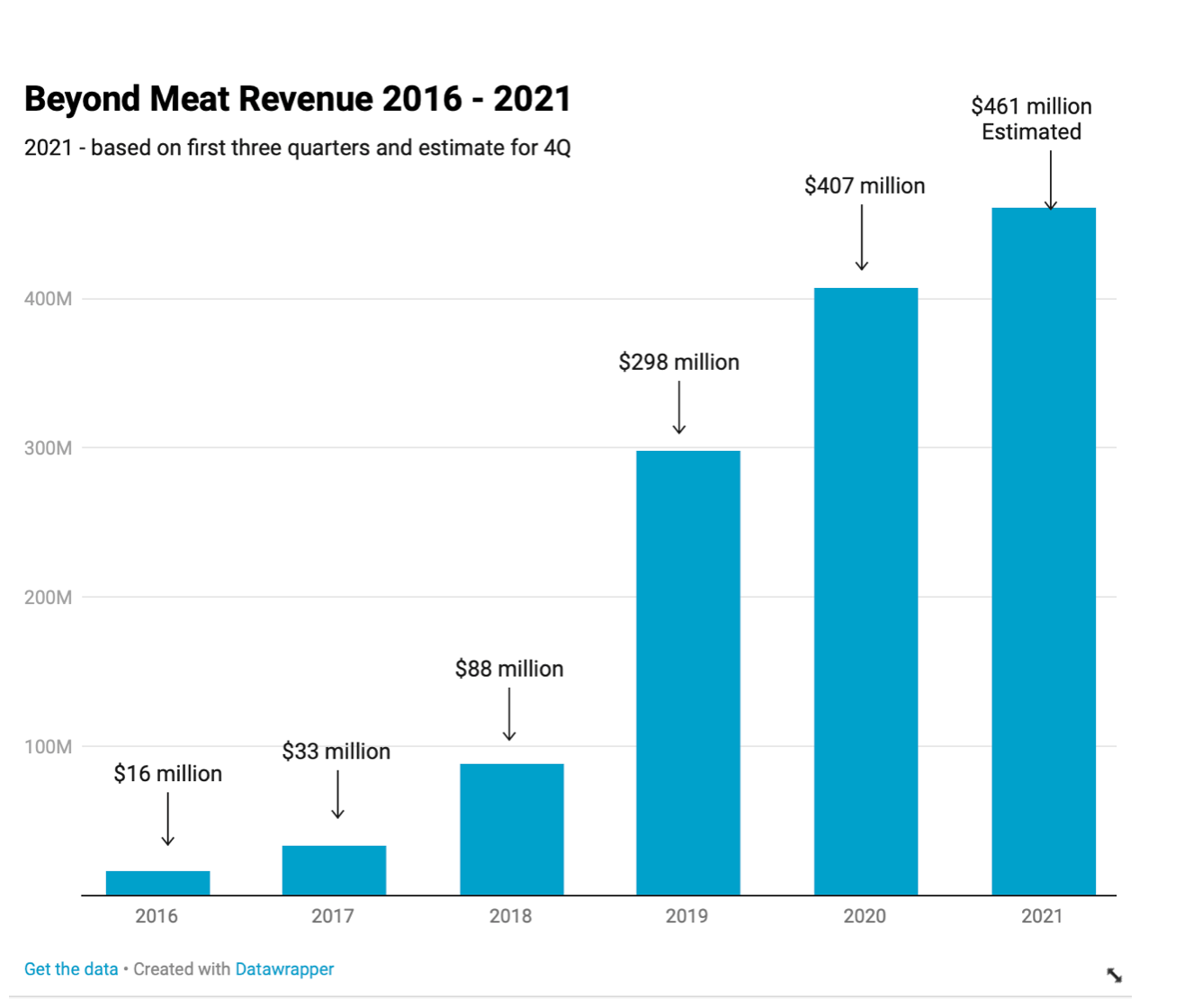 Despite increasing revenue and expansion in the U.S., Europe, and Asia, the company continues to see punishing losses due to high R&D expenses, operating costs, and declining demand.

Beyond Meat expects about $100 million dollars in losses in 2021, a punishing amount that could break the company if this trend continues.

“Beyond’s business is reaching market saturation faster than expected and that the company has deeper problems that won’t be easy to fix,” Credit Suisse analyst Robert Moskow wrote in a note. 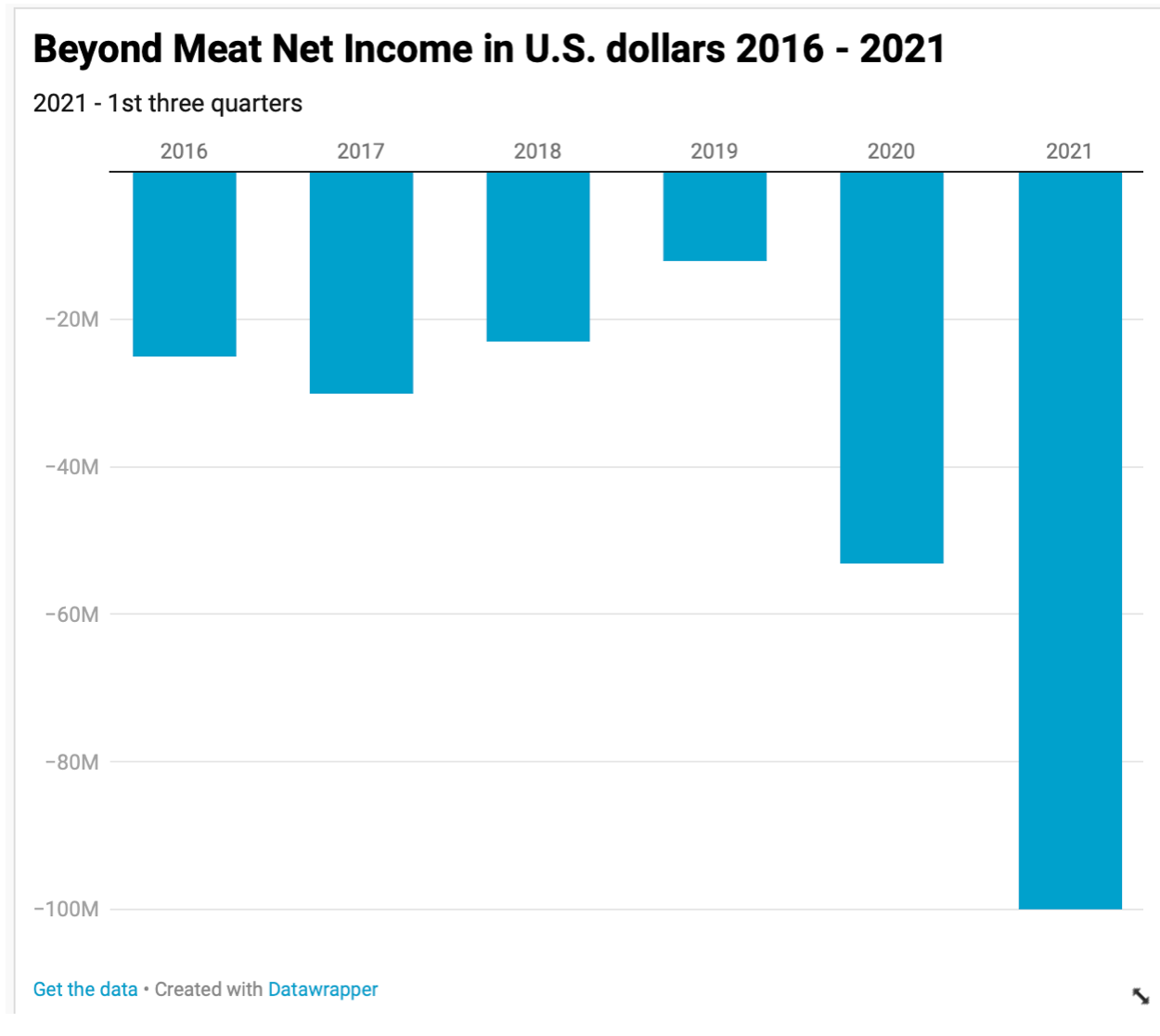 A ray of hope for the McDonald’s partnership was the announcement early this month that two long-term executives from Tyson foods with a combined 61 years experience at the food giant will join the Beyond Meat team. Doug Ramsey was in charge of the McDonald’s international business division at Tyson Foods and is now joining Beyond Meat as chief operating officer.  Bernie Adcock will be joining the company in a new position as Beyond Meat’s first chief supply chain officer.

These hires are not connected to the McDonald’s deal but Ramey’s experience especially should help things run smoothly between the two companies.

Tyson Foods was an early investor in Beyond Meat before the company went public, but later launched its own line of plant-based meat, Raised and Rooted.

Skilled and experienced executives won’t be able to save the company, however, if consumers don’t embrace the product.

The McDonald’s partnership could alienate some of Beyond Meat’s other customers, however. Some vegans aren’t thrilled that Beyond Meat is working with McDonald’s.

“I wouldn’t step foot in a McDonald’s.  I wouldn’t trust them., ” said Isabella Silva of Bloomfield NJ during an interview at the Plant Based World Expo.

Others had mixed feelings.

A retired McDonald’s executive, Bob Langert, formally VP of sustainability, explained in an interview that McDonald’s may want to move slowly since it’s had missteps with other plant-based burgers.

“McDonald’s is going to be very careful about a new product like this,” said Langert.  “When I was still with the company they tried a veggie burger in India and a few other countries and it didn’t work out.”

This October McDonald’s also announced its lofty goal of reaching net zero emissions by 2050.  More plant-based products could help them get there as a 2018 study by researchers at the University of Michigan concluded that a quarter-pound Beyond Burger generated 90 percent less greenhouse gas emissions than its beef burger equivalent.

So far things are looking positive for the McPlant. Based on franchisee checks, investment firm BTIG estimates that several of the eight locations are selling as many as 500 McPlant sandwiches a week, or roughly 70 per day. This is compared to BTIG’s initial projections of about 20 to 25 McPlant sandwich sales a day.

BTIG analyst Peter Saleh said in a research note December 13th that he expects the product to be in about 700 restaurants across several regions as a limited-time offer in February and March, with a national rollout possible in 2023.

Unlike the current test, the expansion would come with local and regional advertising funded by McDonald’s franchisees and possibly Beyond, Saleh said.

McDonald’s is a marketing powerhouse that could push the McPlant on a scale Beyond Meat couldn’t on its own. Last year the burger giant spent $1.62 billion on advertising in the U.S. In contrast, Beyond Meat didn’t run its first television ad until August 2020.

McDonald’s also has 39,000 locations worldwide. Loyal consumers who might not normally pick up a frozen plant-based burger at a supermarket might take the leap at a place like McDonald’s where the burger is already prepared and relatively inexpensive.

“I would totally try the McPlant burger,” said Adam Moleta, an exhibitor at the Plant Based World Expo who identified as flexitarian. “I think people will spend $5 to try it and if they don’t like it it’s no big deal.”

On the negative side, McDonald’s already test marketed a similar Beyond Meat burger called the P.L.T., or Plant Lettuce Tomato, in a select number of Canadian stores. The P.L.T. was pulled from stores after a six month trial in June 2020. Neither company gave much of a reason for why the new product was dropped, but the pandemic could have played a role.

Another bad omen was a recent failed test of Beyond Meat’s Carne Asada plant-based beef with its partner Taco Bell. The news of this failed test sent Twitter users into a fit of mocking both Beyond Meat and Taco Bell, as the chain is not known for high quality meat.

Still, some investors remain excited about the partnership.

“If Beyond Meat can just simply produce a cheaper, better product, the wholesale industry from McDonald’s to your school lunches, could be a much more massive market for them than just your regular Joe consumer, and I think that’s going to be the way forward for them,” said Boris Schlossberg, managing director of FX strategy at BK Asset Management, in a CNBC video about the company.