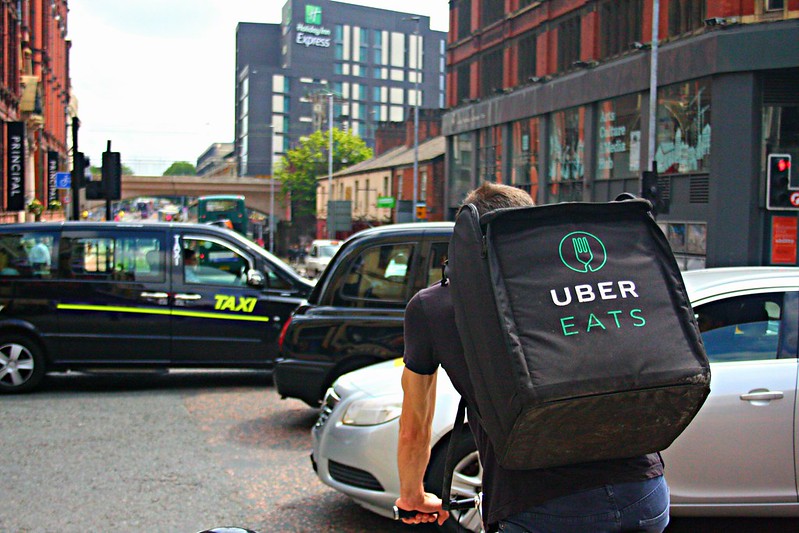 With five years experience as a gig driver, Kenneth Coghill has spent the last year and a half experimenting with supplementing his work driving customers where they want to go with delivering convenience items to homes and businesses.

But the Pennsylvania driver, who drives for Uber Technologies Inc. and other rideshare and delivery apps as his main source of income, isn’t sold on the idea that by doing so he will earn more money.

“Even if I could get in there to get stuff picked up quickly, if I can’t find what I’m looking for, it doesn’t work very well,” Coghill added. “Also, I can get stuck in line behind 15 other people in the drug store, so it strikes me as being a less good use of my time and resources than doing straight food delivery for restaurants.”

Uber has spent billions of dollars on acquisitions to expand its convenience delivery business. Those deals aren’t steering the company to profitability any time soon.

The Covid-19 pandemic supercharged Uber’s delivery business and helped cushion the financial blow from weaker demand for hailing rides. Now, to gain scale, Uber has to do more than sell the convenience of delivery to users, industry analysts say. It has to convince its drivers to embrace delivering more than restaurant orders, turn money-losing startups into lasting enterprises and overcome heavy competition from its rivals.

At the same time Uber is facing increasing pressure from investors to take firmer steps toward profitability. Uber has incurred about $22 billion in red ink since its inception and CEO Dara Khosrowshahi has sold off experimental endeavors, like the company’s flying car project, and operations in certain markets to lighten its operational expenses.

Uber’s purchases of companies like Careem, Cornershop, Postmates Inc., and Drizly were aimed at building up its business beyond ride-hailing and further into delivery everything from food to alcohol world-wide.Food-delivery services, like UberEats, have grown quickly in recent years, fueled by increasing consumer demand and an influx of cash from investors.

Before it started expanding with acquisitions, Uber’s primary vehicle for expanding delivery was launching UberEats in markets where it already operated. Then, things began to change.

Hoping to gain even more scale in the food delivery market, Uber sought to acquire competitor Postmates, another on-demand food delivery app in 2019 and finally made a deal in 2020, during a pandemic boom. The all-stock deal was worth $2.6 billion.

Uber’s latest acquisition of Drizly, a deal worth $1.1 billion in a mix of stock and cash, was another opportunity for Uber to expand into convenience delivery.

The magnitude and frequency of the acquisitions signals how important domestic growth is to Uber as it looks towards a post-pandemic era.

“Players are coming into the [delivery] market primarily for convenience or for fast items,” said Rick Watson, founder and CEO of RMW Commerce Consulting, a New York-based e-commerce consultancy. “What Uber is trying to do is ensure that, ‘how can we participate also in the grocery space so that we don’t get left behind.’” 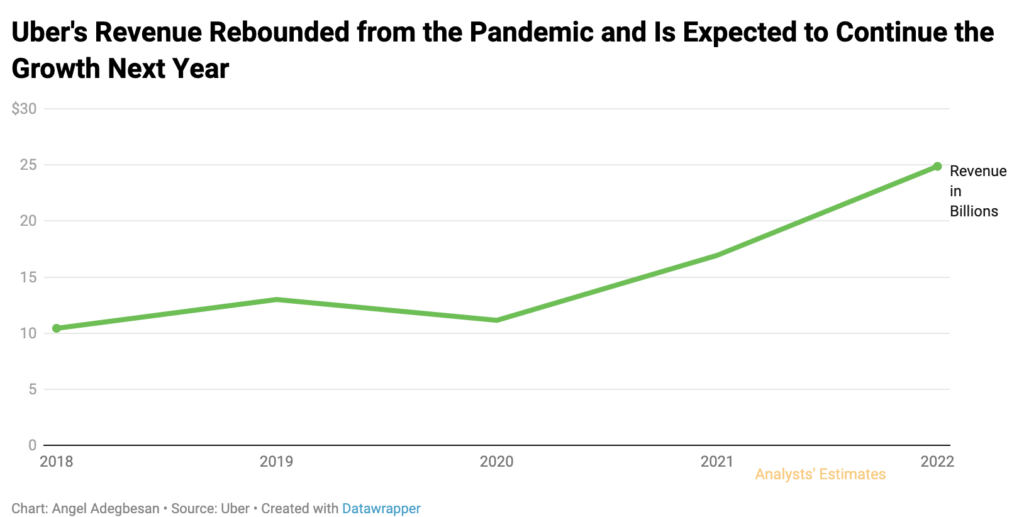 Uber’s revenue this year is expected to top $16 billion with analysts projecting another jump to $24 billion next year.

Boosted acquisitions and the gutting of experimental and unsustainable businesses, Uber’s revenue had grown by 25% from the previous year to $13 billion in 2019. While overall revenue in 2020 fell 14% from the prior year, revenue from the delivery business more than doubled to $3.9 billion.

Deliveries accounted for 56% of total bookings in the first nine months of 2021, a little bit up from the entire 2020 and more than double for the entire 2019.

“By broadening our global ordering and delivery offerings into grocery, convenience, alcohol, specialty goods, pet supplies, flowers and more, we’re leveraging the best of Uber to move what matters within hours if not minutes, to the benefit of consumers, local merchants and, of course, [drivers], with increased delivery opportunities,” said Raj Beri, Uber vice president and global head of grocery and new verticals in a recent interview with CO, a publication by the U.S. Chamber of Commerce. 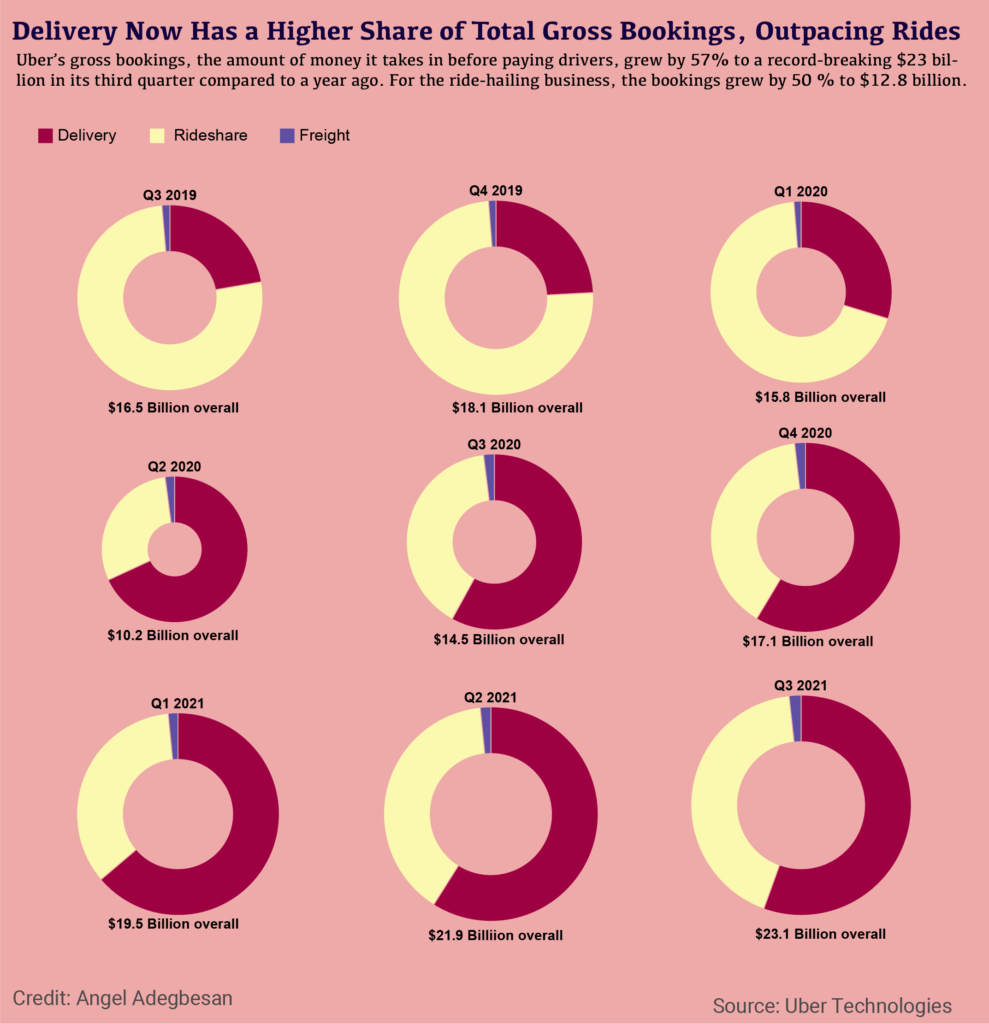 Uber faces intense competition from other companies like Gopuff and Instacart that are well established in the grocery delivery market. The company also faces competition from grocery chains like Amazon.com, Inc., Kroger Co., Target Corp. and Walmart Inc. that are investing heavily in online ordering and delivery for their customers.

Uber is already well established in the restaurant delivery market, controlling 27% of U.S. consumers’ meal delivery sales in November 2021, behind DoorDash Inc.’s 57%, according to Bloomberg Second Measure, a technology company that analyzes purchases and consumer behavior.

However, Instacart currently holds the largest share of the online grocery pickup and delivery market, taking in 63% of the market as of July 2021, according to Edison Trends, a research firm that tracks consumer behavior. Companies like Uber, DoorDash and Just Eat Takeaway.com N.V., which owns Grubhub, only have 3% of the share, combined. 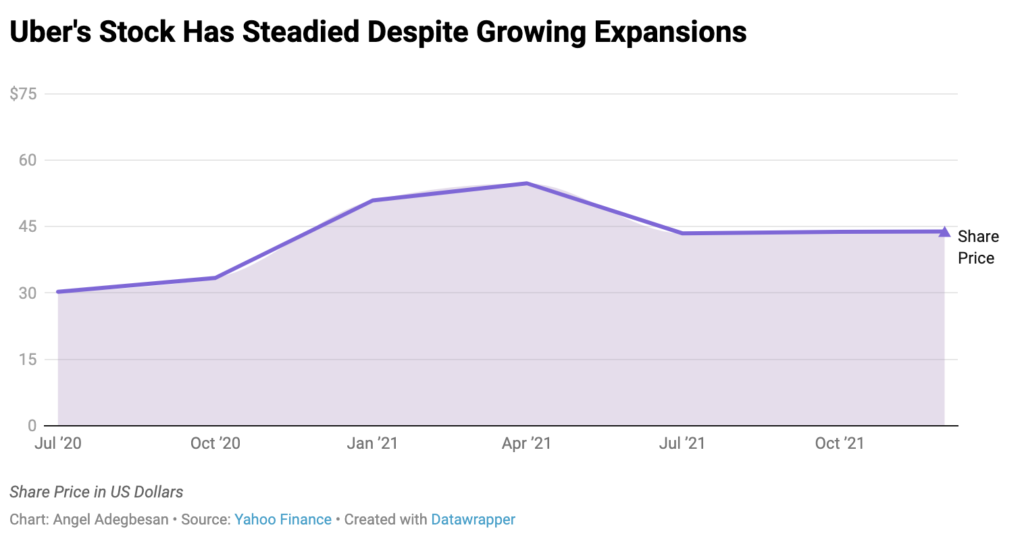 Competition aside, Uber also encounters the main challenge of turning a profit through these acquisitions. Uber has only acquired private companies so far, which makes it difficult to determine their profit levels before the acquisition. The companies Uber has acquired are awash in red ink, analysts believe, and Uber’s plan to make them profitable is unclear.

“If they think they can just acquire enough users and make money reselling someone else’s product, that is very hard to make profitable,” said Watson.

Although Uber has yet to turn a net profit, it has managed to trim net losses in recent years and analysts project the company will have a net loss of $1.2 billion in 2022, down from a loss of $6.7 billion in 2020. 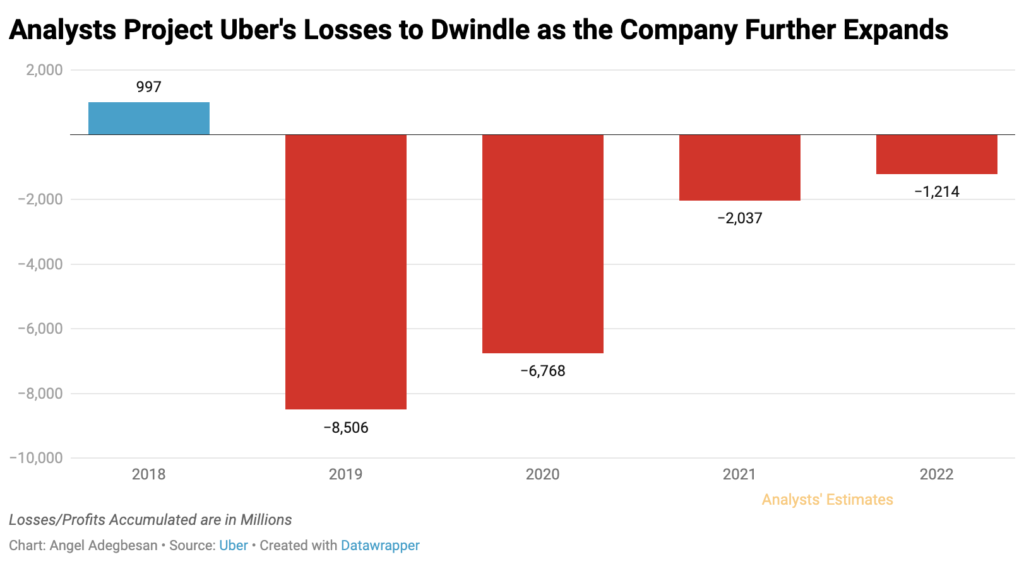 Some experts say the company encounters the challenge of reeling in profits because it has trouble focusing on the right area.

“I think that Uber is just spread a little bit too thin because of expensive acquisitions on the delivery side kind of at the expense of the transportation side,” said Christine Russo, founder of Retail Creative and Consulting Agency. “We haven’t seen [profits] reflected in their quarterly reports and it remains to be seen if we’ll ever see [profits] from those acquisitions.”

Avi Rachlin, a New Jersey resident who has been an UberEats driver for over two years, is also skeptical of the company’s strategy. Although the 20-year-old college student has had increased opportunities to take more orders and increase earnings in the past two years, he still finds shopping for convenience delivery inconvenient.

“It can be a little difficult because they don’t tell you where the items are in the store,” Rachlin said about shopping for his deliveries.To him, Instacart does it better because it provides the location for items while shopping.

As Uber continues in its expansion in a crowded marketplace, its survival hinges on consumer habits and preferences in the future.

“Many people, a good fraction of the time, like the idea of having certain convenience for their food consumption and they are willing to pay a little bit above and beyond the actual cost of the product itself, so I do think the outlook is decent,” said James Tenser, president of VSN Media LLC, a consulting agency.