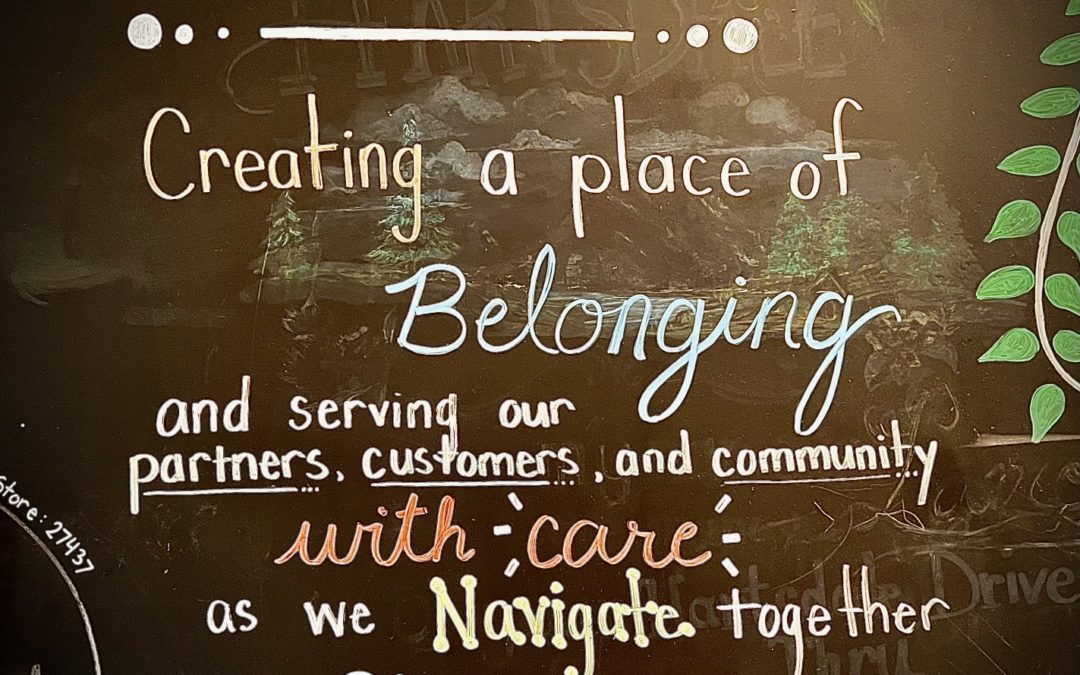 Starbucks Corp. (SBUX) is raising its U.S  minimum wage to $15 an hour in an effort to remain competitive with retail peers like Walmart Inc. (WMT) and Target Corporation (TGT).

But six weeks after the October announcement, employees at one Buffalo, N.Y. store voted to form the first union amongst its corporate-owned and operated stores. The move was a stark blow to Starbucks, which has historically prided itself on a well maintained relationship with its employees. Starbucks Workers United, the group behind the union push, has since pledged to organize more workers to expand its reach.

Convincing a more selective workforce to choose its stores is proving difficult for Starbucks, even though it posted record revenue in 2021 following a pandemic-induced lull in 2020.

Starbucks often refers to its employees as “partners,” and regularly speaks of their importance and role in Starbucks’ bigger plan for growth and prosperity.

Investors have already expressed worry over Starbucks’ big spending on wages. Starbucks plans to spend upwards of $1 billion on wages into 2022 to address staffing shortages. The company still lacks a long-term plan to address the union push, which workers say has more to do with the culture at Starbucks stores as opposed to pay and benefits.

Investors also have expressed concern that Starbucks’ investments could temper profits, as the company has said its spending on employee pay hikes into 2022 – coupled with two recent increases – total about $1 billion. Starbucks are up a modest 9% over the past year, compared with a 28% gain in the S&P 500. 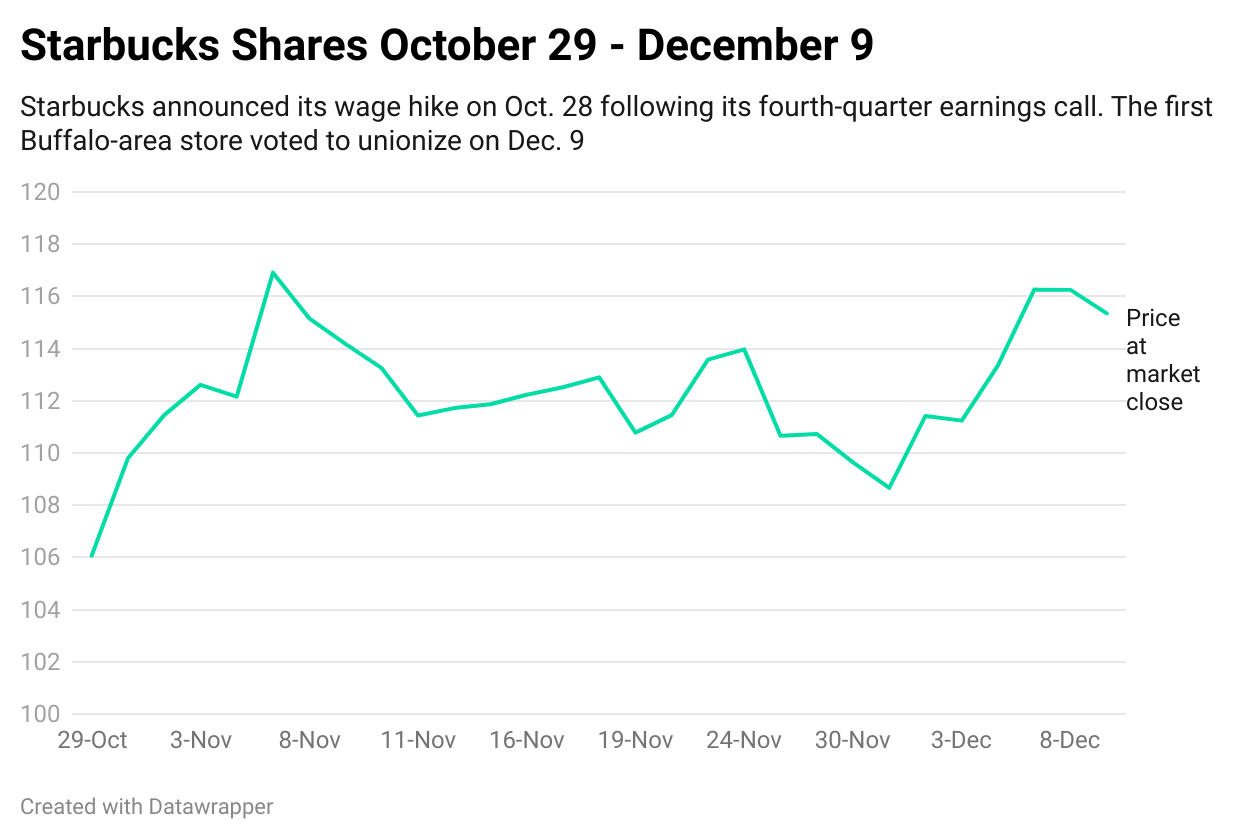 Starbucks ‘ trouble with hiring despite more planned wage hikes  in 2022 shows just how deep factions throughout the industry have grown since the onset of the pandemic. Workers remain wary to return back to full-time work, and growing incentives have done little to change their minds.

“We often think of Starbucks as exceptional, but it really operates rather typically,” said Bryant Simon, a professor at Temple University. “The analogy is [that] the front of the store looks really different from McDonald’s, but behind the counter it’s the same.”

Colin Cochrane, a Starbucks employee in Buffalo and representative with Starbucks Workers United who voted to unionize, said employees want the company to expand beyond its current commitments to include things like fairer scheduling and credit-card tipping. He said the quality of life for workers behind the counter has declined over the years, falling further during the pandemic as customers became more irritated and eager to dine in stores.

“I make just over $16 per hour, and there are a lot of other high-volume food service jobs in the area hiring at $17 or $18 per hour right now,” Cochrane said. “The health plan has gotten increasingly expensive and most people who use it struggle to pay for it.”

Starbucks set itself apart from peers in the industry under the leadership of Howard Schultz, who extended full health benefits to part-time employees and offered a stock-option program that included part-timers in the late 1980’s and early 1990s. But workers like Cochrane who support unionization say the Seattle-based company has strayed far from those days.

Starbucks executives have only offered modest responses to employee grievances. In an earnings conference call with analysts, the day after announcing its biggest employee investments to date, executives avoided addressing the Buffalo union effort. After the single-store vote in Buffalo, CEO Kevin Johnson said the company would respect the outcome of them.

Roughly 61% of Starbucks’ 383,000 employees as of Oct. 3 worked in U.S. company-operated stores. The performance of those stores helped Starbucks climb to record revenue of $29.1 billion in fiscal year 2021, up 24% from 2020 – a year that disrupted a more than decade-long streak of year over year revenue growth. Analysts project $32.5 billion in revenue for fiscal year 2022, marking a potential 12% increase from 2021.

But a lack of talent behind the counter could harm the company’s growth prospects. Of the company’s 2,000 net new stores it plans to open in the current fiscal year, about 400 of those would be U.S.-based according to Starbucks financial chief Rachel Ruggeri. 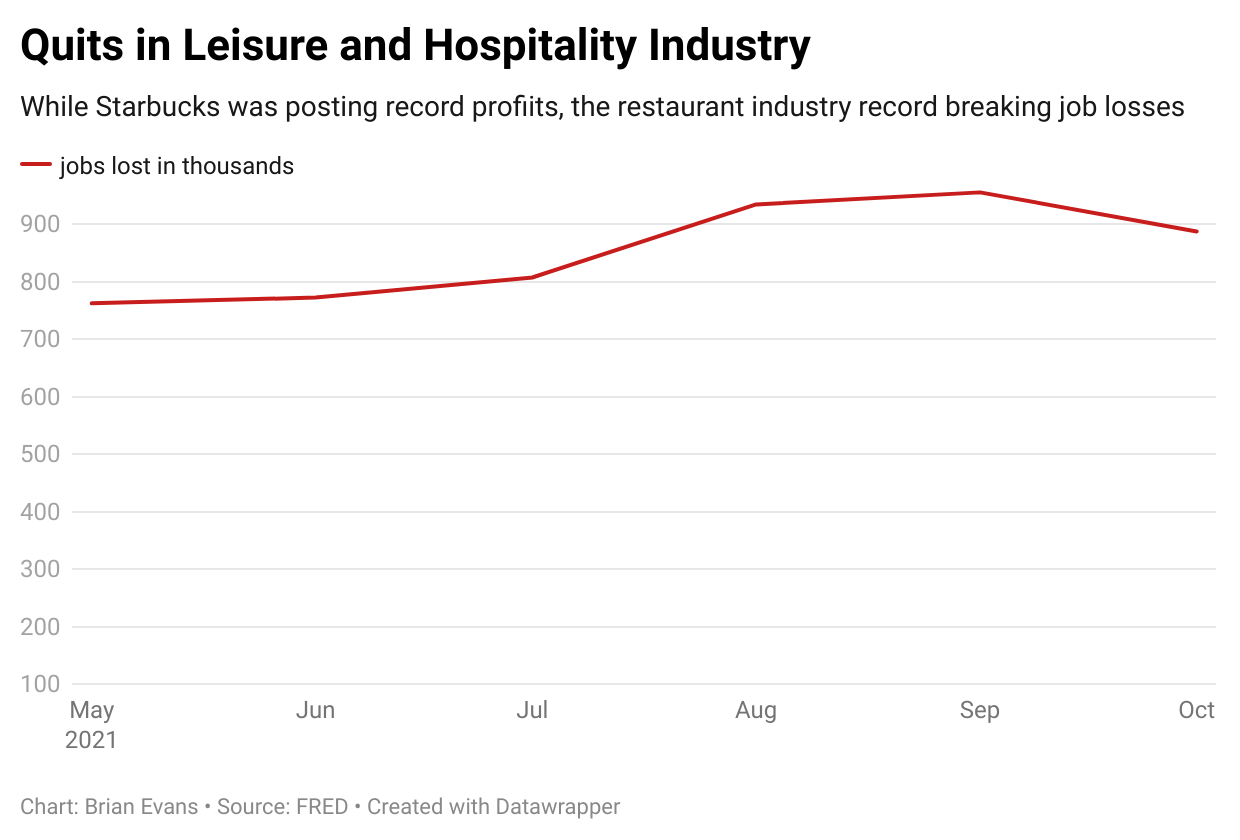 “The union push at Starbucks is surprising because of the company’s history and it likely presages changes elsewhere in the industry,” said Sean Dunlop, equity analyst at Morningstar.

However, he said the effect of unionization votes and prospects for immediate change in the company’s posture and operations will likely be limited.

“While the store-by-store approach renders traction more attainable for union proponents, it curtails the rapidity with which sweeping changes can be made across a footprint of nearly 9,000 company-owned stores and 6,500 licensed stores in the United States,” he said in a report.