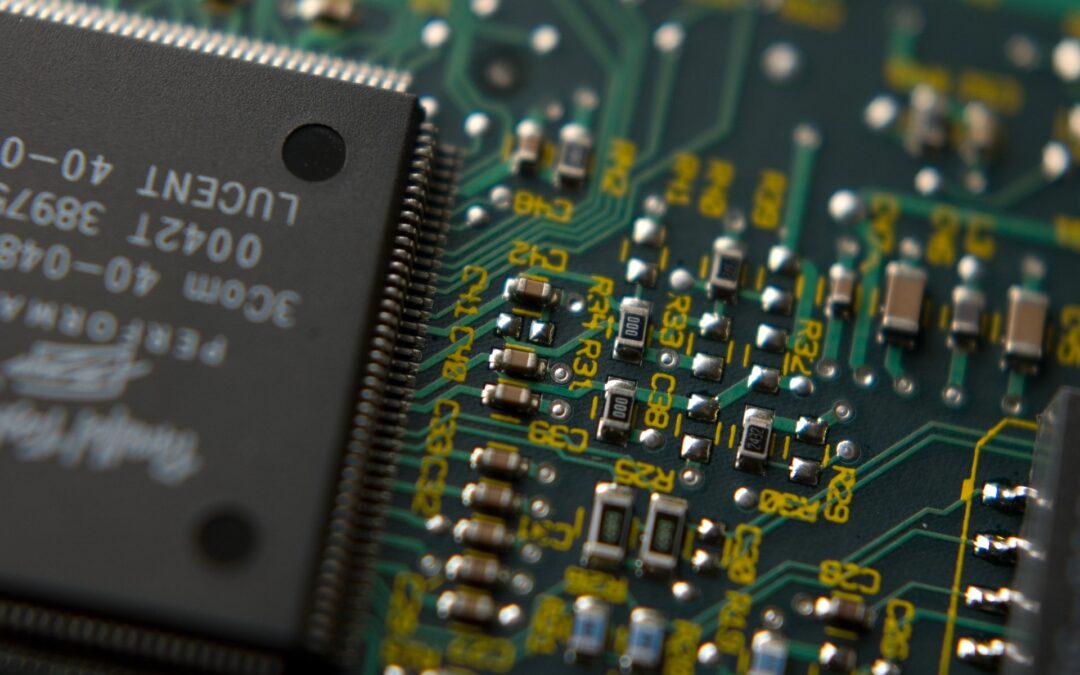 Despite billions of dollars for chip plants built in the U.S. and a lucrative tax credit, investor demand for semiconductor stocks has short circuited amid the CHIPS and Science Act.

Nvidia (NVDA) has been hit hardest, down 55% on the year, after closing Friday at $131.98. The price of Advanced Micro Devices (AMD) has fallen nearly 47% to $76.51 during the same period. Intel Corporation (INTC) had outperformed the Nasdaq until late July but has since slipped to $29.24, 43% lower year-to-date. 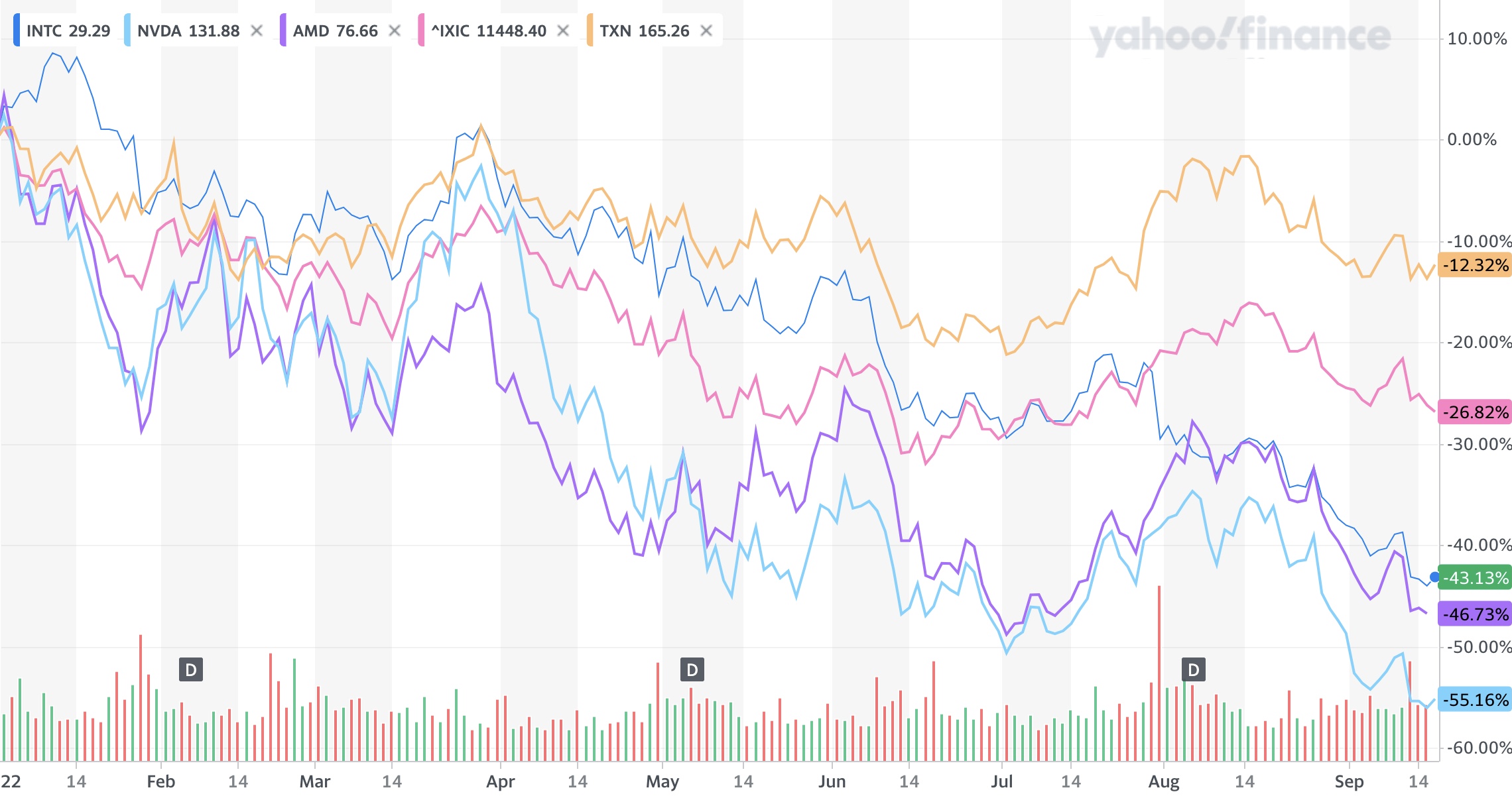 Microchip manufacturers have taken a beating this year, according to Yahoo Finance.

The overall performance of semiconductor stocks reflects a drastic swing in supply and demand. Because of the COVID-19 pandemic, companies ramped up production, as supply chain snarls and increased spending on goods led to a global shortage of computer chips. But now consumer demand is fading quickly due to inflation and high interest rates, leaving some businesses with inventories of chips that will become outdated as more advanced ones are released.

“Because of the shortage, everybody double-ordered, so we have a huge, huge excess that we need to correct,” said Kinngai Chan, a senior research analyst at Summits Insights. Referencing chipmakers’ revenues, he said, “The growth that they have seen in the past two years was not real – it was a mirage.”

In late August, Nvidia reported a 19% drop in revenue for the second fiscal quarter compared with the first three months of the year, to $6.7 billion from $8.2 billion. Its revenue from gaming GPUs also fell 44% during that period, and the company forecast further declines as its retail partners seek to “reduce inventory levels to align with current levels of demand.”

On the same day the CHIPS and Science Act was passed by Congress, Intel reported $15.3 billion in revenue for the second fiscal quarter, 15% below its original guidance. Intel CEO Pat Gelsinger attributed the underperformance to a “sudden and rapid decline in economic activity.”

Intel plans to build a $20 billion chip manufacturing complex in New Albany, Ohio, but its CFO, David Zinsner, said the company doesn’t expect to start receiving government funding for the project until next year. And any increase in production remains far out on the horizon, as the facility isn’t projected to be complete until 2025.

“Certain U.S. companies have benefited, to some extent, from the idea that maybe their capital costs would be lower than anticipated moving forward,” said Matthew Bryson, managing director of equity research at Wedbush Securities. “Generally, that’s been outweighed by the difficult macro conditions and expectations that things get more difficult.”

Shares of Texas Instruments (TXN) have fallen only 12.3% this year, closing Friday at $165.26. The company has emerged as one of the industry’s lone stars in a bear market because of its longer-lasting products and less exposure to diminished consumer demand. In Sherman, Texas, TI is building a new plant with funds from the CHIPS and Science act too, which is also expected to go online in 2025.

Because two thirds of TI’s revenue comes from automotive and industrial markets, one analyst said that makes it less vulnerable to a steep drop-off in discretionary purchases compared to producers of high-end chips for PCs, smartphones, and gaming consoles.

“Many of those products don’t have a long life – they may live one or two product cycles and then be obsolete – so TI can fill its inventories with products that may last a decade or more,” said The Benchmark Company analyst Cody Acree. “You don’t need to upgrade to get faster windows or better automatic seats with every generation of car.”

Semiconductor stocks could face more trouble ahead if inflation remains stubborn, policy moves from central banks prove overly aggressive, or a slowdown in the world’s largest economies leads to a prolonged recession.

A warning was issued by technology research and consulting firm Gartner when it revised its 2022 outlook for the global semiconductor market, projecting revenue growth of 7.4% this year instead of 13.6%. After revenues increased 26.3% last year, Gartner said the industry is “entering a period of weakness” and expects they will decline 2.5% in 2023.

The unfavorable outlook has left some individuals wishing they had sold their shares at a time when demand was more robust. Ryan Cronin, 23, bought shares of AMD in October of 2020 for around $81 and watched them climb as high as $164 in November of 2021. He is now down 5.5% on his $20,000 investment.

Shares of AMD are down 2.1% over the past two years, according to Yahoo Finance.

Cronin invested in AMD over Intel or Nvidia because he views the company as more diversified than its main competitors. While Intel produces mostly CPUs and Nvidia focusses on GPUs, AMD makes both PC components and is prioritizing products used in data centers.

“Sometimes you should just take your wins,” he said. “But when you take into account everything that’s happened with the market lately, it’s really not that bad.”