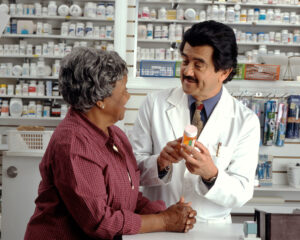 Federal legislative overhaul of the healthcare sector is throwing a wrench into Big Pharma’s growth this fall, but companies are expected to weather the storm in a market hungry for new drug therapies.

Analysts say that pharmaceutical companies, whose future depends on a stream of new products, are well-positioned despite market oscillations and federal regulation.

“Investment in the [pharmaceutical] industry will continue despite the turbulence” in the overall market, said Mayank Mamtani, head of healthcare research at B. Riley Securities. “Clearly the science is there to deliver on issues that are unpredictable, like Covid, or predictable, like obesity or diabetes.”

One of the largest restructurings of the U.S. healthcare system, the Inflation Reduction Act will cap drug price increases to the inflation rate and allow Medicare to negotiate the prices of certain costly drugs. The law’s redesign of Medicare Part D locks in out-of-pocket monthly supplies of insulin for those patients at $35—a huge win for the more than seven million daily insulin users in the U.S.

But analysts expect defensive stocks like pharmaceuticals to flourish amid growing investor concern of a possible recession. The frontrunner of the pack of three, insulin giant Eli Lilly is now expanding beyond the diabetes market. Earlier this spring executives announced a trial of its new weight loss saw 63% of participants lose a fifth of their body weight. Dr. Louis J. Aronne, an obesity expert at NewYork-Presbyterian/Weill Cornell Medical Center, called the Tirzepatide trial “an important step forward” in obesity treatment. 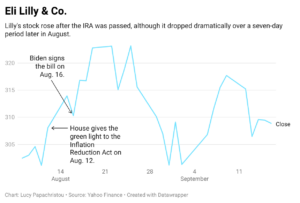 “What’s really important for Lilly is not so much the guidance for this year,” said Damien Conover, director of healthcare equity research for Morningstar Research Services LLC. “It’s the longer term, and Lilly is incredibly well-positioned for growth.”

While Lilly is expanding, Type 1 diabetics like Desha Williams are still struggling to pay for their daily insulin. The $400 Williams shells out every month for her Novo Nordisk-brand insulin, the injection needles, and testing strips is a considerable chunk of her $28,000 annual salary as a travel consultant in North Las Vegas. A change in her insurance coverage forced Williams to switch from Lilly’s Humalog to Novo Nordisk’s Novolog.

“I can’t do certain things in my life because of the price point that companies choose, and they get to choose it based on criteria that doesn’t immediately involve me,” said Williams, 22, who was diagnosed with diabetes when she was eight years old. “It’s ridiculous.”

The two foreign companies Novo Nordisk and Sanofi are struggling more this quarter due to legal challenges. The Danish manufacturer paid $6.3 million earlier this month to settle allegations from the Department of Justice that it had violated the Trade Agreements Act by selling injection needles to the government produced in “non designated countries.” 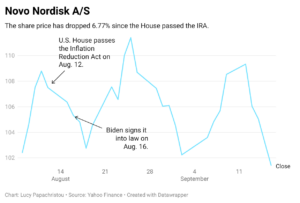 But that same week Novo Nordisk announced it would shell out $1.1 billion to acquire Forma Therapeutics, a clinical-stage biopharma company developing treatment for sickle-cell disease.

Sanofi’s price is declining due to lawsuits alleging its once-popular heartburn drug Zantac may cause cancer. Sanofi, GSK Plc and Haleon Plc, three companies involved in the litigation, lost a combined $40 billion in market value over a few days in August after analysts released a series of alarming notes about the companies’ exposure. 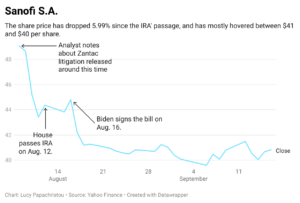 But pharmaceutical giants are used to enduring tough legal battles, said Conover, pointing to Johnson & Johnson’s talc baby powder and Merck’s Vioxx, both of which spawned lengthy lawsuits and cost the companies millions or even billions of dollars, in the case of the latter. Both those companies have since recovered, he noted.

“If you think about the pharmaceutical industry, usually every two to three years a firm gets hit with some litigation that disproportionately hits their stock price,” Conover said. “And then it [the stock price] comes back. I think the same thing will happen with Sanofi and GSK.”