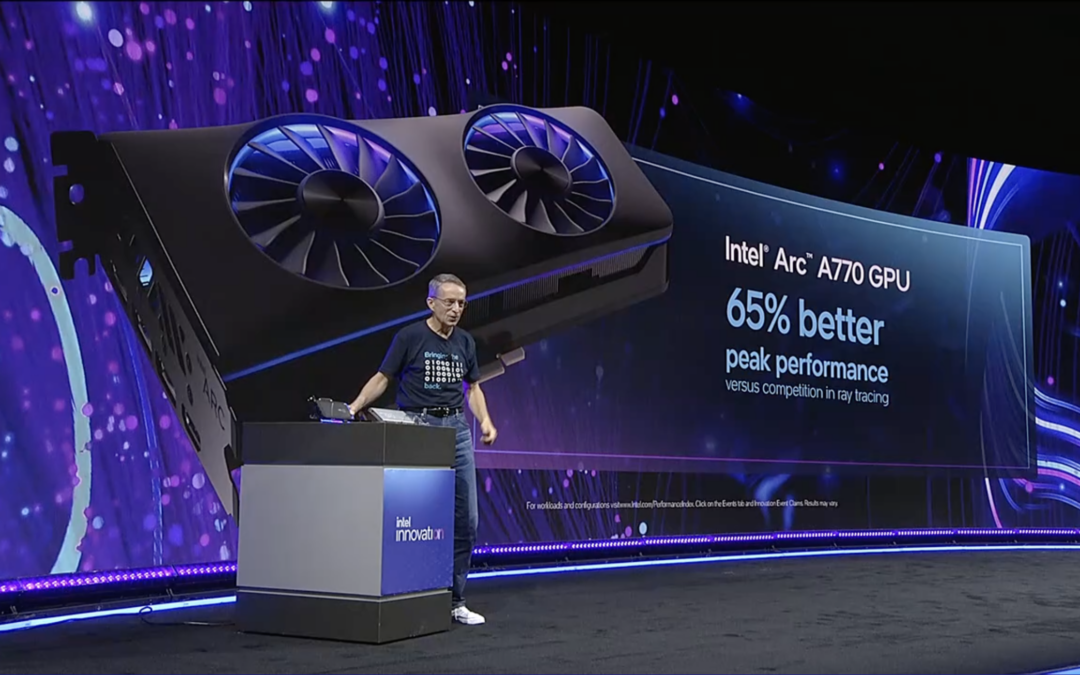 Intel Corp. said Tuesday its new graphics card for gaming computers will launch next month, squaring up to compete with Advanced Micro Devices Inc. and Nvidia Corp. on rival turf.

Intel’s area of expertise has long been the production central processing units, which serve as the main chip powering a PC. But starting Oct. 12, the company will begin offering parts that specialize in rendering graphics, an area of the chip market that’s become a lucrative business for Nvidia and AMD.

High-end graphics processors, often one of the most expensive components in a custom-built PC, are used to run video games, mine cryptocurrencies, and conduct machine learning. The average price of these products has climbed in recent years, as some companies prioritize performance over affordability. This trend has created an opportunity for Intel to step in and deliver on value, according to company Chief Executive Patrick Gelsinger.

“They’ve just gotten super expensive, and we don’t think they need to,” Gelsinger said at Intel’s annual conference Tuesday. “You should be frustrated because you are losing out as the gaming community, and today we’re fixing that.”

Intel’s Arc A770 graphics cards will have a starting price point of $329, a far cry from what its competitors are charging on new products. Earlier this month, Nvidia announced its GeForce RTX 4080 graphics cards will be at least $899 when released in November and some of its more complex units already sell for more than $2,000 at retail stores.

The last time Intel tried to make a graphics card for consumer PCs was over a decade ago, and the project was ultimately scrapped before it hit shelves because of development issues. After deciding to focus on its profitable CPU business, the company is trying to make up for lost time, according to Jim Feldhan, president of Semico Research.

“Intel is in a catch-up mode,” he said. “I think they just didn’t internalize how big the GPU market could be.”

The company’s stock price saw a slight rally heading into the conference but ultimately fell 1.9% and closed Tuesday at $26.88. Other products were also revealed, including a new generation of central processing units and graphics cards designed specifically for data centers.

While there’s a chance Intel’s new offering won’t outperform top-of-the-line cards from Nvidia and AMD, pricing its products competitively is a vital part of the company’s corporate strategy, according to Jim Kelleher, director of research and senior technology analyst at Argus Research.

“Intel has shown in the past that it’s willing to price aggressively to keep sockets in PCs,” he said. “Now it’s trying to win sockets in gaming PCs.”

Demand for PC parts was robust at the height of the pandemic, as people spent more on goods and stayed at home, but rising interest rates and inflation are eroding consumer demand. Nvidia saw a 44% drop in revenue on gaming in its second fiscal quarter and forecast further declines this year.

Intel had planned on releasing its new graphics card earlier this year but delayed the product’s launch in May, citing software development issues and supply chain disruptions. That hasn’t pleased investors and could also impact sales, according to Kelleher.

“Their timing is poor because consumers are kind of strapped with inflation,” he said, adding that Intel’s inability to launch products on time “is the reason the stock has suffered so greatly in the past few years.”