Netflix To Focus On Profits Amid Slowing Subscriber Growth 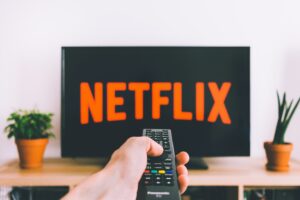 Following two consecutive quarters of subscriber losses, Netflix is growing again. But this time the streaming giant is anchoring its future on expanding profits, not subscribers, according to a shareholder letter released with its third-quarter earnings.

Netflix said it will no longer share projections on subscriber additions per quarter in Tuesday’s letter. The move comes as the company said it would launch an ad-supported service tier in early November and crack down on password sharing starting next year.

The company hopes its burgeoning advertising business as well as its “paid-sharing” function will become important revenue streams going into 2023, making its membership counts less of a priority. This is a major shift in the company’s narrative, which for years touted its ability to offer unlimited, ad-free entertainment.

“We’re quite confident in the long term that this will lead to a significant incremental revenue and profit stream,” said Greg Peters, Netflix’s Chief Operating Officer, on a conference call with analysts. 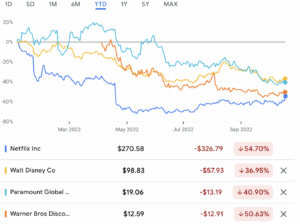 Netflix added 2.41 million subscribers in the quarter ended Sept. 30, exceeding internal projections by over one million. The streaming giant also beat Wall Street projections and brought in $1.4 billion in profit, compared with the $960 million forecasted for the quarter. The company’s earnings per share reached $3.10, beating the $2.14 estimate.

Investors welcomed the company’s better-than-expected earnings. Netflix’s shares shot up 12% on Wednesday. The stock remains down 54% year to date, a steeper decline than the S&P 500 and some of its streaming competitors.

“Nobody cares if [Netflix] grows 5% a year or 20% a year if they aren’t profitable,” Michael Pachter, analyst at Wedbush Securities, wrote in an email, about Netflix. “If they can grow profits, they are a more compelling investment.”

Netflix’s focus on profits could also be a differentiating factor from its fierce competition in streaming, including Disney+, HBO Max, and Paramount+, which either already have ad-supported streaming options, or intend to launch them soon. In its shareholder letter, the company said it estimates its competitors are losing money on streaming, with annual aggregate operating losses totaling over $10 billion, compared with Netflix’s $5 to $6 billion annual operatingprofit.

However, there may be limits to Netflix’s reliance on cheaper prices for revenue growth and its ad supported tier is already being met with skepticism.

“My worry about the ad-supported tier is you might get too many current $15.50-a-month subscribers churning down to the $7 ad-supported package,” Jeffrey Wlodarczak, an analyst at Pivotal Research, wrote in an email. According to Wlodarczak, Netflix’s ARPU, or average revenue per user, could decline over time.

Additionally, the company’s profits as they stand now aren’t looking very rosy, either. Netflix posted its lowest quarter growth rate in its history. The company grew its revenue only 5.9% from the quarter prior, compared to a 16.3% growth in the same quarter last year. Weak foreign exchange rates and increased price sensitivity due to inflation are also denting the company’s gains.

Though Netflix is changing some elements of its offerings and building an advertising product from scratch, executives said that some of the company’s elements won’t change. Netflix will continue to follow its binge-release strategy, invest in content that performs well, and limit theatrical releases of its original movies, while limiting its reliance on other licensed content.