Disney is building a personalized metaverse experience ‘not for people that look like you, but for you’ 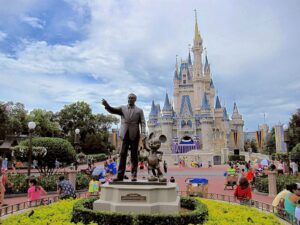 The Walt Disney Company is investing heavily in its Disney+ app in an effort to create a customized and personalized metaverse that merges the physical experiences of its parks with its digital entertainment.

As the company emerges from the pandemic years that shuttered its theme parks and halted film production and sports programming, Disney is looking to differentiate itself from competitors like Netflix and Discovery+.

“We have ambition to use Disney+ way beyond just a movie service,” Bob Chapek, Disney’s chief executive, said in an interview at WSJ Tech Live in Laguna Beach, Calif. on Wednesday. “It’s about customizing and personalizing our products and experiences to cater to what individuals want, as opposed to sort of looking at them in mass and trying to program that way.”

Chapek has expressed a strong interest in bringing Disney into the metaverse before, calling the initiative a “third dimension of the canvas” for Disney creators in a CNBC interview in February. On Wednesday, Chapek said the company was still “putting the arms and legs” on the new Disney+ app experience, and did not announce a timeline.

He said the company is trying to build a “toolbox of utilities” that its creators at Pixar, Marvel and other production houses can utilize to create unique experiences for customers both in Disney theme parks and on screens.

“When you’re in a park, we should know what your viewing habits are on Disney+,” Chapek said. “If people love pirates, then there’s demand for more pirates,” he added, explaining how a customer who watched a film in the Pirates of the Caribbean franchise could expect the app to guide them to pirate-themed rides at a Disney park.

Revenue from theme parks and products has seen a strong recovery driven by American consumers, notching gains of 70% in this summer third quarter from the same period a year ago.

“We’re seeing the shift back from merchandise to memories,” Ivan Feinseth, chief investment officer at Tigress Financial Partners LLC, said. “Coming out of the pandemic, people realize the importance of traveling with family and visiting people you haven’t seen for a long time.”

Disney is striving to come up with new ways to monetize audiences’ enduring love for its timeless characters and films. A powerhouse of content, the company “gets multiple bites of the apple when they spend on content,” Feinseth said, “because they own all of their own content, unlike Netflix.”

Disney is one of the companies best-positioned to create content specifically for the metaverse, he said.

As recessionary fears grow on Wall Street, analysts fear advertising growth is slowing, which could eat into Disney+’s profits. MoffettNathanson analysts expect advertising increases for services like Disney+ to get smaller quarter after quarter this year.

A recession could also drive cord-cutting as consumers look for ways to save. “It’s simple for a household to click a button and drop Disney+,” said Seth Shafer, Senior Research Analyst, TMT at S&P Global Market Intelligence. “You’re right in the middle of pocketbook decisions.”