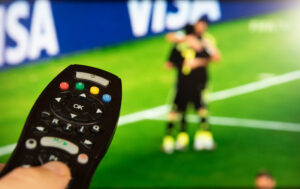 Mass media giant Fox Corp. is poised to see boosts in revenue this quarter, buoyed by record political advertising spending ahead of the U.S. midterm elections and a busy fall sports lineup.

Fox is expected to post gains at a time when Wall Street is worried about slowing advertising growth ahead of a widely-anticipated recession. Privacy changes Apple Inc. instituted last year affecting how users are tracked online have roiled the digital advertising market. Social media companies like Meta Platforms, Inc. and Snap Inc., both of which rely heavily on advertising to turn a profit, saw declines in their latest quarterly reports. Fox, which makes most of its money on live cable news and sports programming, has largely been spared the effects of the changes.

“[Fox] has such a big year of events coming up in fiscal 2023,” Doug Arthur, managing director at Huber Research Partners LLC, said, citing the November elections, the FIFA World Cup, and the Super Bowl in February. “They’re going to have record levels for a midterm, regardless of what’s going on with the economy,” he said.

Shares of Fox have fallen 20.63% year-to-date, plunging in mid-October at the news that Rupert Murdoch was considering reuniting the two parts of his media empire, Fox and News Corp, which split into two companies in 2013. Fox shares ended at $27.20 at market close on Monday. U.S. stocks fell Monday, with the S&P 500 index down 0.7%, but the month of October ended with all three major indexes higher.

Analysts expect Fox’s revenue, which is generated mostly from advertising and affiliate fees, to reach $3.17 billion for the three months ending Sept. 30, up from $3.05 billion in the first quarter of 2021. Fox is raising prices for its advertisers and affiliate fees, leading to 14% and 2% growth in those metrics the last quarter, respectively. Fox will release its quarterly report on Nov. 1. 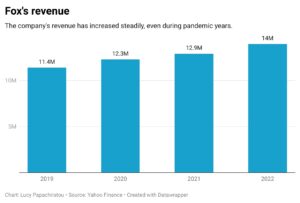 Analysts will be eyeing the rate of cable subscription declines, which was slightly elevated last quarter. Fox relies on subscriptions to its live news channels, sports networks, and entertainment programming for revenue, with sports and news delivering over two-thirds of the company’s ad dollars. Roughly a third of Fox’s cable agreement contracts are up over the next year. “Obviously they’re going to look for double-digit price increases, but if they’re losing 5-6% of their subs,” the affiliate fee revenue could take a hit, Arthur said.

But analysts expect sports broadcasters in particular to be spared any pullback from advertisers who have grown skittish over a recession. “[Sports broadcasters] will continue to see solid demand despite the challenging macro backdrop because, you know, advertisers still need to advertise,” Kutgun Maral, an equity research analyst at RBC Markets, said.

Fox’s streaming service, Tubi, which it acquired in 2020, has exploded in growth over the past year and added more films and TV shows to its catalog. But the issues with ad-tracking that also affected Snap and Meta may cut into Tubi’s revenue. A recent note by MoffettNathanson noted that “[Streaming] tends to be one of the first to go” when advertisers trim budgets.

The midterm elections on Nov. 8 are expected to provide a boost that should offset a possible slowdown in Tubi. “We are seeing an unprecedented wave of political advertising spending,” Lachlan Murdoch, Fox’s chief executive, said on the company’s fourth–quarter earnings call in August. Those revenues were “roughly three times larger” last quarter than in the quarter preceding the 2020 presidential election, itself a company record, Murdoch said.

Fox boasted strong sales this year in its upfront advertising market, where TV advertising slots are bought and sold months in advance. The company sold approximately 15% more advertising time than it did in the previous year, and announced in September it had nearly sold out of Super Bowl advertising.

Fox is forecasted to post $633 million in profit this quarter, down from $708 million in the same period a year ago but a 4.11% increase from last quarter. Diluted earnings per share are expected to reach $1.12 in the first quarter. Fox said it will buy back $4 billion of its shares, and has repurchased $2.65 billion as of last quarter.