With two drugs on the market, Axsome Therapeutics Inc.’s focus on making them revenue generators

Axsome Therapeutics Inc. has two central nervous system products on the market that have the industry buzzing around the small biotech company.

The drugs Sunosi, a product that promotes wakefulness in patients with sleep apnea, and Auvelity, a fast-acting novel antidepressant for people with major depressive disorder, were rolled out in five months. Everyone’s watching to see how well the company can generate revenue and move forward.

Auvelity is the first orally administered product with a novel mechanism of action to enter the market in more than 60 years, the company said. It was released on October 20, meaning revenue earned won’t be reported, but the upcoming earnings release will show a full quarter’s sales of Sunosi.

The company’s first revenue was reported in the second quarter of this year. Analysts expect the latest earnings report to show $16.2 million revenue growth, which would be an 83.6% increase from $8.8 million quarter-over-quarter.

Even with revenue growth the company isn’t going to be profitable any time soon.

Analysts expect net loss of $44.9 million, or -$1.03 earnings-per-share. A year earlier, the company’s loss was $34.9 million. Chris Howerton, an analyst at Jefferies, said the company won’t be cash generating until 2025.

“The top line is impacted by the debt repayment,” Howerton said in reference to the $300 million existing loan the company used funds from to acquire Sunosi. He added that, “[Axsome] could become profitable within the next two, three years if everything works well.”

Axsome touts its digital platform as the driving force behind its current revenue numbers. During the latest earnings call,  Senior Vice President of Commercial and Business Development Lori Englebert said the official launch of the system was both successful and a learning experience ahead of the Auvelity rollout.

The sales team uses the platform, which includes specialized tools, data and analytics, and integrated systems, to communicate with physicians. It was first implemented to market Sunosi.

In May, Axsome acquired the drug and an unknown number of representatives, from Jazz Pharmaceuticals Inc. for $53 million, and royalties on current net sales and of future indications using the same product.

Axsome did fairly well in the first half of the year compared to the overall market because of Sunosi’s revenue and the lead up to Auvelity’s Food and Drug Administration approval. The healthcare industry, especially in health indexes, which are usually seen as a defensive area of the market, had stock volatility because of rising interest rates, inflation and the threat of a looming recession. 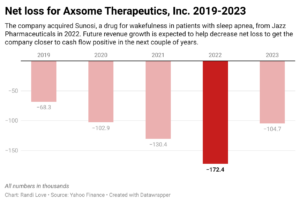 Yatin Suneja, the managing director at Guggenheim Securities, said a third-party aggregator is collecting data on the number of Rx’s being written and that the metric is one key component.

“If [Axsome] can launch this and make this a billion dollar product, this will be a much bigger company than it is right now,” Suneja said.