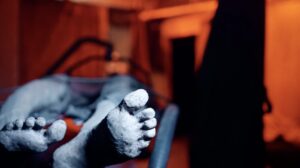 A screenshot from the trailer of “Swamp Zombies 2” (2018), an independent horror film streaming on Tubi.

Newton Wallen fell in love with horror movies as a kid who browsed the aisles of his local video rental store.

“They have this weird juxtaposition of Oscar-winning movies alongside, you know, Antropophagus, the disgusting Italian horror film,” said Wallen, whose film company Schlock and Awe operates out of Allentown, Penn. Discovering so-called garbage movies is part of the fun, he said.

Film buffs like Wallen who enjoy B-list entertainment have helped boost Tubi’s popularity over the past few years. Viewers streamed a record 1.3 billion hours on Tubi and the streaming service raked in $165 million in the September quarter, a 30% jump in revenue from the same period a year prior. A streamer whose annual revenue was just $145 million when it was first acquired, Tubi is projected to become a $1 billion business by 2023.

This year, with a recession looming, Fox fears shrinking advertising dollars and cord cutting may cut into its traditional anchors of profit, cable news and live sports. The company hopes Tubi will offset those possible losses, as customers looking to tighten belts may turn to a free streaming service. 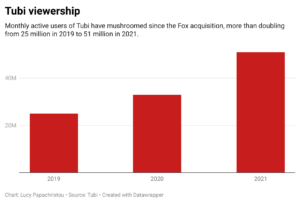 With the largest exclusive library of any streaming service—nearly triple the size of Netflix’s—Tubi boasts over 41,000 titles, but doesn’t have blockbuster programming like HBO’s “House of the Dragon” or Amazon’s “Lord of the Rings” show. The creative minds at Tubi understand they need to flood the platform with more and newer offerings to keep viewers interested.

Led by chief content officer Adam Lewinson, the former head of programming at the free video service Crackle, Tubi’s current strategy is to acquire exclusive rights to specific kinds of shows and movies and, increasingly, produce its own. The service has premiered more than 50 original projects to date. Part of the solution is coming from people like Wallen: B-list horror movie buffs.

“Swamp Zombies 2” (2018), a horror film Wallen wrote and starred in, is available to stream on Tubi. “It’s pretty cool that people watched our little dumb movie that I threw together over a couple weekends with some friends,” Wallen said.

“We continue to superserve viewers with streaming’s biggest free collection of Halloween titles,” Lewinson said last month, announcing the return of the annual programming “Terror on Tubi,” which brought 13,000 scream-filled movies and TV shows to Tubi this October, including six originals. The goal is to build the streamer into “an essential destination for genre fans,” he said.

The free service is already a destination for some dedicated fans. Patrick Shaw, a 38-year-old content editor in the Bay Area, tunes into Tubi regularly to watch horror and action movies—“cheesy, low-budget and ‘so-awful-they’re-entertaining’ films”—and posts humorous reviews of the films on a Twitter account.

Genre breakdowns of free streaming services show Tubi is over-indexed in horror compared to its rivals. The platform boasted 2,142 horror titles as of this September, according to data from Ampere Analysis, a data and analytics firm specializing in media and entertainment. Top rivals like Peacock, Pluto TV, and the Roku Channel only had a few hundred bone-chillers in their libraries.

“These films make absolute financial sense for [Tubi],” said Bruce Nash, founder and president of Nash Information Services LLC, an entertainment industry analytics firm. “You can put something together that people will go to see and not spend $50 million, $100 million, doing it.”

Co-founded by a software engineer and lawyer-turned-businessman, Tubi launched its platform in 2014. Fox became interested in the streamer around the time it sold off its main entertainment production house, 21st Century Fox, to the Walt Disney Co. in 2019 to the tune of $71.3 billion.

Tubi presented Fox with an opportunity to acquire a streaming service that requires relatively little annual investment to keep running. Fox said it invested $50 million into Tubi this past quarter. The media giant currently has roughly $5.2 billion in cash on hand.

Fox acquired Tubi in 2020 for an estimated $490 million, financing the sale in part by shedding its stake in Roku, a streaming rival. The purchase has allowed Fox to create new revenue streams from its entertainment library, as customers can watch Fox-branded movies and TV shows on Tubi as well as on Fox’s television channels. Fox also hopes to use the platform to draw viewers to its marquee sports and news programs broadcast on those linear channels, where the company generates most of its revenue from advertising and affiliate fees.

Fox’s stock has fallen 16.08% year-to-date, but the company is outperforming its main rivals in the streaming wars: Comcast, which owns Peacock, Pluto TV’s Paramount Global, and Roku. The S&P 500 has dropped 16.99% this year as of market close Friday.

Fox has experienced losses this year, but it is outperforming its major rivals in free streaming. Its shares dropped sharply in mid-October on the news that Rupert Murdoch was considering reuniting the two parts of his media empire, Fox and News Corp, which split into two companies in 2013.

Fox is projected to bring in nearly $15 billion in revenue this fiscal year, a jump of roughly $1 billion from the previous year. Profits are expected to climb to $1.91 billion, a 2.11% increase from 2022. The company’s net income tumbled in the first year of the pandemic, but fiscal 2023 projections for revenue and profits surpass pre-pandemic figures. Tubi’s monthly users are expected to number 54.7 million at the end of this fiscal year. 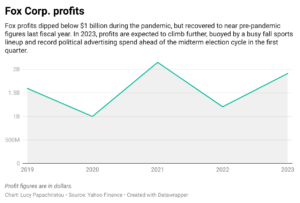 Revenue is strong this year due to a combination of increased political ad spending around the midterm elections and a busy fall sports lineup that includes the FIFA World Cup and the Super Bowl in February. Fox has also raised prices for advertising and affiliate fees, and sold 15% more ad slots in its upfront market than it did in 2021. 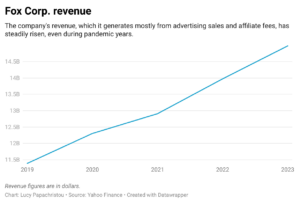 But analysts worry that in a recession, fleeing advertisers and cord-cutting viewers could put a double-dent into Fox’s bottom line.

“If there’s pressure on [advertising] spending, it will show up somewhere in the Fox complex,” said Doug Arthur, managing director at Huber Research Partners LLC.

The acquisition of cheap content like B-list horror movies is a key part of the strategy to build out Tubi’s offerings and lift Fox’s bottom line. Tubi also offers over 200 live channels of sports and news coverage in a viewing experience that mimics that of traditional linear television. Fox is betting that Tubi diehards will also watch these linear channels, which, in a downturn, will provide a much-needed revenue boost.

The streamer recently launched a new channel to watch the World Cup this fall, and also added local news stations from Scripps and entertainment channels from Lionsgate, FilmRise and Cinedigm. Total viewing time on Tubi’s live channels has grown nearly 165% year over year, the company said this fall.

Devoted horror fans hope Tubi will continue to cater to their unique tastes.

“People look at us as weirdos, but we spend our money, we show up, and we’re loyal,” Wallen, the filmmaker who wrote, produced, or acted in two films available on Tubi, said. “Tubi’s found a way to cultivate this very interesting catalog that scratches an itch that other streaming sites do not.” 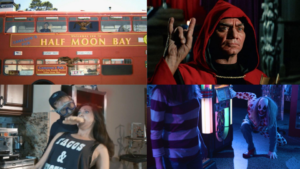 Screenshots from sci-fi and horror films reviewed by Patrick Shaw on his Twitter page. Clockwise from top-left: “Birdemic” (2010), a “so-bad-it’s-kinda-good Dollar Store-Hitchcock flick about a California town under attack from killer birds”; “The Devil’s Rain” (1975), in which a Satanic priest seeks revenge; “Clowntergeist” (2017), about a college student with a crippling fear of clowns; and “Things 4” (2017), which features “some truly wretched yet amusing filmmaking,” including “rubber toy octopus monsters.”