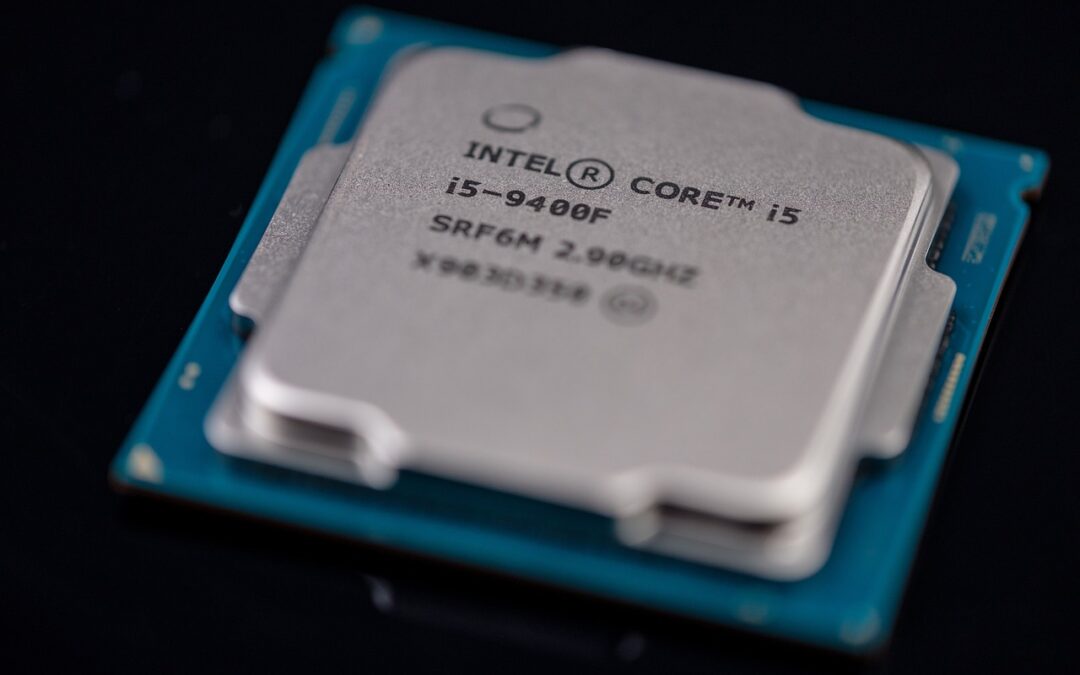 At dawn on a recent November day in New Albany, Ohio, thousands of construction workers dressed in hard hats and bright yellow vests clocked in at their job sites, tasked with turning what was once acres of farmland into a cluster of cutting-edge facilities.

“This is all about the kids, all about the children, and building a future for them,” said New Albany Mayor Sloan Spalding, adding that it’s the largest economic development investment in Ohio’s history.

The initiative is part of a shift at Intel towards becoming a producer of advanced chips for other companies, which includes additional locations in New Mexico and Arizona. But its new business will have to contend with rivals that have been dedicated to the craft for decades. As a slowing economy weighs down on Intel’s sales, Gelsinger’s vision for domestic manufacturing has saddled the company with $43.5 billion in costs over the next few years and depends on highly skilled workers that are hard to find on American soil. 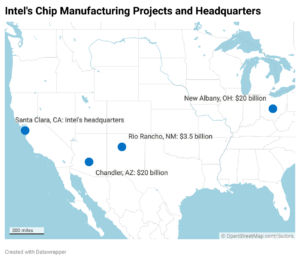 The U.S. used to be a major producer of microchips, but companies have since looked offshore in search of industry expertise and cheaper labor, tapping businesses like Taiwan Semiconductor Manufacturing Co. (TSMC) and Samsung Electronics Co. to make their products.

As China grows increasingly aggressive towards Taiwan, which accounts for 92% of the globe’s advanced chip production, according to Boston Consulting Group, the availability of semiconductors in the U.S. has become an area of concern for government agencies like the Department of Defense, which highlighted the strategic importance of chips for military purposes in a report last year.

In August, the Chips and Science Act was signed into law, which set aside $52.7 billion in funding for the domestic production of semiconductors through grants and tax incentives. Intel reached an agreement with the government to address its need for advanced chips that same month, making its new venture too big to fail, according to Northland Capital Markets analyst Gus Richards.

Intel hasn’t disclosed how much funding it will receive from the legislation, but Chief Financial Officer David Zinsner said the chipmaker should start receiving subsidies sometime next year on an earnings call with analysts. However, Intel’s competitors will also benefit from the bill. TSMC said this month it’s building another chip plant next to its $12 billion project in Phoenix, Arizona, and Samsung is constructing a $17 billion facility in Taylor, Texas.

In an attempt to catch up with them, Intel has undertaken a broad strategy to overhaul itself, which not only involves building new facilities but also pursuing an aggressive roadmap of innovations in its manufacturing processes. At the same time, Intel is restructuring itself from within to be able to work with outside customers, mirroring the services of Samsung and TSMC.

The plan was put into motion by Gelsinger last year, shortly after he rejoined Intel from VMware. He had worked at Intel for 30 years prior to his departure from the company in 2009 and had served as its first chief technology officer, managing the development of Wi-Fi and USB technology. Gelsinger was also the chief architect of a high-end processor released by Intel in 1989 and–at 61 years old–describes himself as a technologist and a geek at heart.

While retooling itself in multiple areas could put a short-term strain on Intel, Gelsinger has said his biggest priority is turning the company around over time. “I am not making decisions about the next quarter–I am making decisions against [a] decade-long strategy,” he said in an interview with The Verge.

As Intel started making sweeping changes, the company’s capital expenditures, which encompass its investments in manufacturing and design, surged 40% in 2021 from a year ago. Analysts expect they will continue to rise and increase 11.5% to $22.6 billion in 2022 and reach $23.6 billion in 2023. 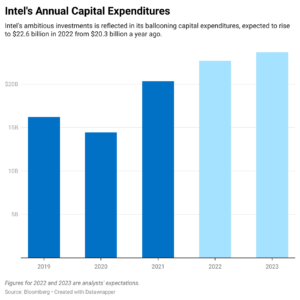 “It’s going to be very difficult for the current management to kind of navigate that for the next couple of years and maintain that level of investment,” said Rosenblatt Securities analyst Hans Mosesmann. “This is something that I think that would be very difficult for Intel to do without government subsidies, maybe impossible.”

Meanwhile, demand for Intel’s chips and data center products has cooled after a pandemic-induced boom as businesses and consumers cut back spending amid inflation and higher interest rates. Analysts expect Intel’s revenues will decline nearly 20% from a year earlier to $63.5 billion in 2022 and fall to $60.9 billion in 2023. 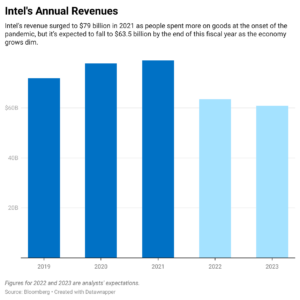 In its earnings conference for the third fiscal quarter, Intel committed to cost-cutting measures that include layoffs and floated the possibility of divestitures. It also tapped the break on its investments and lowered its full-year forecast for capital expenditures to $25 billion from $27 billion.

The investments have disrupted Intel’s profitability as it continues to spend aggressively despite a downturn in the economy. The company’s profits are expected to decline 55% from a year ago to $8.8 billion in 2022, according to analysts, and sink further to $4.6 billion next year. 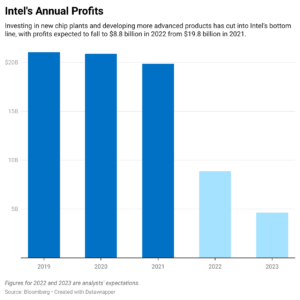 Mosesmann said geopolitical issues do give Intel value from an investment perspective, yet it will take years and billions of dollars before the company can capitalize on any domestic demand for high-end chips. The company’s stock price has short-circuited this year, down 41% to $30.35 compared to a roughly 29% drop in the Nasdaq. 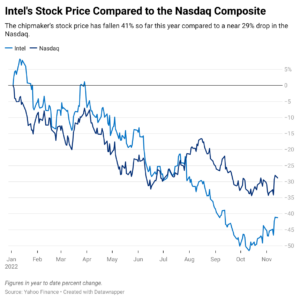 The Chips and Science Act has been championed by politicians on the federal, state, and local level. That’s because the bill has broad political support, according to Sarah Kreps, director and founder of Cornell’s Tech Policy Institute. A recent public opinion survey by the professor and a colleague found that 7 out of 10 Americans favored the initiative.

However, Kreps raised concerns about whether federal subsidies could make Intel less competitive at home and abroad. She also warned that a shift to reshoring chip plants would have negative consequences for consumers, undoing some of the benefits of globalization that have kept the costs of electronics down.

“If we’re now reshoring these industries and making manufacturing more expensive, then those costs are then going to get passed along to the consumer,” Kreps said. “I really don’t think any Americans are thinking about this.”

Intel’s chip plant in New Albany isn’t expected to start producing advanced chips until 2025 if it’s completed on time, and the project is still in its earliest stages, according to the city’s website. A fleet of large industrial vehicles could be seen moving dirt around the job site as part of the project’s groundwork phase on a broadcast from WBNS-TV in October.

Eventually, the Silicon Heartland will employ 3,000 high-tech workers, Intel expects. For the plant to function, the company needs to cultivate a workforce that can address the 600-plus steps which go into making a single chip, said Dr. Robert Handfield, a professor of supply chain management at North Carolina State University.

“Every one of those steps is unique [and] is technically difficult,” he said. “You need to have highly technically skilled people for every step of the process … and if any single step isn’t done properly, the whole [plant] doesn’t have a yield.”

To address the need for skilled talent, Intel plans to invest $50 million in Ohio’s higher education institutions and $50 million nationally to better establish semiconductor manufacturing education programs. The U.S. National Science Foundation said it would match $50 million of the funds. In its pledge, Intel acknowledged a shortage of qualified workers presents an issue to its domestic efforts.

The chipmaker has even tried to garner interest in manufacturing at a seasonal fair in New Albany known for its livestock show and rodeo by setting up displays which do “a great job at making sure that science is cool for kids,” said Spalding, the mayor. “Intel has really shown up on the scene and started integrating themselves in the community very quickly.”