New to the ad game, Netflix banks on international edge to help it cash in 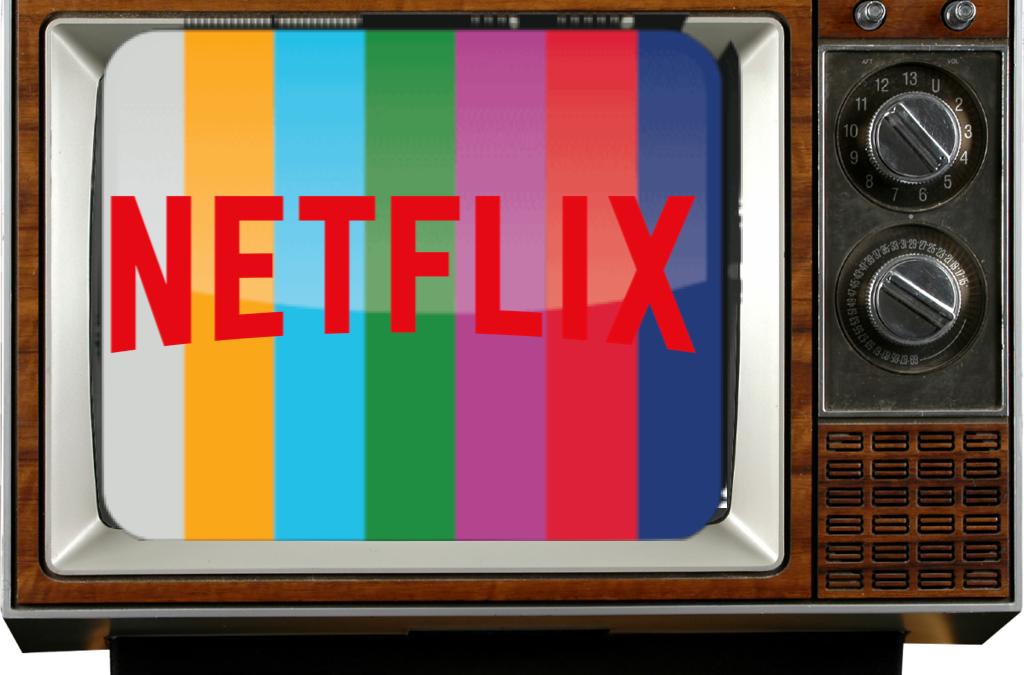 During Netflix’s third quarter earnings call this October, analysts had their sights set on the future of streaming – with ads. Following the announcement of its ad-supported tier, analysts were eager to learn about its impact in The United States. Absent from the conver sation, however, were the eleven other markets around the world that will be equally important in securing the company’s financial future.

Amid a period of slowing growth, the makers behind popular shows like “Stranger Things” and “The Crown” are looking to reignite revenue through advertising, fifteen years after launching the subscription-based streaming service. This November, Netflix debuted its ad-supporter tier, allowing customers grown tired of price hikes the option to pay less—and watch ads.

The nascent advertising business will encounter challenges in its earlier stages as the company  develops its targeting capabilities and renegotiates contracts with other content providers to place advertisements across its entire video library.But as Netflix contends with a widely-anticipated global recession that threatens to slash global ad budgets, it will derive its strength from its international edge. The most popular and ubiquitous streaming service worldwide, the company is betting that this global footprint will give it a leg up in selling ads to growing markets in Europe, Asia, and Latin America.

Netflix’s revenue in the Asia-Pacific region is projected to increase by 20% over the next five years, and by 18% in Western Europe, according to a study conducted by Ampere Analysis, a global entertainment marketing research firm. By contrast, revenue will increase by only 3% in North America, traditionally Netflix’s biggest market.

“Western Europe will be critical because of the higher advertising rates in the region,” Ben French, an entertainment and media analyst at Ampere, said in an email. “Asia Pacific will benefit the most due to growing economies in the region.”

Ampere expects Netflix to gain 9 million new subscribers outside the U.S., compared to only 2.5 million in the American market by 2027.

Many of Netflix’s recent hit shows are produced outside the U.S. and geared towards international audiences, like “Extraordinary Attorney Woo,” “Narcos,” and “Indian Matchmaker.” “Squid Game,” the South Korean survival drama, is the platform’s most popular title of all time, with its first season streaming a record of 1.65 billion hours within the first four weeks of its premiere.

The ad-supported tier launched in early to mid-November in the United States, Mexico, Canada, the U.K, Australia, Japan, Brazil, France, Germany, Italy, Spain and South Korea. Those markets account for roughly $140 billion of brand advertising spend across TV and streaming, or over 75% of the global market, Netflix said.

“An ad-supported tier will be more popular in the international market,” said David Hager, a senior equity analyst at Edward Jones covering streaming and advertising businesses. The cheaper service will attract more audiences in markets where Netflix is less popular and more cost-prohibitive, including in Asia and Latin America, Hager said.

Digital advertisers are expected to spend big. Global ad spending across platforms is forecasted to grow by 23% by the end of this year, reaching $63.2 billion, according to a report published by Dentsu International, a digital marketing communications company in London.

In India alone, digital advertising spend is expected to grow by nearly one third by the end of the year, according to Dentsu International. Digital spending in Latin America is expected to grow 36% year-over-year in 2024, compared to 4% in North America.

Netflix announced its ad-supported tier rollout earlier this year amid increased competition in the streaming landscape. Entertainment powerhouses like Warner Bros. Discovery and Paramount Global were able to create new revenue streams by creating or purchasing ad-supported streamers to monetize their large content libraries. Netflix, by contrast, doesn’t have a vast library of original content.

In the years when its subscriber base was ballooning, Netflix didn’t need to transform into an ad-supported business. Stay-at-home orders during the pandemic brought millions of new subscribers: some 60 million in under two years. Revenue rolled in, rising 20% year-over-year in 2021.

But in the first months of 2022, the company’s subscription business wavered. Fueled by higher subscription costs, Netflix's departure from Russia, and changing consumer behavior, the company began to reconsider its hard stance against advertising. By the end of the second quarter ending in April, Netflix had bled over 1.2 million subscribers globally. 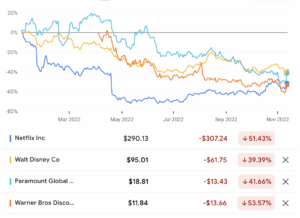 Media and entertainment stocks are down for the year, faring worse than the S&P 500. Netflix has recovered slightly from its 60% drop earlier this year.

Netflix’s stock has fallen 51% year to date, compared to the S&P 500, which is down 16% for the same time period. Netflix anticipates it will generate $31 billion in revenue in 2022, up from $29 billion the year prior. Its net income is projected to fall 1.4% from last year, to $5.04 billion, as the company receives lower returns on subscriber revenue due to a strong dollar and weaker foreign currencies.

Over this summer, Netflix began to build out its advertising team, tapping experienced advertising executives and partnering with Microsoft to develop its technical capacities.

“Microsoft was selected because they're not their core business and they do have somewhat of a relationship with Madison Avenue,” said Brad Adgate, an independent media consultant and former executive at Horizon.

Netflix also poached Jeremi Gorman, a former executive at Snap Inc., which makes its core revenue from advertising, to serve as the company's new president of worldwide advertising. Peter Naylor, another new hire, had spearheaded advertising sales at Hulu, a major streaming competitor.

“We will have hundreds of advertisers worldwide at launch — from major automakers to CPG companies, leading travel, retail, and luxury brands,” Gorman said prior to the launch. By mid-October, the company had nearly sold out its advertising slots, bringing in top brands like L’Oréal, Nyx, Louis Vuitton, and Budweiser.

For advertisers around the world, Netflix With Ads, as the new ad tier is known, presents a unique opportunity to expand their reach to younger audiences who prefer streaming to linear television.

Netflix won't have the demographics data of other advertising options, but hopes to fill the gap with audience metrics. Currently, Netflix can target ads based on programming genres and geo-targeting, based on location. But it is only beginning to collect user data on age, gender, and other demographic data.

“If you're paying for the Netflix ad supported model, you're probably trying to be frugal and save some money. So you likely won’t respond to an advertisement for Balenciaga,” said Tai Chen-Bassin, the head of communications at RadicalMedia, a global media production and advertising firm.

Netflix is hoping to offset the lack of targeting options at launch by providing audience metrics to advertisers. The company partnered with Nielsen in the U.S. and BARB in the U.K. and will work with DoubleVerify and Integral Ad Science to verify ad impressions and traffic. Audience breakdowns for the new ad tier won’t be available until next year.

Not all of the streamer’s content is available to customers paying less for an ad-supported experience. About 5 to 10% of the programming on Netflix won’t be available on the ad-supported tier due to licensing agreements that prohibit ad placement. Popular shows such as “Arrested Development,” “New Girl,” and “Friday Night Lights” are among those locked out to advertisers.

Nonetheless, studies show audiences worldwide are willing to watch advertisements on their shows. Over 90% of TV viewers surveyed across Latin America use streaming services daily, and of those, three-quarters said they prefer to watch free or reduced-cost ad-supported programming, according to a survey conducted by Maginite, an online advertising technology firm.

As users migrate to streaming services, “brands will find consumers where they are,” according to Iván de Cristobal, the managing director of AMT Comunicación, a creative ad agency based in Spain. The key to advertisers' success on streaming platforms like Netflix will be in their ability to integrate ads organically in a way that users embrace, de Cristobal said.