Ahead of Kellogg’s Split, the Outlook for Its Cereal Business Doesn’t Look Gr-r-reat 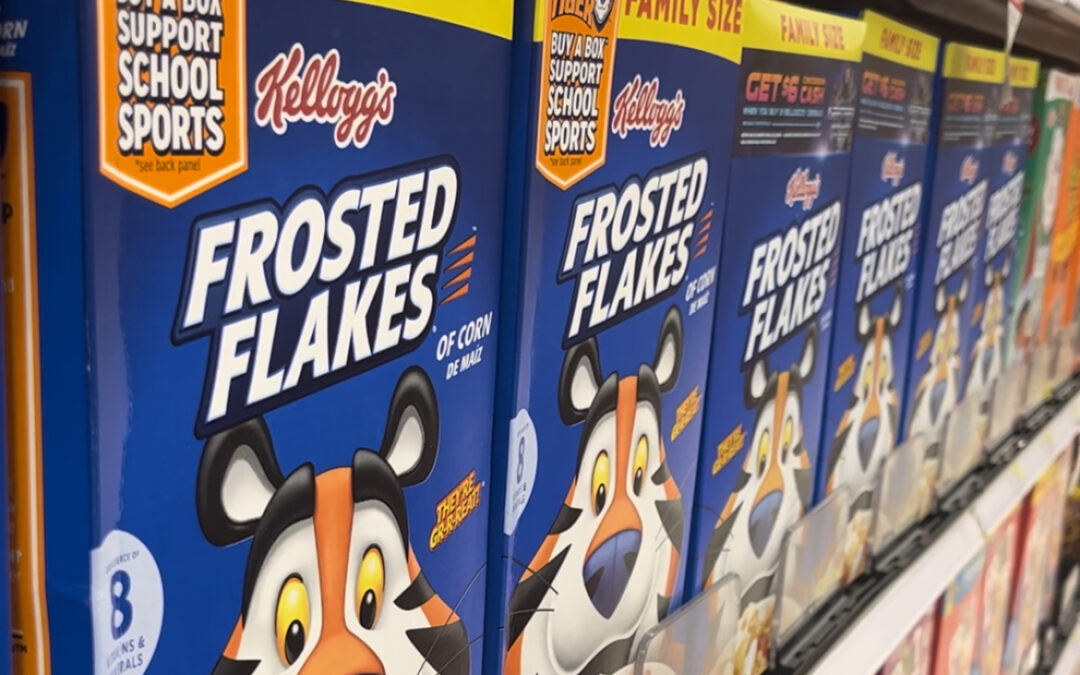 For the past seven years, Dan Goubert has spent his free time writing over 600 reviews on cereals from various companies for his blog, Cerealously. As a “self-professed cereal addict,” Goubert feels as though legacy brand Kellogg has not been performing as well as it can against its competitors in the cereal industry.

“I’d say Kellogg’s is the middle-of-the-road contender lately when it comes to the big three cereal brands,” said Goubert. “They have introduced creative partnerships with brands like Little Debbie, movie tie-ins like Pandora Flakes, as well as interesting ideas like the Insta-Bowls, but the execution tends to be hit-or-miss.“

For over a century, Kellogg has created a legacy in the cereal industry by loyal customers connecting with memorable personas such as Tony the Tiger and infectious slogans like “Follow my nose! For the fruity taste that shows!”

But in more recent years, this legacy has diminished as a shift in company leadership forced cereal to take a backseat in lieu of the more fast-growing global snack portfolio. Cereal sales have since fallen, only making up a mere 16% of Kellogg’s total sales. Now as Kellogg prepares to split into three separate public companies, the future cereal company remains the runt of the split as it is the least attractive for investors and continues to struggle from previous obstacles.

“The plant Industry is very likely to have a higher P/E ratio, then next come snacks,” said Gene Detroyer, professor of finance and economics at the University of Sanya, before adding that the cereal business would produce stable at best returns.

Soon after Steve Cahillane became Kellogg’s chief executive in 2017, he planned to steer the company to faster sales growth by investing more in its snacking portfolio, which brought in 52% of net sales at the time, and its presence in emerging markets world-wide. The priority came as consumers shifted away from having traditional sit-down breakfasts. A company survey had shown that only about a third of Americans were eating breakfast in the morning.

“What we formerly referred to as ‘Win in Breakfast’ becomes ‘Win Through Occasions,’” said Cahillane at a 2018 analyst event in New York. “Breakfast is a key occasion, clearly, but so is late-night snacking and on-the-go meal replacement and a snack as a meal accompaniment.”

The difference between the company’s innovations between 2018 and 2019 are stark. While 2018 was spent releasing a strawberry-flavored version of its classic Rice Krispies, bringing back the beloved Honey Smacks cereal to store shelves and debuting a new better-for-you Special K with 15 grams of added protein, Cahillane strayed away from these brands in 2019. Instead, snacks took center stage as the company announced new pretzel-flavored Pop-Tarts, Pringles Roasted Turkey Crisps and a collaboration with Marvel’s Spider Man: Far From Home and some of its non-cereal brands.

Cahillane’s efforts paid off as the company entered the pandemic. Snack sales pushed net sales up 31% by 2021 and continue to drive sales for the company. Analysts predict the company this year will bring $15.1 billion in revenue, an 11% increase from 2021. Profit is projected to increase 19% to $1.49 billion. 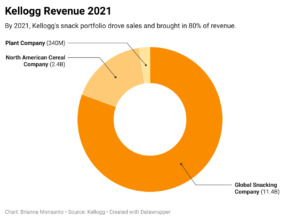 Cahillane is now overseeing Kellogg’s split into independent public companies that are focused on selling snacks and other food products worldwide, cereal in North America and plant-based foods. The separations of the cereal and plant-based food businesses are slated to be complete by the end of 2023.

It’s unclear how the future cereal company will fare as a standalone business. Gary Pilnick, Kellogg’s current legal chief, is slated to run the business. While analysts are quick to point out how the split can greatly benefit the future snack and plant-based business, analysts project weaker profitability for the cereal business than the other two.

“Part of our thinking was that it would enable them to garner a higher multiple for the global snacks business which is likely being discounted as it’s wrapped with the mature North American cereal business,” said Erin Lash, director of consumer sector equity research at Morningstar research firm, about the company’s plan.

Lash compares the prospects of Kellogg’s cereal business to Kraft Heinz. In 2012, the company completed a spin-off of its North American grocery business and its global snack company, known today as Mondelēz International. Shares for Mondelez International have since skyrocketed 224% while shares for Kraft have plateaued in recent years, falling 17% since 2012.

However, even stable returns are in question as the cereal company continues to deal with pandemic-related challenges. Similar to its competitors, Kellogg has continued to grapple with lasting pandemic-related supply chain disruptions and inflated costs of ingredients.

Kellogg also faced a couple of company-specific obstacles last year that has weakened its cereal business even more. Not only did the company experience a three-alarm fire at its Memphis cereal manufacturing plant in July of 2021, but it was later hit with a three-month labor strike of over 1,000 workers from all four of its U.S cereal manufacturing plants. The combination of the two has resulted in a blow to its cereal sales as inventory levels remain lower than where they should be. Net sales for North American cereal fell 14.4% between 2020 to 2021 – the largest drop in sales for its morning foods in the last decade.

“The cereal industry isn’t growing,” said Detroyer. “It’s just you know it’s really pretty flat and not growing even as much as the population.”

Kellogg is expected to bring in a $15.44 billion revenue in 2023, with about $2.4 billion coming from its future cereal company. As the company enters the split, one of the best outcomes it could have is piquing the interest of prospective private equity buyers looking for a quick way to enter the market.

“We think that that is a business that could ultimately, [be a target for] financial buyers potentially given the profitability that the business has when it is when the issues as it relates to the strike and fire from last year are put to rest,” said Lash.

For fans of the cereal brand, the split brings up optimism that the new focus will allow for the innovation they were once familiar with.

“I think they need to be more forthright about deeper flavor infusion and rely less on the familiarity of legacy brands,” said Goubert. “It also wouldn’t hurt to introduce new, permanent cereal brands instead of retreading the same riffs on Frosted Flakes again and again