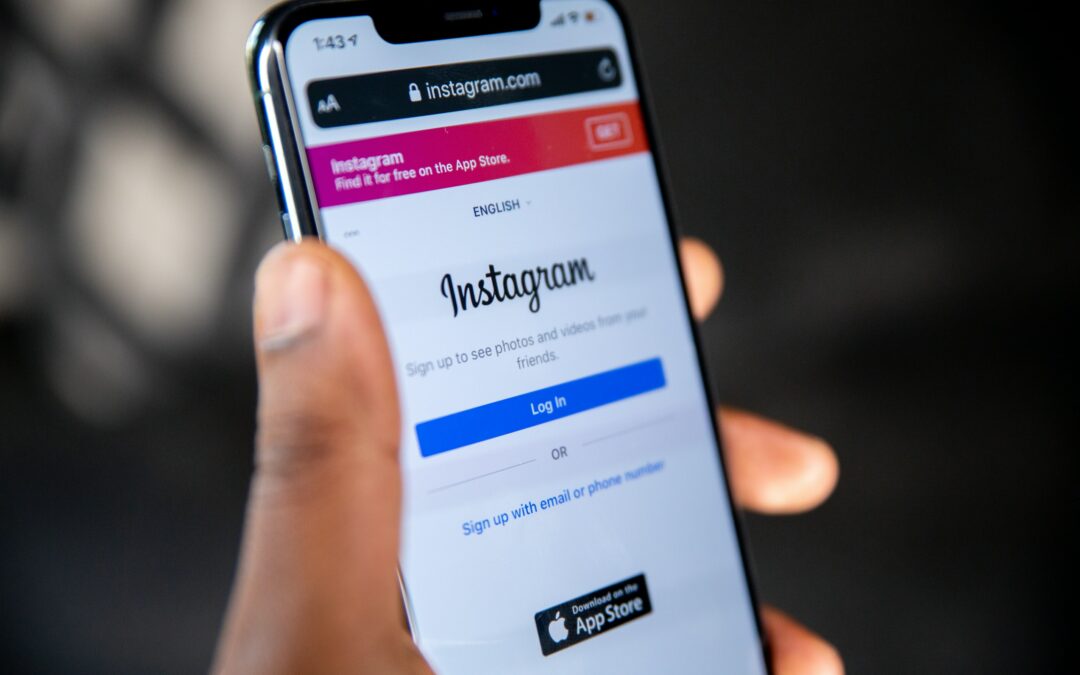 Nathan Friehofer has a half-million followers on Instagram, where he shares comedy and weightlifting videos. His page includes sponsored posts for protein powders and McDonald’s. He regularly racks up hundreds of thousands of views on Instagram’s Reels, a short-form video feature akin to TikTok.

But Friehofer said he’s spending more time in other corners of the internet, like on the Alphabet-owned video site YouTube. On his favorite app, TikTok, he has more than 6 million followers, and his videos have racked up more than 500 million likes.

“They have the coolness factor,” Friehofer said about TikTok. “I don’t know people spending a lot of time scrolling through Instagram Reels.”

Meta Platforms introduced its short-form video feature Reels, available on Facebook and Instagram, in August 2020. The feature was a response to TikTok and an answer to falling advertising revenue, caused by stricter ad tracking rules and a slowing economy. Reels drives $3 billion in annualized revenue, less than 3% of the company’s total revenue from the last year. Meta is investing heavily to grow viewership and earn more money from the feature. But, while Reels is a useful addition to Meta’s social media presence, many experts feel it can’t fix the company’s multi-billion dollar ad earnings shortfall.

“Reels won’t fix advertising dollars,” said Jon Woo, an analyst at Phillip Securities. “But this can position the brand a little bit better for future growth.”

Meta users are watching 140 billion Reels daily, a 50% increase from six months ago, according to the company’s third-quarter earnings call in October. Meanwhile, TikTok users watch as many as 240 billion videos a day, according to research from Statista. The average TikTok user spends 52 minutes daily on the app, while Instagram users scroll the app 28 minutes a day.

Zuckerberg has said that Reels is one of three primary focus areas for the company, as well as the metaverse and messaging platforms. “We want this [Reels] to be a tailwind, not a headwind. I think we’re going to get there,” said Meta Chief Executive Officer Mark Zuckerberg at the October earnings call. “I think that’ll just take some time.”

Meta is reeling as external factors have hurt ad earnings over the last year. Apple’s stricter ad-tracking policy cut $10 billion of revenue, Meta announced during a February earnings call. TikTok has lured away users thanks to its role as a trendsetter for younger users. Meanwhile, the slowing economy may keep earnings down, as ad spending tends to fall during colder economic times.

Overall ad revenue has continued to fall even while Reels viewership has grown. Some analysts aren’t optimistic about Reels getting Meta’s core social media business back to where it needs to be. For much of the last decade since going public, Meta — then known as Facebook — experienced regular double digit jumps in ad earnings, driving the company’s previous $1 trillion valuation.

“The days of significant double-digit growth are now in the rearview mirror,” said Dan Ives, managing director at WedBush Securities. “Times have changed. Even when the economy picks back up, it isn’t going to be rainbows and roses.”

Wall Street has noticed, with Meta’s share price plummeting more than 67% in 2022, making its performance slightly worse than Bitcoin, which has fallen about 65% for the year. Meta’s stock closed Monday at $109.86, the lowest price since 2016. The tech-heavy Nasdaq Index is down 29.4% in 2022.

That stock crash has increased the urgency for Reels to fix Meta’s social media business while Zuckerberg focuses on metaverse projects. “I’m trying to balance that urgency with making sure we don’t make any mistakes by pushing too hard or too fast,” Mosseri told Bloomberg.

Despite the encouraging engagement numbers, earning money from short-form video has proved challenging for all platforms. Meta’s average price per ad has decreased by 18% over the last year as the company has pushed Reels. Some of that drop is due to Meta’s growth in emerging markets, but it’s also because advertisers are less willing to spend on a platform where they have yet to figure out a winning formula.

“There’s a huge built-in knowledge base among companies about how to advertise with Instagram and Facebook,” said Bill Herman, a business professor at the Metropolitan State University of Denver. “With Reels, that knowledge is useless.”

Short-form video “closely resembles that ‘lean back’ behavior of watching TV,” according to a report by Bernstein Research. “Sure you’re swiping away but is that really any different from changing channels on a remote?” Viewers of lean-back media tend to pay less attention to ads or skip them altogether. Users on Reels and TikTok can skip ads with a simple finger swipe.

Other tech companies reliant on advertising for revenue have struggled in 2022, though few have suffered as much as Meta. At Alphabet, Google recently posted its fifth straight quarter of slowing sales growth. In October, YouTube reported its first revenue drop since its parent company began sharing revenue figures for the video platform.

Meanwhile, TikTok parent ByteDance has spent billions to grow its user base in recent years. The company reported a $7 billion operating loss in 2021 but a slight operating profit in the first quarter of 2022, according to the Wall Street Journal. But, TikTok has proven its ability to shake up the industry, regardless of its earnings.

The impact has been a chunk out of Meta’s revenue. In Meta’s third-quarter earnings call, revenue fell to $27.7 billion, a 4% decline from last year. It marked the second straight quarter of declining income. The company is on track for revenue of $116.1 billion in 2022, with analysts forecasting $121.9 billion for 2023.

Recently, the falling revenue has been paired with rising expenses, largely due to increased spending on the metaverse. Reality Labs, Meta’s VR business, has lost $10 billion in 2022. After a disappointing third quarter, Meta is expected to finish 2022 with $24.1 billion in profit, a sharp fall from $39.4 billion last year. Analysts are projecting $20.7 billion in profits for 2023, on average. 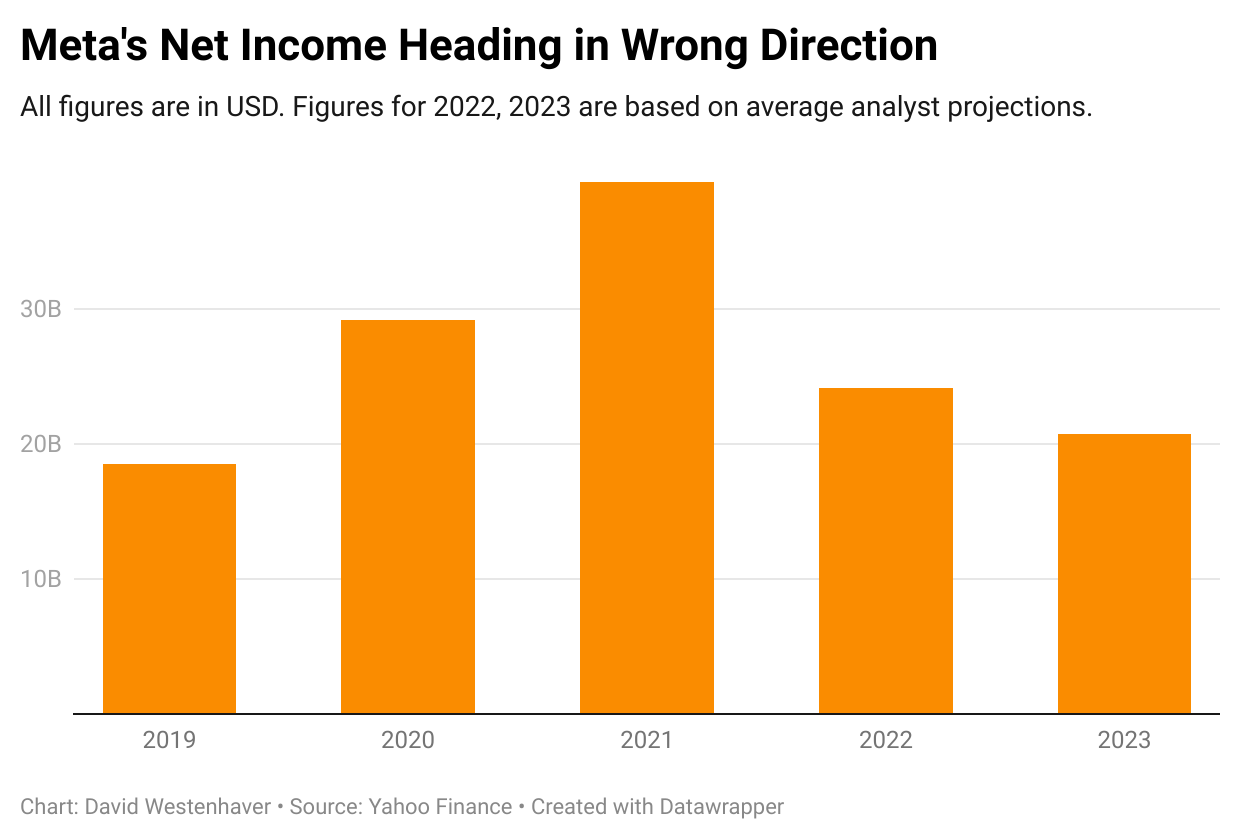 Some analysts have urged Zuckerberg to steer investment away from the metaverse and back to the core business and features like Reels. The most recent earnings call included an increased focus on investments in AI to boost Reels.

“Any investment is only going to make Reels better as the recommendation engine improves,” said Mark Shmulik, senior analyst at Bernstein and Co., referring to Reels’ growing engagement numbers. “They’re doing something right.”

Despite the enthusiasm for increased investment, analysts are worried about the long ramp-up before Reels can become a major driver for the company. Some are skeptical that Reels can save Meta altogether given the small percentage of revenue the feature is responsible for.

“Social media is an arms race, and TikTok has completely changed the dynamic,” Ives said.

For Nathan Friehofer, TikTok is the starting point for every video he produces. He gets ideas from TikTok, makes videos on the platform, and only reposts his best-performing videos on Instagram Reels. In some ways, Friehofer still thinks of Instagram as a photo-sharing platform, despite the intentions of Adam Mosseri.

“It’s like they don’t know exactly what they want to be,” Friehofer said. “They’re just trying to be TikTok now.”