The Pandemic Is Ending, but Its Boost to the Online Farmers’ Market Will Last 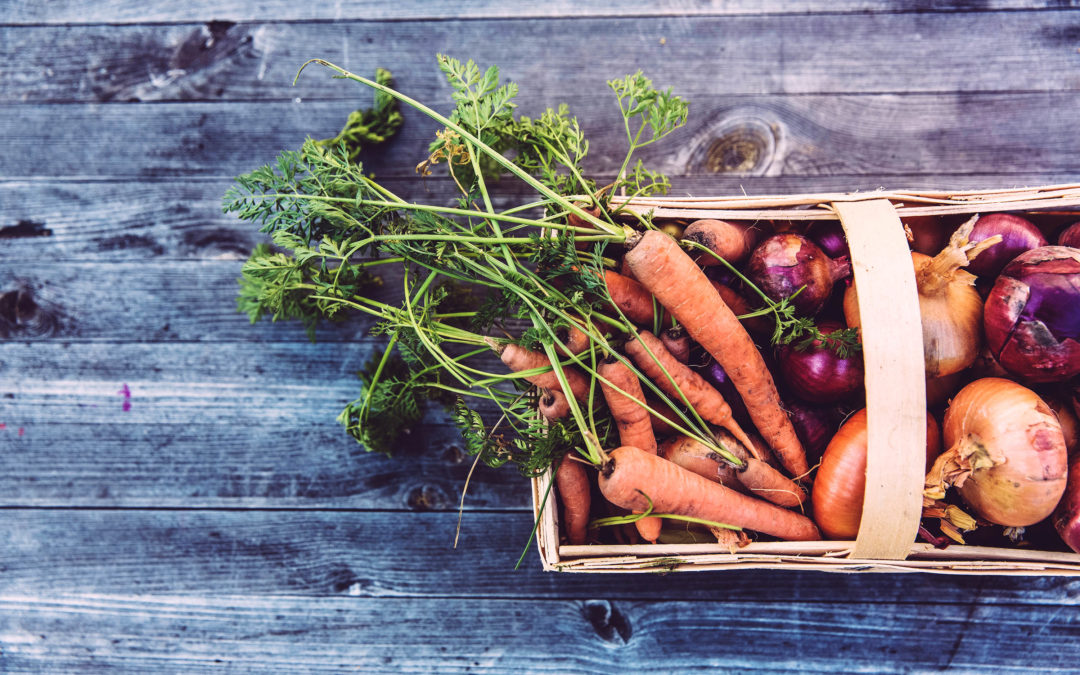 When the pandemic hit in March 2020, Rhea Choi, a freelance digital marketer based in New York City, went into survival mode and stocked up on whatever food and toilet paper she could find in large supermarkets. After a few months of being stuck inside and spending more time than usual in her kitchen, she began seeking out organic or local food delivery services.

Before the pandemic, her grocery cart was full of canned and genetically modified organism (GMO) foods. But as the public health crisis dragged on, she became ready to spend more for higher nutritional value and quality.

“I thought it was a great time to try everything to build a strong body,” said Choi. “And I spent less elsewhere. I didn’t buy clothes. I didn’t wear makeup or fragrances. I rarely went out to eat.”

In the beginning, she used Whole Foods Market delivery and then broadened her choices to online farmers’ markets, which delivered fresh vegetables, grass-fed meats and organic fruits from local farmers directly to her doorstep.

“My sister and best friend also started ordering organics and local foods online,” she said. “It was becoming a thing.”

With attention to wellness and home cooking skyrocketing, the pandemic has accelerated organic food sales and local food movements. In fact, the U.S. organic food market was worth over $8.5 billion in 2020, according to the Organic Trade Association (OTA), and a 2019 Nielsen survey found that buying local food is a priority for 46% of American consumers. At the same time, the pandemic has turbocharged online grocery shopping, since many consumers have refrained from going out. Online organic produce services and farm-to-table businesses, including online farmers’ markets, also benefited from the trend.

As the pandemic is winding down, organic and local food businesses see the pandemic boost as long-running, notably in one retail channel: the online farmers’ market.

Even before the pandemic, ethically produced or locally sourced food movements were gradually gaining momentum. The 2015 Local Food Marketing Practices Survey, the most recent available by the U.S. Department of Agriculture (USDA), shows that 166,000 American farmers earned $8.7 billion by selling food locally through direct marketing channels that year — a jump of 13,6000 farmers recording $1.2 billion in their receipts in 2007.

But before the pandemic, consumers who bought organic produce at farmers’ markets or planned their meals around Community Supported Agriculture (CSA) subscriptions were clustered in metropolitan areas like New York. 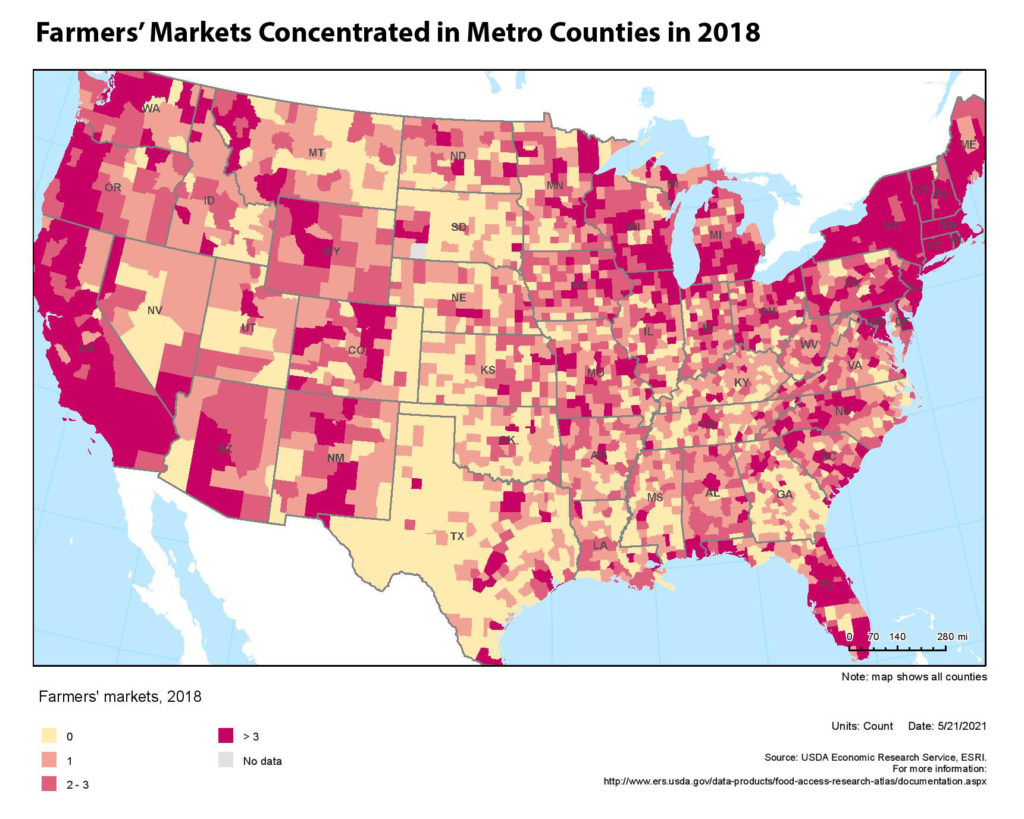 “The pandemic has broadened the market across the country, and it has also improved accessibility with direct-to-farm orders,” said Carolyn Dimitri, an associate professor of nutrition and food studies at New York University.

During the pandemic, consumer demands for healthier and fresher food have expanded across the nation. According to the State of Organic 2020 by the Organic Produce Network (OPN), organic produce sales recorded a 14.2% uptick in 2020, an increase of $1 billion to $8.5 billion that outpaced conventional produce sales. In the first quarter of 2021, last year’s growth continued, with a 9.3% increase over the same period in 2020, according to the Q1 2021 Organic Produce Performance Report by OPN and Category Partners, a data and research company.

Yet despite the popularity of organic and local products, American shoppers have different definitions of “local.” Many are also still confused by “organic” and “local” labels and tend to put both in the same category, “healthy food.”

Over 20,000 respondents to Nielsen’s 2019 survey said that for some products, “local” means they were sourced in the same city, while for others, the label means the products came from within the state or the U.S.

In addition, research by the International Food and Agribusiness Management Review showed that 17% of U.S. and Canadian consumers believed – incorrectly – that “organic” also meant locally grown, and 23% incorrectly explained that “local” produce was grown organically. The research also found that 40% of shoppers said they thought organic food was more nutritious than conventional products, while 29% replied that local products were more nutritious than food imported from abroad.

Throughout the pandemic, experts said they paid attention to diversified food sources. They emphasized the significance of local farms brought into the on-demand economy through online farmers’ markets.

Direct-to-consumer organic produce sales, which accounted for 18% of all organic sales in 2019, have risen during the pandemic and will continue to grow after it ends.

“Local farmers all around the country had to pivot their business models and find ways to meet the demands without in-person contacts,” said Dimitri. She said many small farms in New York State adopted by starting online ordering and home delivery after the Covid-19 business restrictions left them fewer routes to sell at farmers’ markets. Some farmers’ markets shut down, and shoppers avoided shopping in-person at local farmers’ markets. 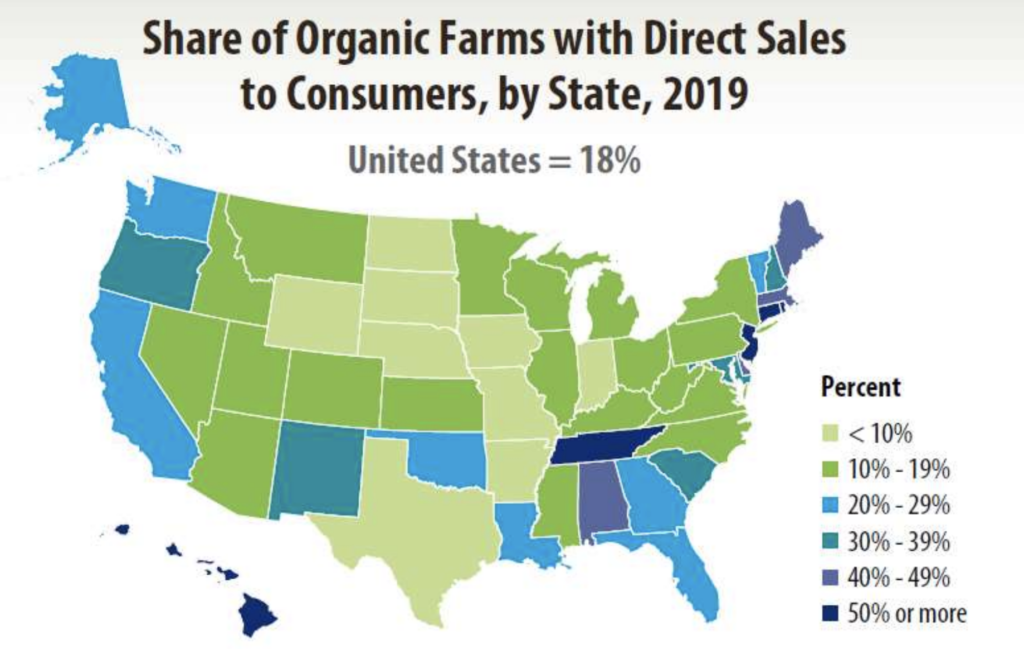 Ann Jung, co-owner of WeRubYou, a Korean sauce-maker based in Brooklyn, N.Y, who has developed various online marketing channels, said that by selling to home cooks instead of restaurants, farmers and producers can raise their revenues to all-time highs.

Farmers can also use online farmers’ markets to complement in-person relationships, sharing knowledge and connecting with customers and other farmers, according to a study published in January in Nutrition Journal.

Once the retail route is developed, it is probably here to stay as online farmers’ markets make organic and locally produced food more accessible to busy but motivated consumers who like their simplicity.

Despite flourishing farmers’ markets and CSA programs, the main avenues to pick up high-quality ingredients directly from local farms, many Americans who could not travel to farmers’ markets or deal with complicated CSA subscription systems still had trouble finding organic food. But simple tech tools have provided a more consumer-focused sales platform to farmers: online farmers’ markets.

Seven years ago, when elementary school teacher, Dana O’Brien, moved to Sunset Park, Brooklyn, buying all her groceries for the next few days at a farmers’ market was no longer an option. Her old neighborhood had large farmers’ markets, but Sunset Park had only small ones without a wide range of products.

“You can pick up a few things but you cannot do the whole grocery shopping,” she said.

Prior to the pandemic, she was shopping mostly at local supermarkets and not buying organic or local food. Still, she said, she has been thinking about eating organic and local food for a long time.

When the pandemic began and she became too cautious to go to grocery stores, O’Brien thought it was a good time to try farm-to-table online delivery services and looked up the CSA program. But its sign-up procedures and required volunteer work overwhelmed her.

“It was a little too much of a commitment for me,” she said.

Many CSA programs have seasonal subscription options, which means subscribers have to be prepared to keep receiving food boxes for at least three months. Most CSA boxes are limited to one farm’s products, and consumers have no choices and no idea what they will receive. She needed a little more flexibility for her meal planning.

After a few rounds of searching online, O’Brien landed on Farm to People, an online farmers’ market that offers customizable organic and locally sourced produce boxes. With a few clicks, she could order almost everything she needed and could easily schedule a delivery of the freshest food, 75% of which is eco-friendly and produced within a 300-mile radius of New York City. In addition to information about the farm and its agricultural practices, she received information about the ingredients like when they are in season, how to keep them fresh and how to cook them.

“Farm to People was the perfect halfway point of the CSA for me, where there is a connection to local producers, fresh ingredients and seasonal food,” said O’Brien.

Online farmers’ markets give grocery shoppers not only more flexible subscription choices but also more affordability and a variety of organic produce. O’Brien said she was surprised because she thought online farmers’ markets were going to be more expensive, but her grocery budget over the past 12 months stayed exactly the same as when she was shopping at her regular grocery store.

“Online gives a little more control of your spending,” said Dimitri, because people do less impulse shopping when they fill their online grocery carts. Organic produce generally sells for premium prices at retail markets, she said, but buying groceries directly from local farmers can lower the prices.

While major grocery stores had empty shelves and delivery services were out of stock last year, online farmers’ markets have seen a major uptick in their sales. Rachel Steinhauser, marketing director at Farm to People, said interest in its service peaked last summer. The toughest problem the company faced amid the pandemic, she said, was securing space to meet additional demand.

“We had the capacity to accept new customers because we were a really small team back then and we were hungry for new customers,” she said.

In fact, Farm to People’s sales increased sixfold in 2020. The company moved to a bigger warehouse and expanded delivery from two days a week to six. Steinhauser said the growth was slow but continuous.

“The good news is that people are sticking around,” she said. “People love what we are doing.”

Choi and O’Brien admitted they were already eating out more in the last few weeks than they had before. But both said they would not change their grocery shopping habits.

“At this point, I really don’t have any intention of stopping,” said O’Brien. “It’s been good for my budget, and I’ve been introduced to a lot of new food and I’ve been cooking more.”

Kathy Murray, a longtime CSA subscriber and farmers’ market shopper in Midtown Manhattan, praised online farmers’ markets for being easier to use. She immediately subscribed to several online farmers’ markets, including Farm to People after the pandemic broke out, and now she does not want to give up the convenience. She said that ordering organic or local food online and receiving boxes every few days became her “lifestyle.”

Brandon Rael, strategy and operations delivery leader at Reach Partners, a management consulting firm in Austin, T.X, agreed that the organic and local food movement would not slow down post-pandemic. He said online farmers’ markets would help farm-direct sales go mainstream and attract new customers with their consumer-focused services.

Rael pointed out that value-based consumerism is alive, and consumer behavior increasingly relies on e-commerce.

“We should expect the digital farmers’ markets to continue to thrive during and after the pandemic,” he said.